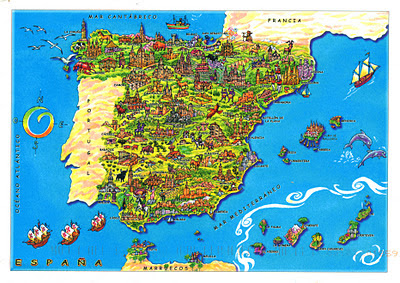 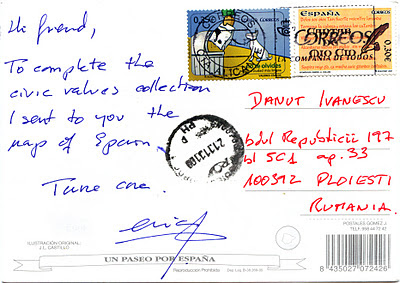 I said here, referring to the set of stamps Civic Values issued by Correos España this year, that "I have now three of the four stamps of the set". My friend Eric noticed this and sent me a postcard that has on back even the stamp which I lacked, Mantén limpia tu ciudad (keep your city clean). Now I have the complete set. Warm thanks, Eric, and you to know that I'll make you also a surprise.

What I like most to this map of Spain is that the carracks still depart from Cadiz, perhaps to the Indies, be they Eastern or Western. Nostalgia? We find on the map the most important cities, represented by a symbolic building, old (León, for example, by Santa Maria de León Cathedral, Sevilla by Torre del Oro, etc) or new (Madrid by Cibeles Palace, Barcelona by Sagrada Familia, etc), medieval windmills and ancient aqueducts, events (The Festival of San Fermín), artistic manifestation (flamenco and palos), wild animals who live in peninsula (the wild boar, the bear, the chamois, the ibex, the eagle, the stork, the lobster…) or domestic (the cow, the horse, the bull of course…) and even wine areas or beaches. I haven't covered the whole range of symbols which appear on the postcard, because it's very extensive. In other words, a map carefully designed and well done.

I wrote about the first stamp in the beginning of the post, but there is also a second, which depicts the first verses of the Cantar de Mio Cid (The Song of the Cid) as written down by a copyist. It was issued with the occasion of the anniversary of 800 years since Pere Abbat has copied this famous medieval epic poem, the work of an unknown author.