0373, 0818, 1535, 3103 HUNGARY (Budapest) - Hungarian Parliament Building - part of Budapest, including the Banks of the Danube, the Buda Castle Quarter and Andrássy Avenue (UNESCO WHS) 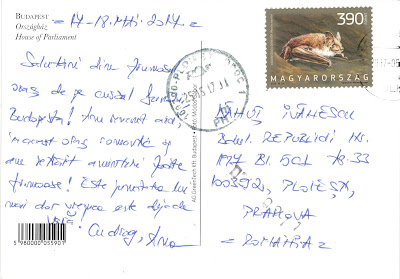 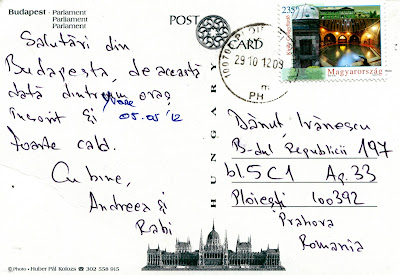 It's about Országház (which literally means "House of the Country"), the Hungarian Parliament Building, located on Lajos Kossuth Square, on the bank of the Danube. Budapest was united from three cities in 1873 and seven years later the Diet resolved to establish a new, representative Parliament Building, expressing the sovereignty of the nation. An international competition was held, and Imre Steindl emerged as the victor. Construction was started in 1885 and the building was inaugurated on the 1000th anniversary of the country in 1896, and completed in 1904. 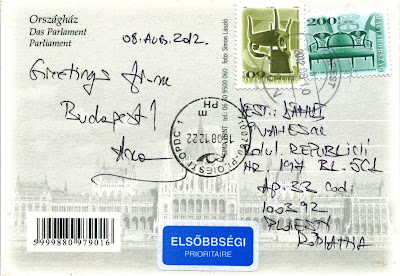 Similar to the Palace of Westminster, it was built in the Gothic Revival style, and it has a symmetrical facade (where are displayed statues of Hungarian rulers, Transylvanian leaders and military commanders) and a central dome in Renaissance Revival style. The main façade overlooks the River Danube, but the official main entrance is from the square on the east side of the building. About 100,000 people were involved in construction, during which 40 million bricks, half a million precious stones and 40 kilograms of gold were used.

In interior are other statues, including those of Árpád, Stephen I and John Hunyadi. The Holy Crown of Hungary, which is also depicted in the coat of arms of Hungary, is also displayed since 2000 in the hexadecagonal (sixteen-sided) central hall, one of the famous parts of the building. Further features include the stained glass and glass mosaics by Miksa Róth. Some of the best views of the Parliament are from the Danube (take a Danube cruise) or from across the river, especially from Batthyány Square, which is only one stop by subway from Kossuth square on the M2 line. 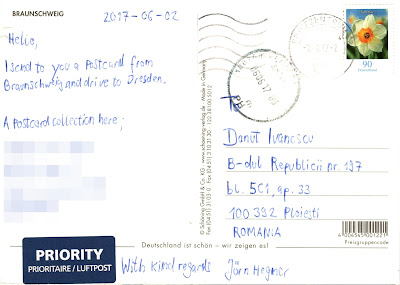 Braunschweig is situated north of the Harz mountains at the furthest navigable point of the Oker river, which connects to the North Sea via the rivers Aller and Weser. A powerful and influential centre of commerce in medieval Germany, it was a member of the Hanseatic League from the 13th until the 17th century, and the capital city of three successive states: the Principality of Brunswick-Wolfenbüttel (1269-1432, 1754-1807 and 1813-1814), the Duchy of Brunswick (1814-1918) and the Free State of Brunswick (1918-1946). 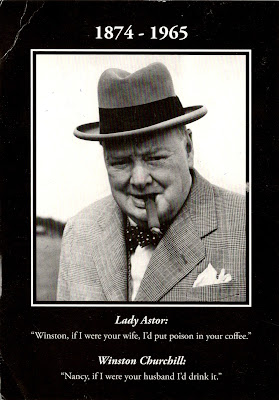 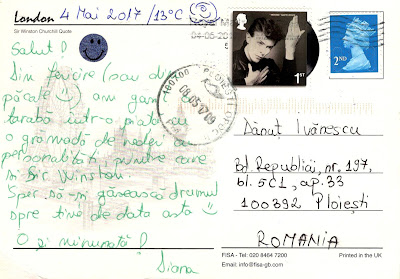 Sir Winston Leonard Spencer-Churchill, (30 November 1874 - 24 January 1965) was a British politician who served as the Prime Minister of the United Kingdom from 1940 to 1945 and again from 1951 to 1955. He led Britain to victory over Nazi Germany during WWII. Churchill was also a non-academic historian and a writer, winning the Nobel Prize in Literature in 1953. Named the Greatest Briton of all time in a 2002 poll, Churchill is among the most influential people in British history. 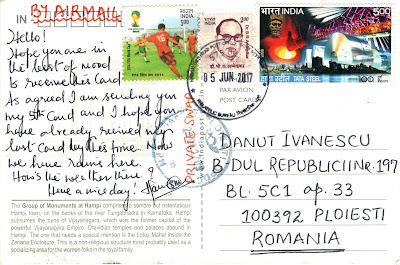 Posted on 02.01.2012, 27.06.2017
"…as large as Rome and very beautiful to the sight. There are many canals that bring water right into Vijayanagara, and in places there are lakes. The palace of the king, which is larger than the castle at Lisbon, is close to a palm grove and other richly bearing fruit trees. Below the Moorish quarter there is river… and along its banks fruit trees growing so closely together that they look like a thick forest", wrote the Portuguese traveller Domingo Paes around 1520, when he visited Vijayanagara (City of Victory), the capital of the empire with the same name, the last bastion of Hinduism in India. 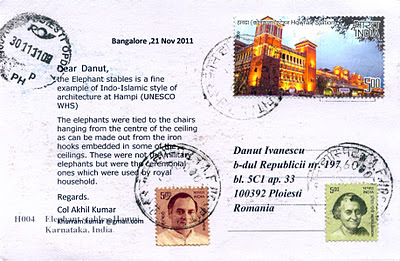 The empire has reached its peak during the reign of Krishnadevaraya (1509-1529), when were erected the impressive temples and elephant stables still standing today at the village of Hampi. Even if they don't agree as to the origin of the empire, historians agree the founders were inspired by Vidyaranya, a saint at the Sringeri monastery to fight the Muslim invasion. After more then 200 years, the killing of emperor Aliya Rama Raya in 1565 at the battle of Talikota, against an alliance of the Deccan sultanates, mark the end of the city. The Sultanate's army plundered Vijayanagara and reduced it to the ruins; it was never re-occupied. 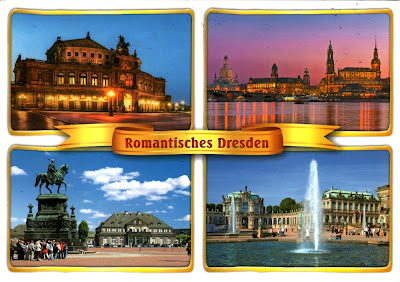 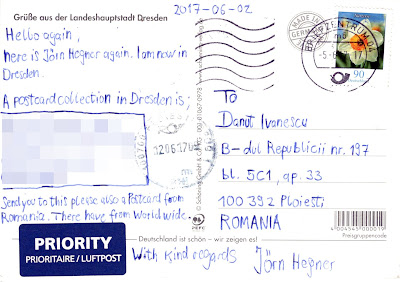 Situated in a valley on the River Elbe, near the border with the Czech Republic, Dresden is the capital city and, after Leipzig, the second-largest city of the Free State of Saxony in Germany. Although it is a relatively recent city of Germanic origin followed by settlement of Slavic people, it has a long history as the capital and royal residence for the Electors and Kings of Saxony, who for centuries furnished the city with cultural and artistic splendour. The city was known as the Jewel Box, because of its baroque and rococo city centre. 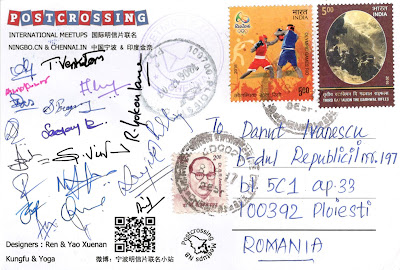 Posted on 12..06.2017, 26.06.2017
On May 7th, 2017 took place this meetup, actually two meetups which holded in same day, at the same hour (China is 3 hours earlier than India) in Chennai (India) and Ningbo (China). Chennai (formerly known as Madras) is the capital of the Indian state of Tamil Nadu, and one of the biggest cultural, economic and educational centres in South India. Ningbo is a sub-provincial city in northeast Zhejiang province in China, with a port which is among the busiest in the world. 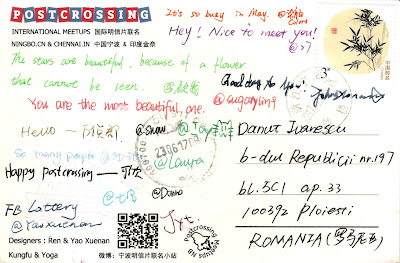 With this occasion, the postcrossers from the two countries issued a special postcard, one alone, on which are joined yoga postures and kung fu stances. Yoga is a group of physical, mental, and spiritual practices or disciplines which originated in ancient India, and has as ultimate goal moksha (liberation). Kung fu is an umbrella term for the Chinese martial arts, several hundred fighting styles that have developed over the centuries in China. 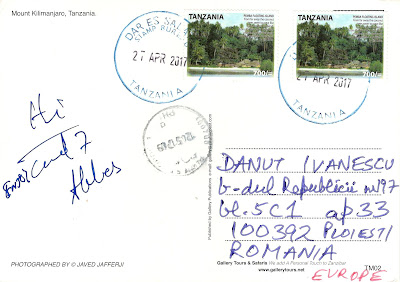 Posted on 31.10.2016, 24.06.2017
Kilimanjaro National Park protects the largest free standing volcanic mass in the world and the highest mountain in Africa, rising 4877m above surrounding plains to 5895m at its peak. With its snow-capped peak, the Kilimanjaro is a superlative natural phenomenon, standing in isolation above the surrounding plains overlooking the savannah. It is composed of three volcanic cones: Kibo (5895m), Mawenzi (5,149m), and Shira (4,005m). Mawenzi and Shira are extinct, while Kibo is dormant and could erupt again.

The mountain has five main vegetation zones from the lowest to the highest point:  Lower slopes, montane forest, heath and moorland, alpine desert and summit. The whole mountain including the montane forest belt is very rich in species, in particular mammals, many of them endangered species. The mountain is drained by a network of rivers and streams, especially on the wetter and more heavily eroded southern side and especially above 1,200m. Below that altitude, increased evaporation and human water usage reduces the waterflows. 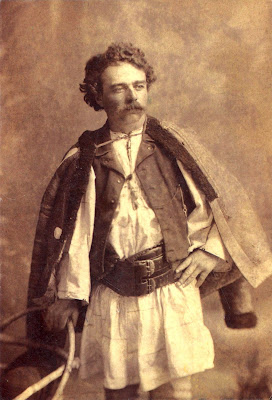 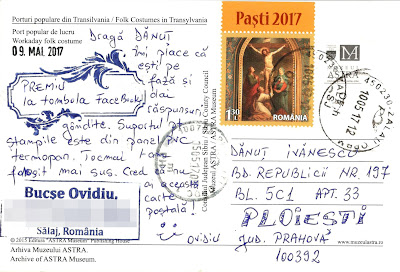 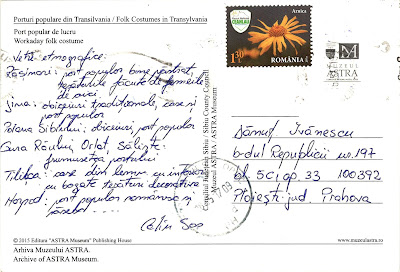 The structure of Romanian traditional clothing has remained unchanged throughout history and can be traced back to the earliest times. It finds its roots in the part of Dacians and Getae ancestors, and resembles with that of the peoples of the Balkan Peninsula. The first testimonies about it are set in stone, on Tropaeum Traiani monument in Adamclisi and Trajan's Column in Rome, and its first representations date from the 14th century, in Chronicon Pictum Vindobonense, and in Codex Latinus Parisinus.

Posted on 29.02.2016, 08.05.2016, 14.09.2016, 24.05.2017, 19.06.2017
Luang Prabang (literally: "Royal Buddha Image") is located in northern Laos, at the confluence of the rivers Nam Khan and Mekong. Actually, the main part of the city consists of four main roads on a peninsula between the two rivers. Mountain ranges (in particular the PhouThao and PhouNang mountains) encircle the city in lush greenery. It was formerly the capital of a kingdom of the same name, and also the royal capital and seat of government of the Kingdom of Laos, until the communist takeover in 1975.

The city is an outstanding example of the fusion of traditional architecture and Lao urban structures with those built by the European colonial authorities in the 19th and 20th centuries. Its unique, well-preserved townscape illustrates a key stage in the blending of these two cultural traditions. The richness of its architecture reflects the mix of styles and materials. The majority of the buildings are wooden structures. Only the temples are in stone, whereas one- or two-storey brick houses characterize the colonial element.

That Pathoun (Stupa of the Great Lotus), also known as That Mak Mo (Watermelon Stupa) due to its similarities to the fruit, lies within the walls of Wat Visounnarath, the oldest temple in Luang Prabang, erected in 1513 and rebuilt in 1898. Built between 1559 and 1560 by the Lao King Setthathirath, Wat Xieng Thong is one of the most important of Lao monasteries and remains a significant monument to the spirit of religion, royalty and traditional art. 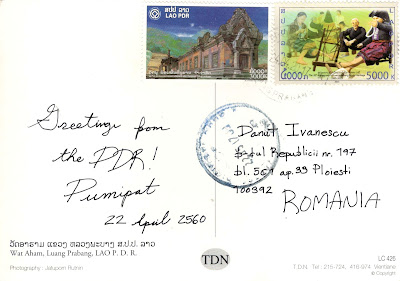 There are over twenty structures on the grounds including a sim, shrines, pavilions and residences, in addition to its gardens. The building of the wat have carved gilded wooden doors depicting scenes from Buddha's life. In the sim the ceiling displays Dharmachakras - dharma wheels symbolising Buddhist law and the circle of reincarnation. The outer walls of the sim depict Lao legends and the rear gable is decorated with a glass mosaic depicting the tree of life. The outer walls of the Sanctuary of the Reclining Buddha, also known as Red Chapel, are decorated with mosaics. 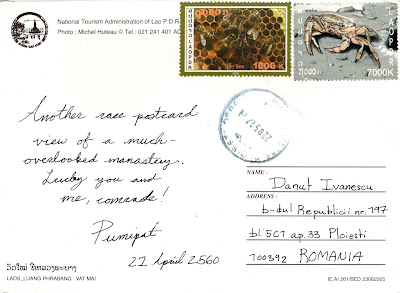 The Royal Palace (Haw Kham) was built in 1904 during the French colonial era for King Sisavang Vong and his family. After the death of the king, the Crown Prince Savang Vatthana and his family were the last to occupy the grounds. In 1975, the monarchy was overthrown by the communists and the Royal Family were taken to re-education camps. The palace was then converted into a national museum. The architecture of the building has a mixed of traditional Lao motifs and French Beaux Arts styles. 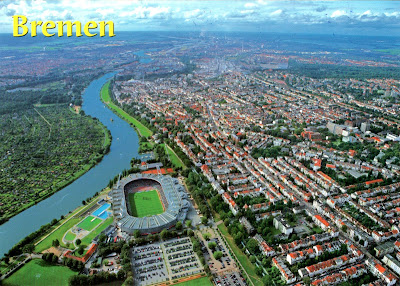 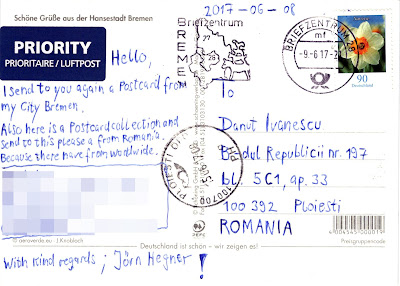 The city of Bremen lies on both sides of the river, about 60km upstream of its estuary on the North Sea and its transition to the Outer Weser by Bremerhaven. Opposite Bremen's Altstadt (Old Town) is the point where the Middle Weser becomes the Lower Weser and, from the area of Bremen's port, the river has been made navigable to ocean-going vessels. The region on the left bank of the Lower Weser, through which the Ochtum flows, is the Weser Marshes, the landscape on its right bank is part of the Elbe-Weser Triangle. 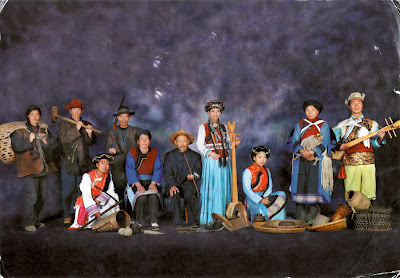 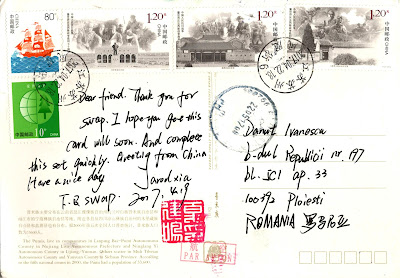 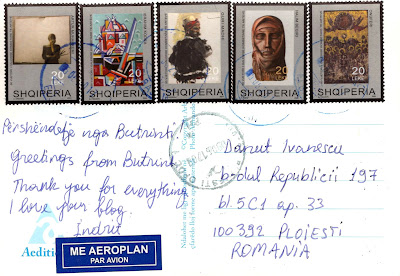 Located in south Albania, in Epirus, close to the Greek border, Butrint constitutes a very rare combination of archaeology and nature, being a microcosm of Mediterranean history, with occupation dating from 50 000 BC, at its earliest evidence, up to the 19th century AD. Prehistoric sites have been identified within the nucleus of Butrint, the small hill surrounded by the waters of Lake Butrint and Vivari Channel, as well as in its wider territory. 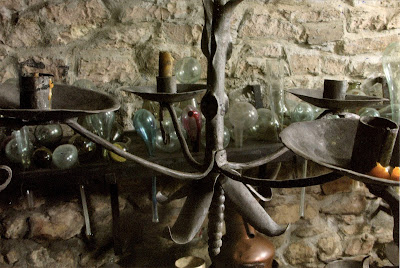 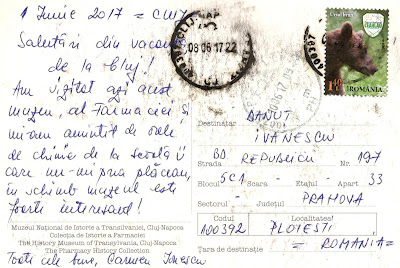 The National Museum of Transylvanian History is a history and archaeology museum in Cluj-Napoca, and features a permanent exhibition, as well as temporary exhibitions, and Pharmacy History Collection (rom) - this last opened in the Hintz House, the building of the first pharmacy in the city (16th century), documented since 1573. At the origin of the collection is a collection of the professor Iuliu Orient (1869-1940), which includes various Transylvanian pharmaceutical objects, exhibited since in 1904. 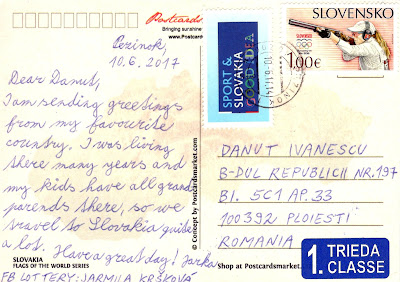 Posted on 03.03.2012, 18.06.2017
Slovakia is a landlocked country in Central Europe, bordered by the Czech Republic, Austria, Poland, Ukraine and Hungary. Its population is over 5 million and comprises mostly ethnic Slovaks. The capital and largest city is Bratislava, which occupies both banks of the River Danube and the left bank of the River Morava. The Slovak landscape is noted primarily for its mountainous nature, with the Carpathian Mountains extending across most of the northern half of the country. The largest lowland is the fertile Danubian Lowland in the southwest, followed by the Eastern Slovak Lowland in the southeast. 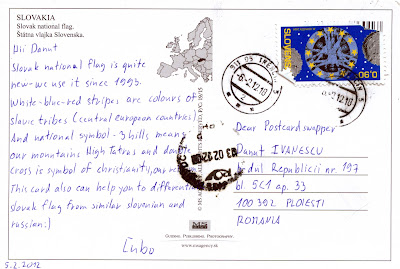 Even though the Slavic tribes have settled in the territory of present-day Slovakia in the 5th century, a state only of the Slovaks there only from 1993, after the peaceful dissolution of Czechoslovakia (if we don't take into consideration the puppet state dependent of Nazi Germany, that existed from 1939 to 1945). In the rest of history, various parts of today's Slovakia belonged to Samo's Empire, Principality of Nitra, Great Moravia, Kingdom of Hungary, the Austro-Hungarian Empire or Habsburg Empire, and Czechoslovakia.