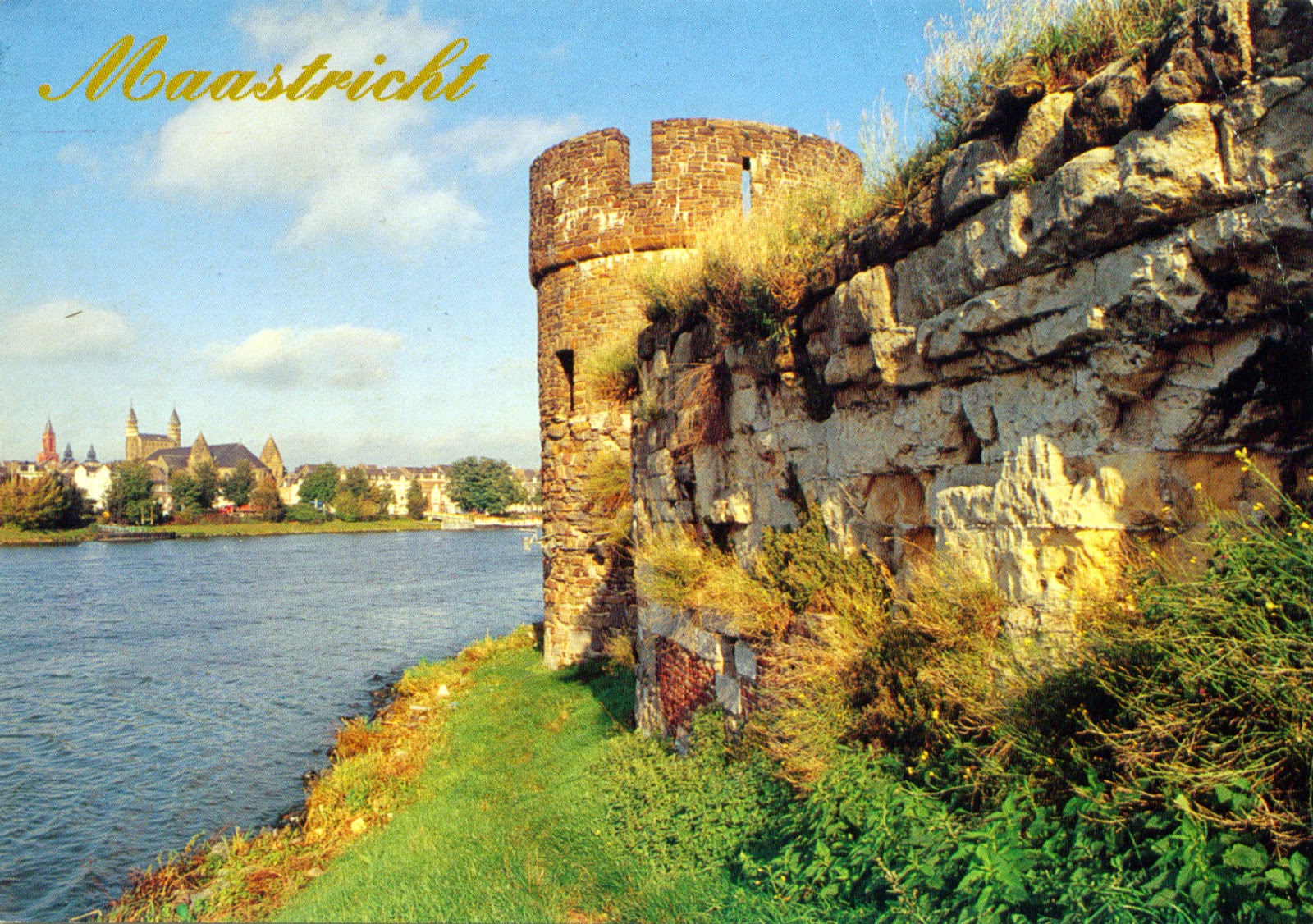 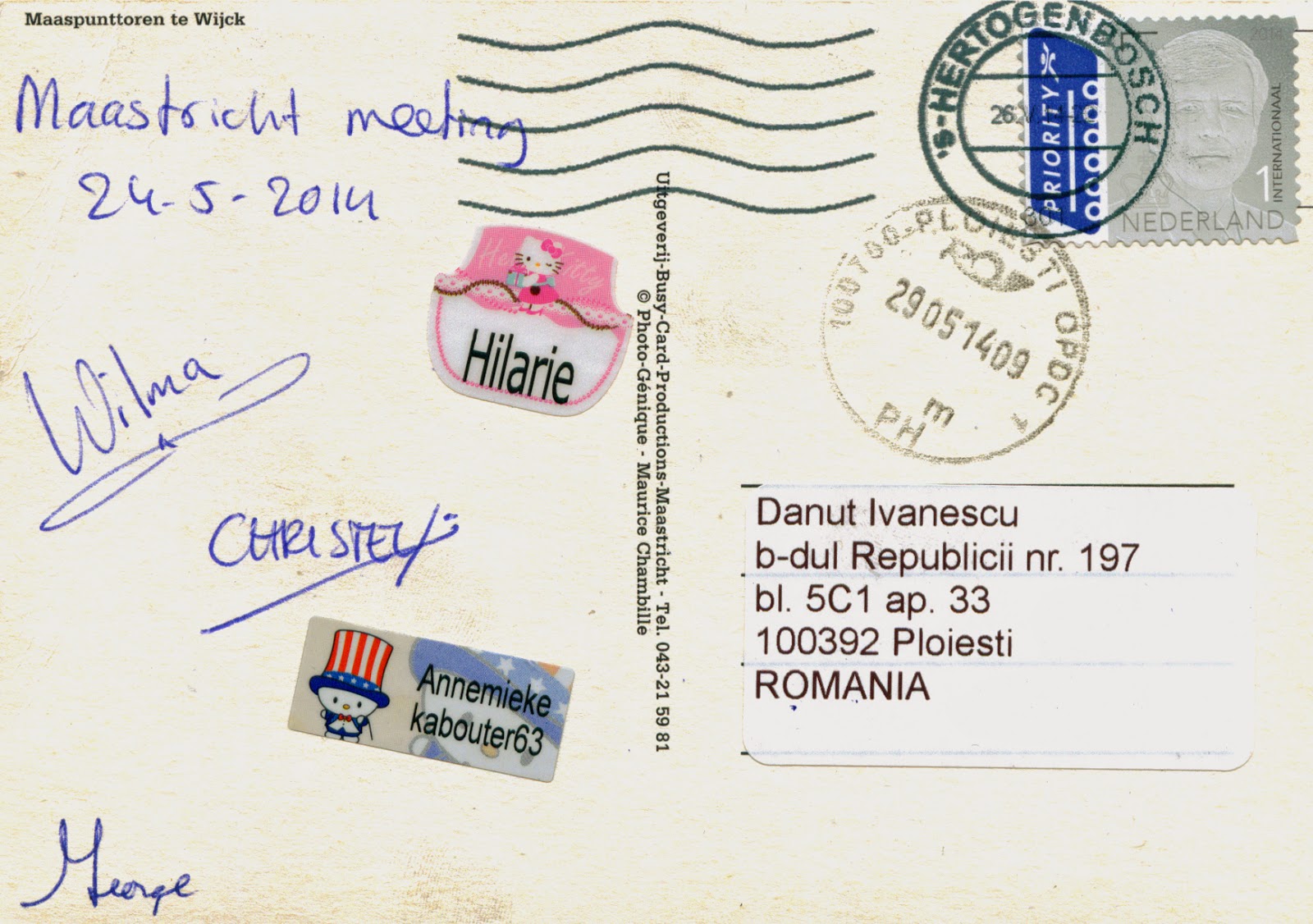 Located on both sides of the Meuse river, at the point where the Jeker River joins it, Maastricht has become known in nowadays by way of the Maastricht Treaty, as the birthplace of the European Union, European citizenship, and the single European currency, the euro. It developed from a Belgic settlement, that in the Gallic Wars was conquered by the Romans. As part of the heartland of the Carolingian Empire, the city was an early Christian diocese until it lost this position to nearby Liège in the early 8th century. It received city rights in 1204, and throughout the Middle Ages it remained a centre for trade and manufacturing of wool and leather, but gradually economic decline set in. After a period of prosperity in the 15th century, its economy suffered during the wars of religion, and recovery didn't happen until the industrial revolution in the early 19th century. Because its geographical and cultural proximity to Belgium, integration of Maastricht into the Netherlands didn't come about easily, retaining a distinctly non-Dutch appearance during much of the 19th century. 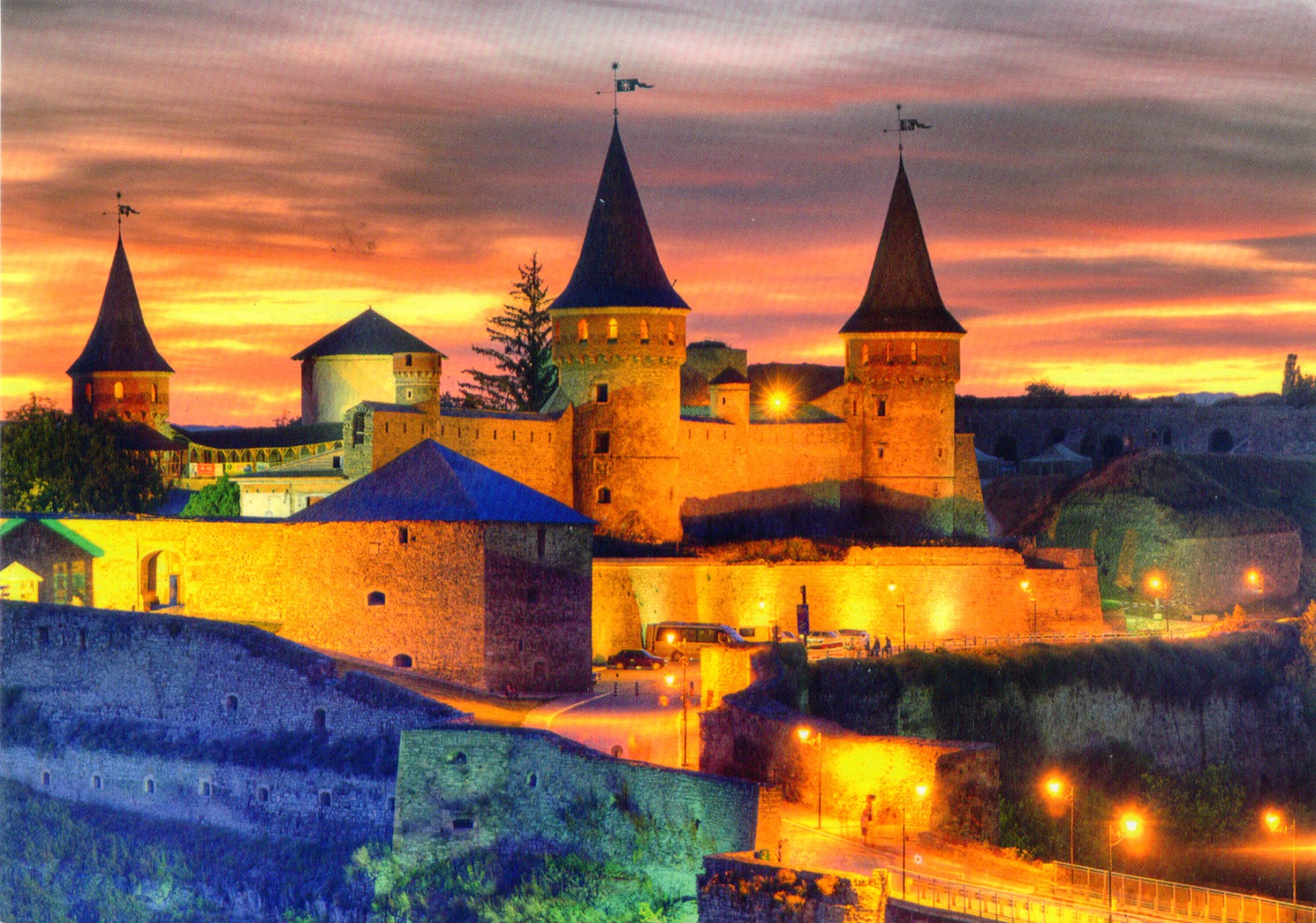 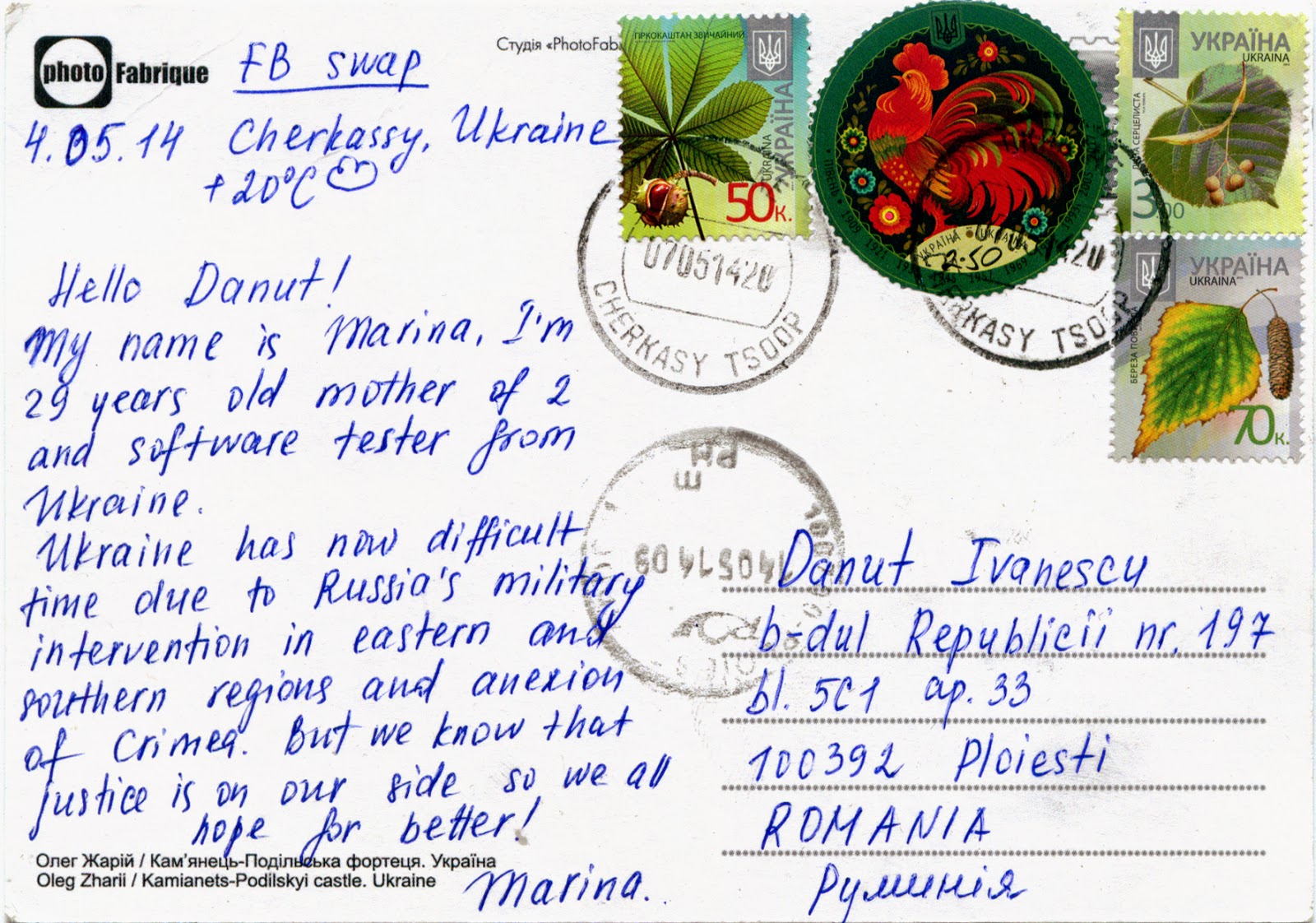 Located on the Smotrych River, near to its flow into the Dniester, Kamyanets-Podilsky is one of the oldest cities in Ukraine, for many centuries a major cultural centre of Podolia. It was first mentioned in 1062 as a Slavic town controlled by Lithuanians, but evidence suggests that was founded a thousand years before by the Dacians, under the name Petridava or Klepidava. In 1241 it was destroyed by the Mongols, and in 1352 was annexed by the Polish King Casimir III. 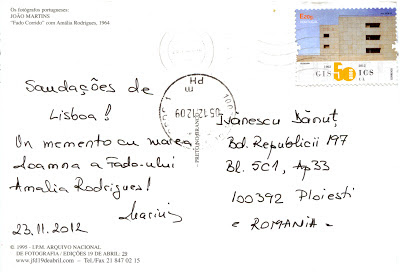 Posted on 17.01 2013 and 24.05.2014
The Portuguese word fado comes from the Latin fatum (fate, in English). How can sound and what lyrical themes can tackle a musical genre that is called so? In Portuguese popular belief, fado is characterized by mournful tunes and lyrics, often about the sea or the life of the poor, and infused with a sentiment of resignation, fatefulness and melancholia, linked to the word saudade (a permanent, irreparable loss and its consequent life lasting damage). 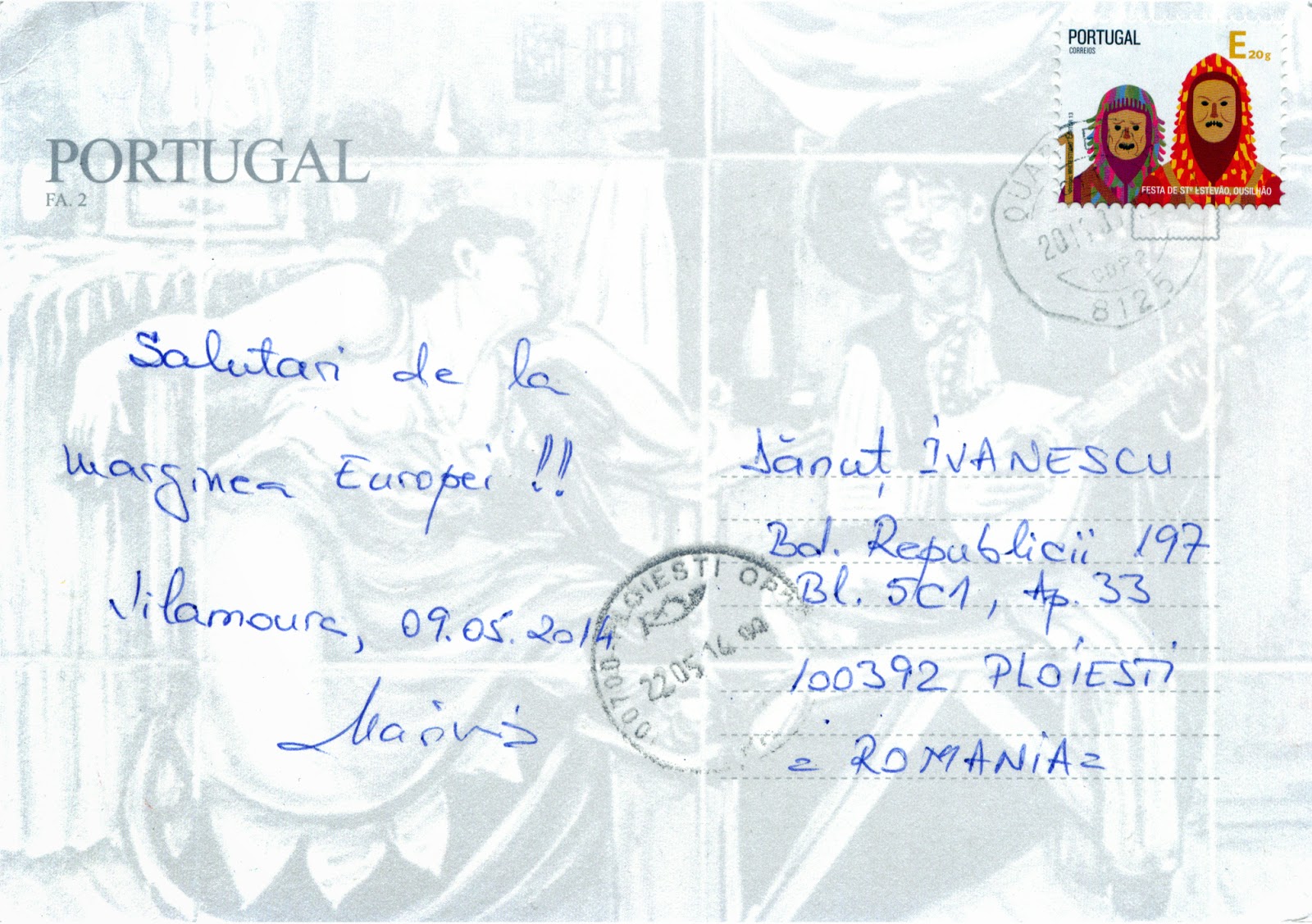 The fado's history can be traced to the 1820s, but probably it had much earlier origins. It was generally sung by one person, accompanied by the portuguese guitar and the classical guitar, but today the the fadista may be accompanied by a string quartet or a full orchestra. There are two main varieties of fado, namely those of the cities of Lisbon (a more popular style) and Coimbra (a more classic style). According to tradition, to applaud fado in Lisbon you clap your hands, while in Coimbra one coughs as if clearing one's throat. In 2011, UNESCO inscribed Fado, urban popular song of Portugal on the Representative List of the Intangible Cultural Heritage of Humanity. 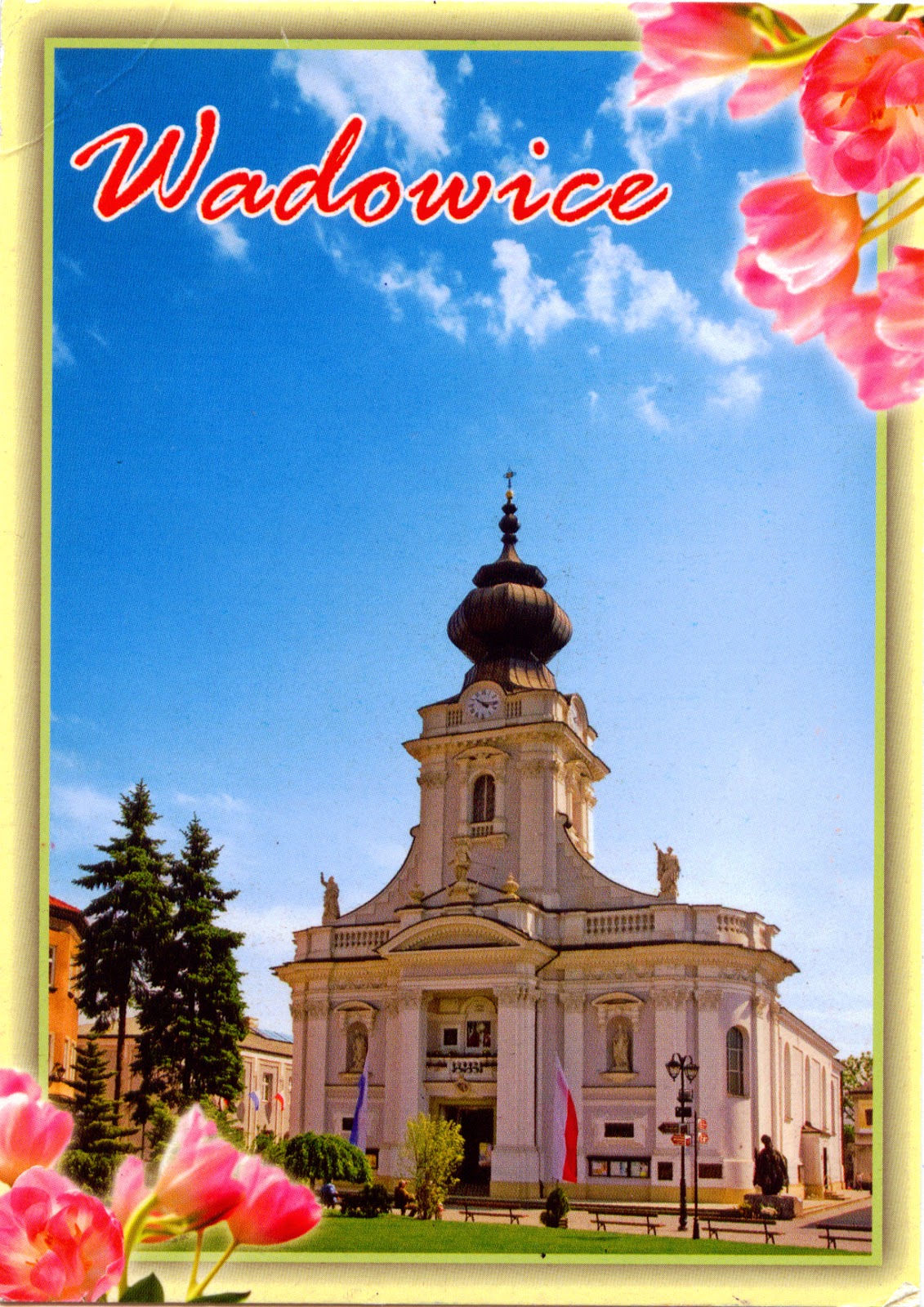 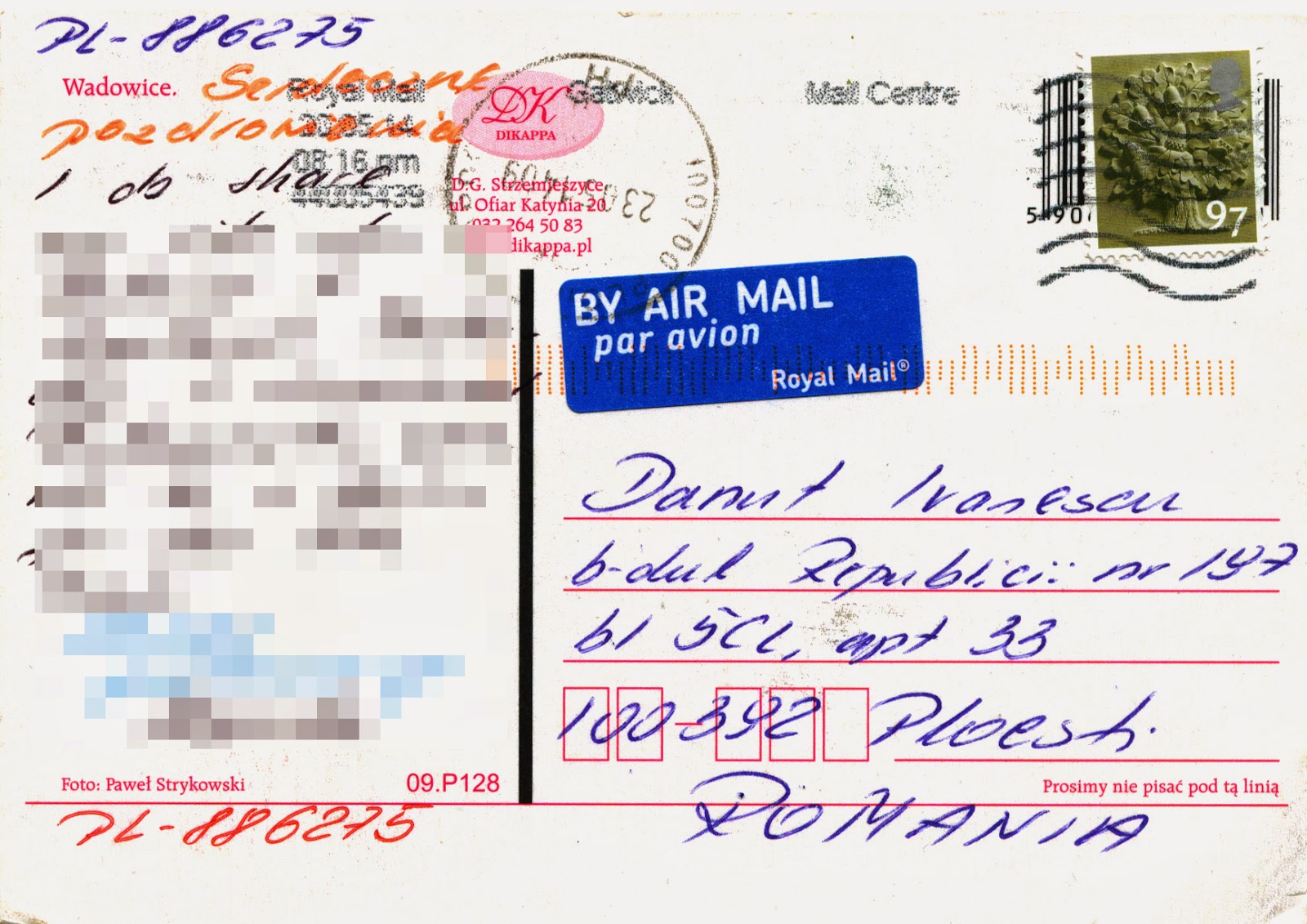 Known as being the birthplace of Pope John Paul II, Wadowice is located at 50km from Kraków, on the Skawa river, confluence of Vistula, in the eastern part of Silesian Foothills. According to a legend, the town was founded by certain Wad or Wład, a short form for Ladislaus, and the first permanent settlement in the area was founded in late 10th century or early 11th century. In 1430 a great fire destroyed the town, but was soon rebuilt and granted city rights. Incorporated into the Kraków Voivodeship in 1564, it became a regional centre of crafts and trade in the 16th-17th centuries. After the 1st Partition of Poland, it was annexed by Austria, and after the WWI , it became part of the newly-reborn Poland. 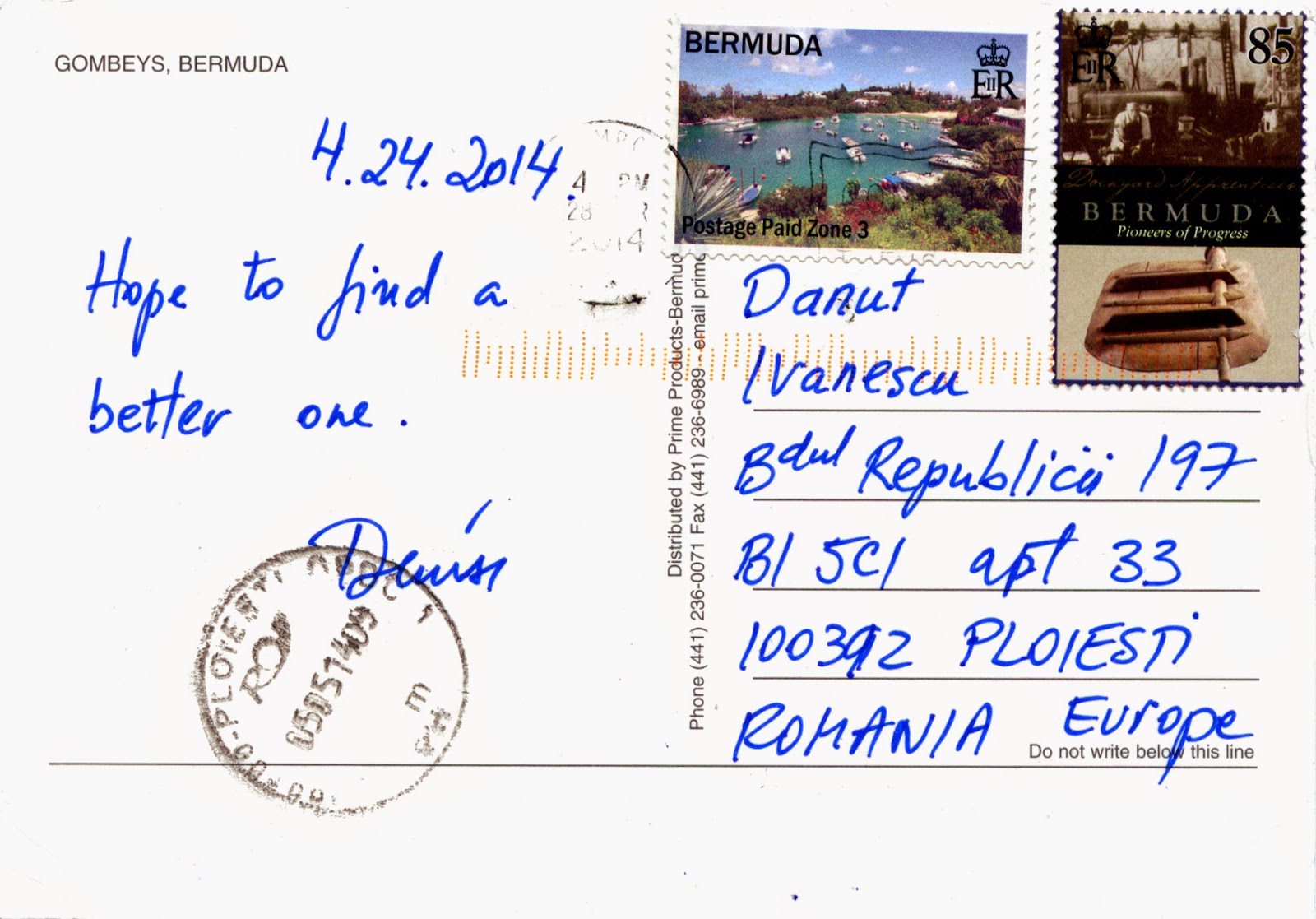 The Gombey is an iconic symbol of Bermuda, this folklife tradition reflecting the island’s blend of African, indigenous peoples, Caribbean and British cultures, incorporating them over time into a unique performance art full of colorful and intricate masquerade, dance and drumming. The word "Gombey" is related to the Bahamian "Goombay", a similar dance tradition. It also refers to a specific drum of African origin. Dancers are usually male, and perform in groups of 10-30 though in modern times female groups have emerged. The traditions have been passed down orally from one generation to the next within families and the Captains of each troupe determine the direction of the troupe and style that is taught. 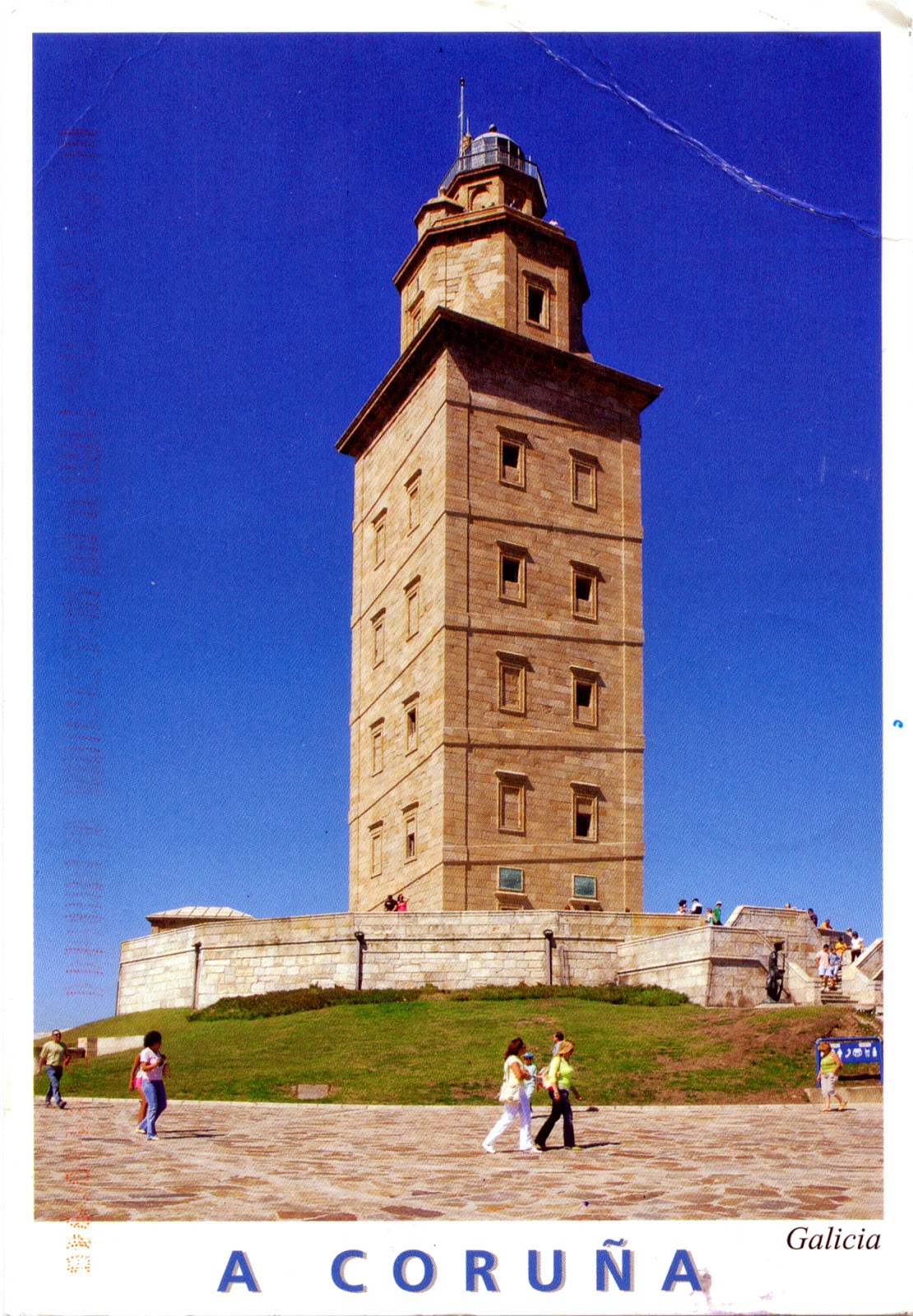 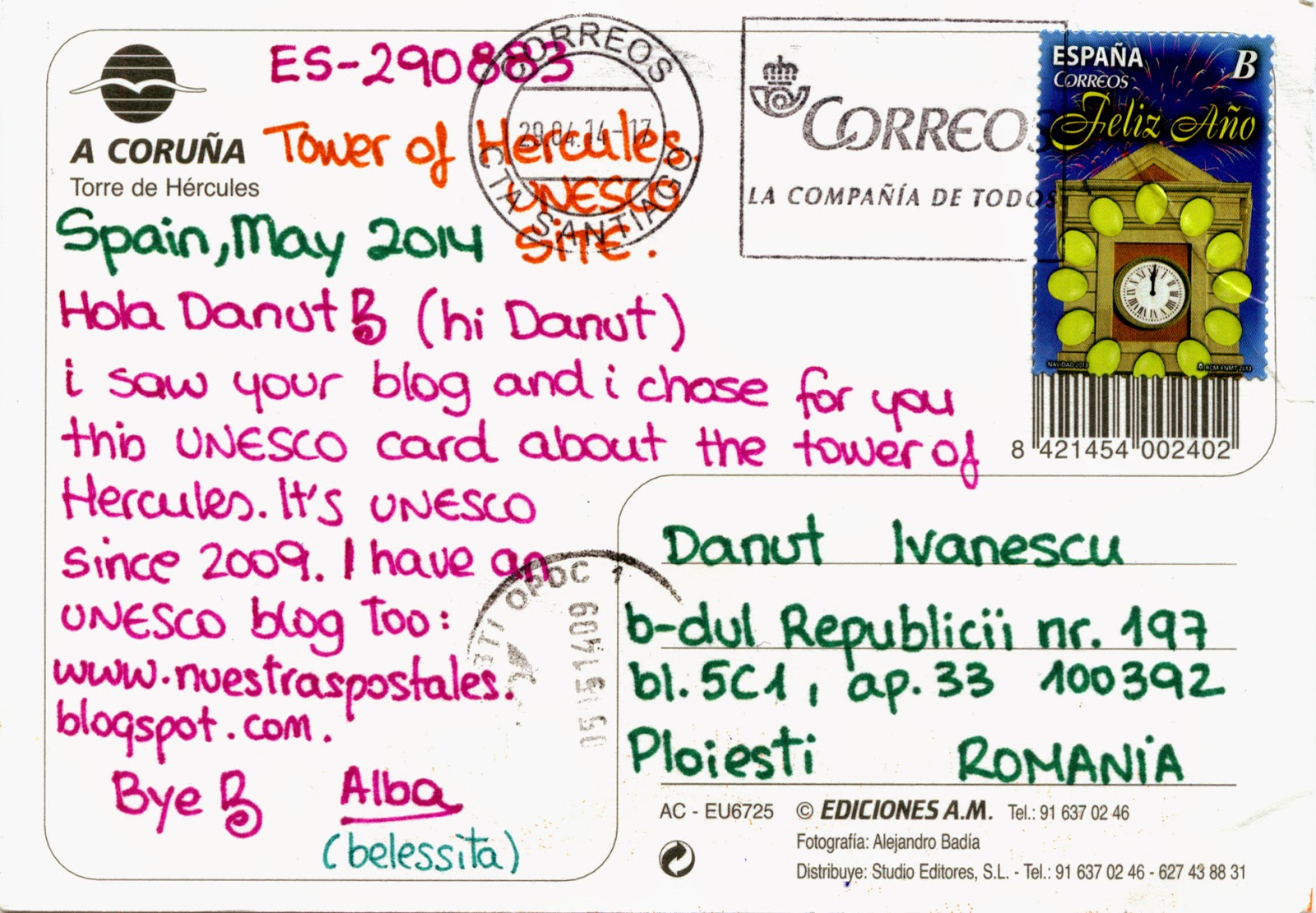 Located on a promontory in the entrance of an estuary in a large gulf (the Portus Magnus Artabrorum of the classical geographers) on the Atlantic Ocean, A Coruña served as political capital of the Kingdom of Galicia from the 16th to the 19th centuries, and as a regional administrative centre between 1833 and 1982, before being replaced by Santiago de Compostela. The city is the site of the Roman Tower of Hercules, a lighthouse which has been in continuous operation since possibly the 2nd century AD. 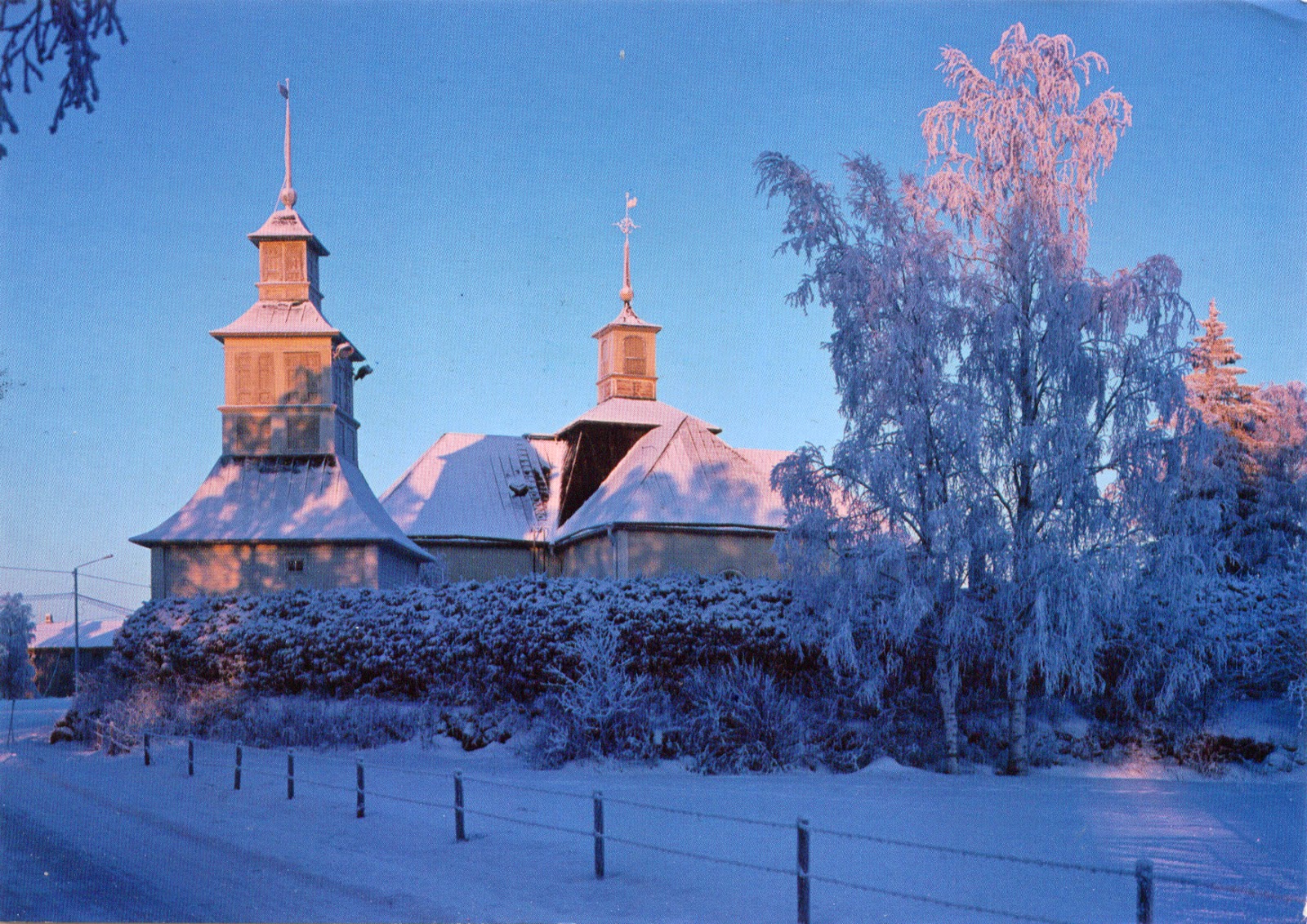 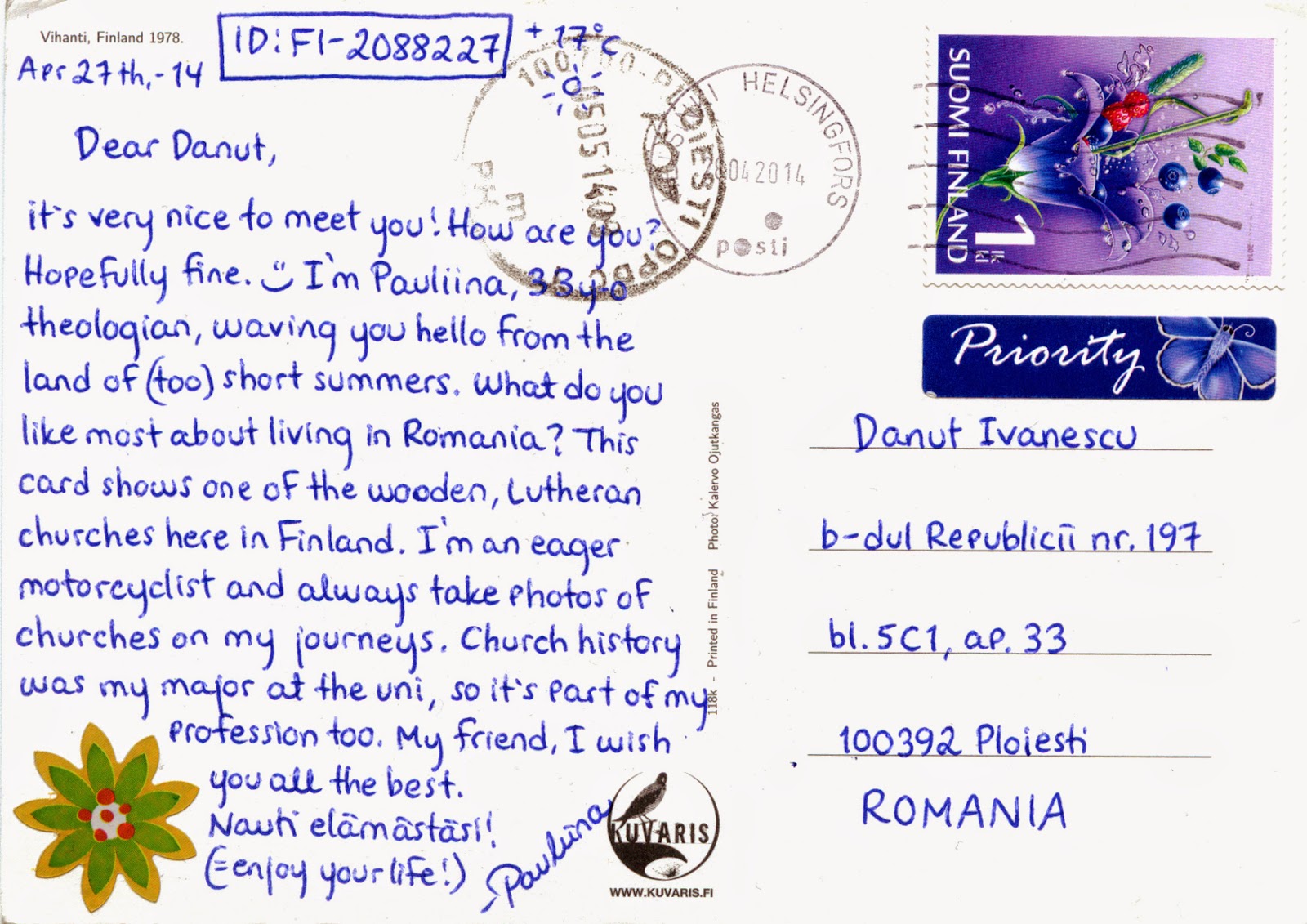 Located in the centre of Finland, Vihanti is a little town, which has only 3000 inhabitants, even after the assimilation of the neighbor city of Raahe in 2013. The wooden church in the postcard was built during the reign of Gustav III of Sweden, and was named after the wife of the king, Sophia Magdalena. Its building was decided in 1871, after an inspection which found that the old church, built in 1691, couldn't be extended. The plans was made by Simon Silvén, and the church was completed in June 1784. The bell tower of the old church has been preserved and it is one built in 1752. The interior was decorated by Emanuel Granberg and Erik Westzynthius, and the altarpiece was painted directly to the log wall. 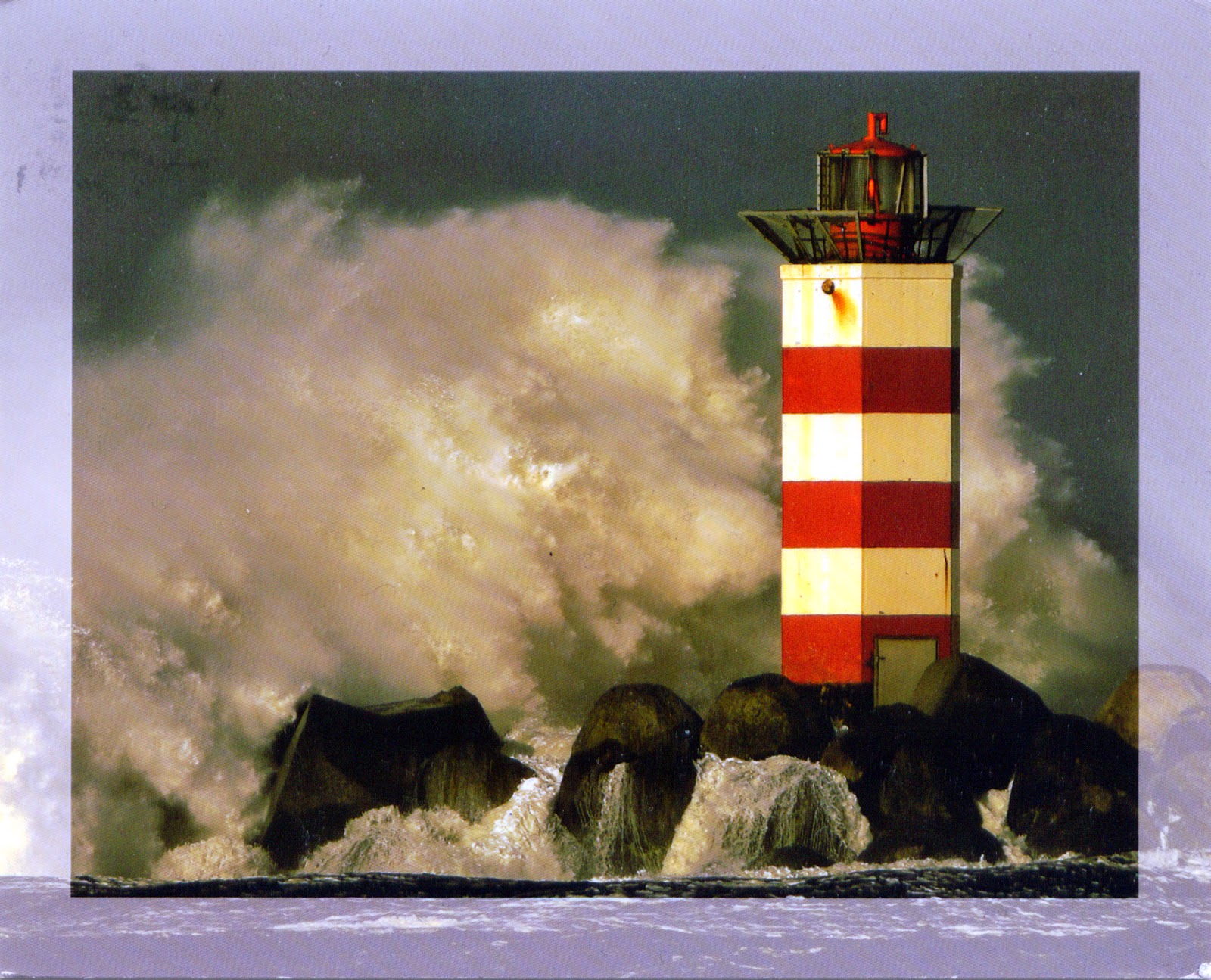 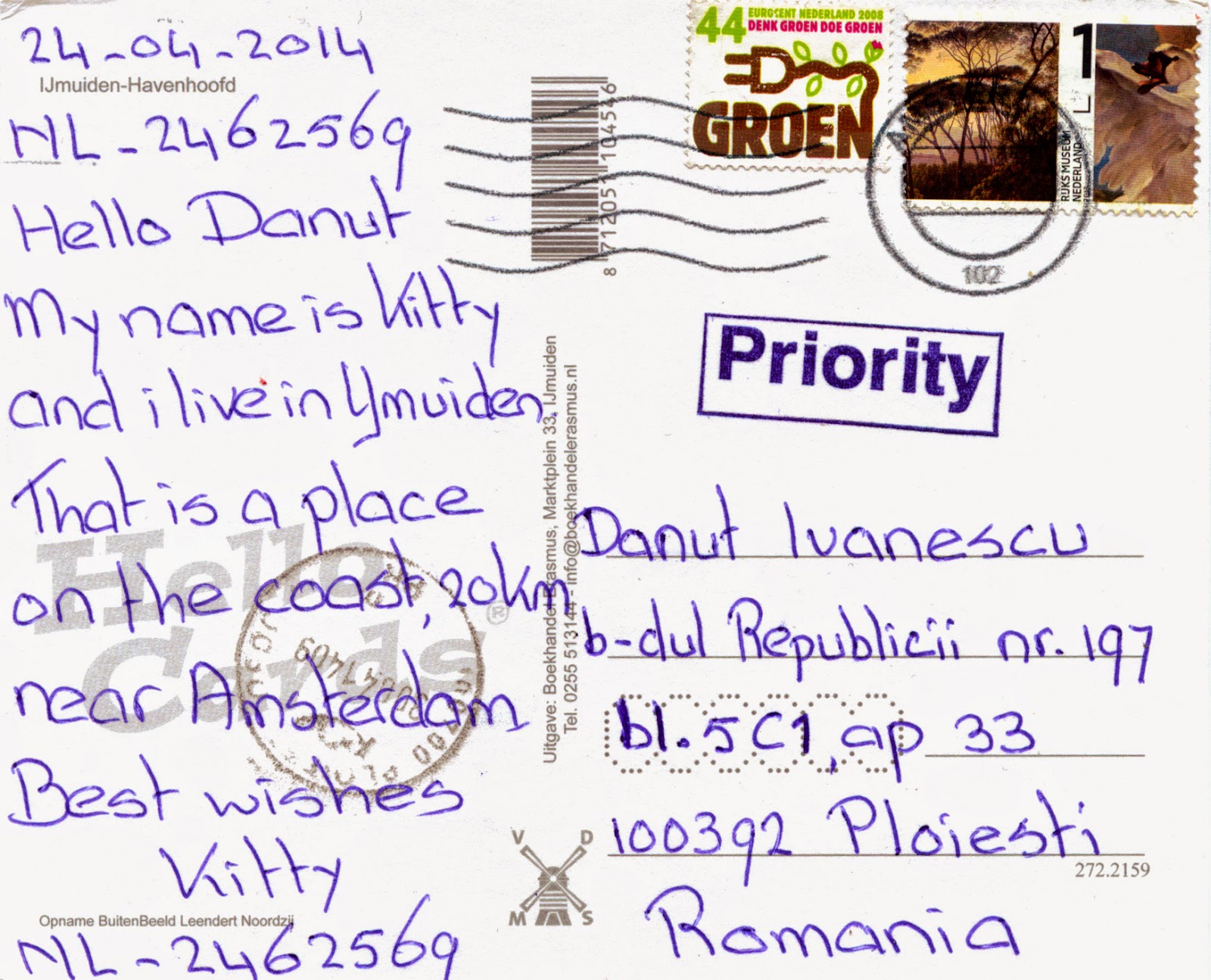 Located at the mouth of the North Sea Canal to Amsterdam, approximately 17km north of Haarlem, IJmuiden (mouth of the IJ) is an important port city, its port being the third of the Netherlands. Before the building of present IJmuiden, the area (known as Breesaap) was a desolate plain, where only a handful of farmers strove to make a living. Plans to connect Amsterdam with a canal to the North Sea, with its mouth in this area, had been drawn up since 1626, but were only set into motion in the 19th century. So IJmuiden is the newest city in North Holland, and only came into existence on November 1, 1876, when the North Sea Canal was officially opened by William III of the Netherlands. Of course that on the pier are several lighthouses, among which the one in the postcard, located on the north side. Build on 1970s from concrete, it has 40m height, and is visible for 10 nautical miles. 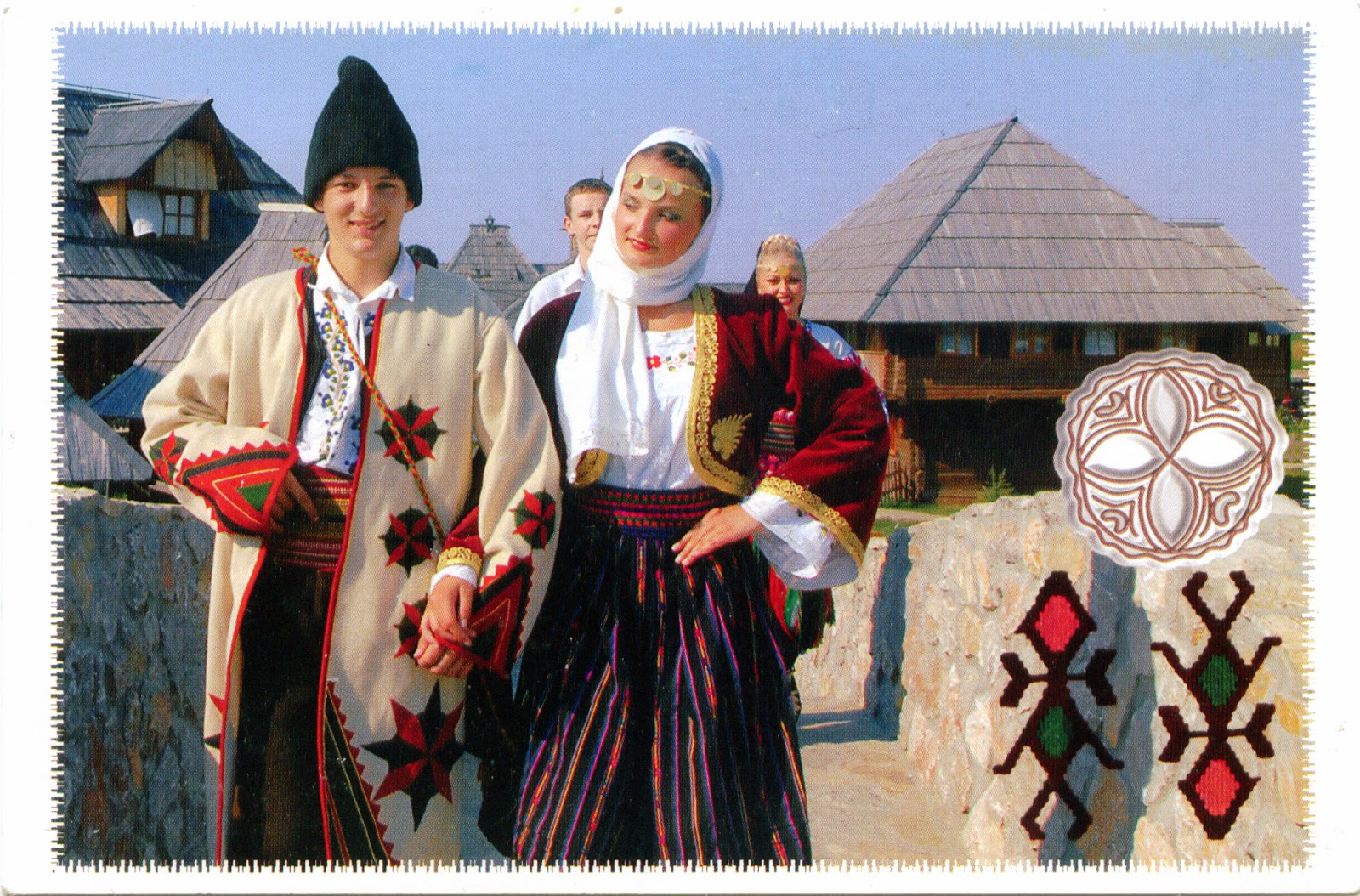 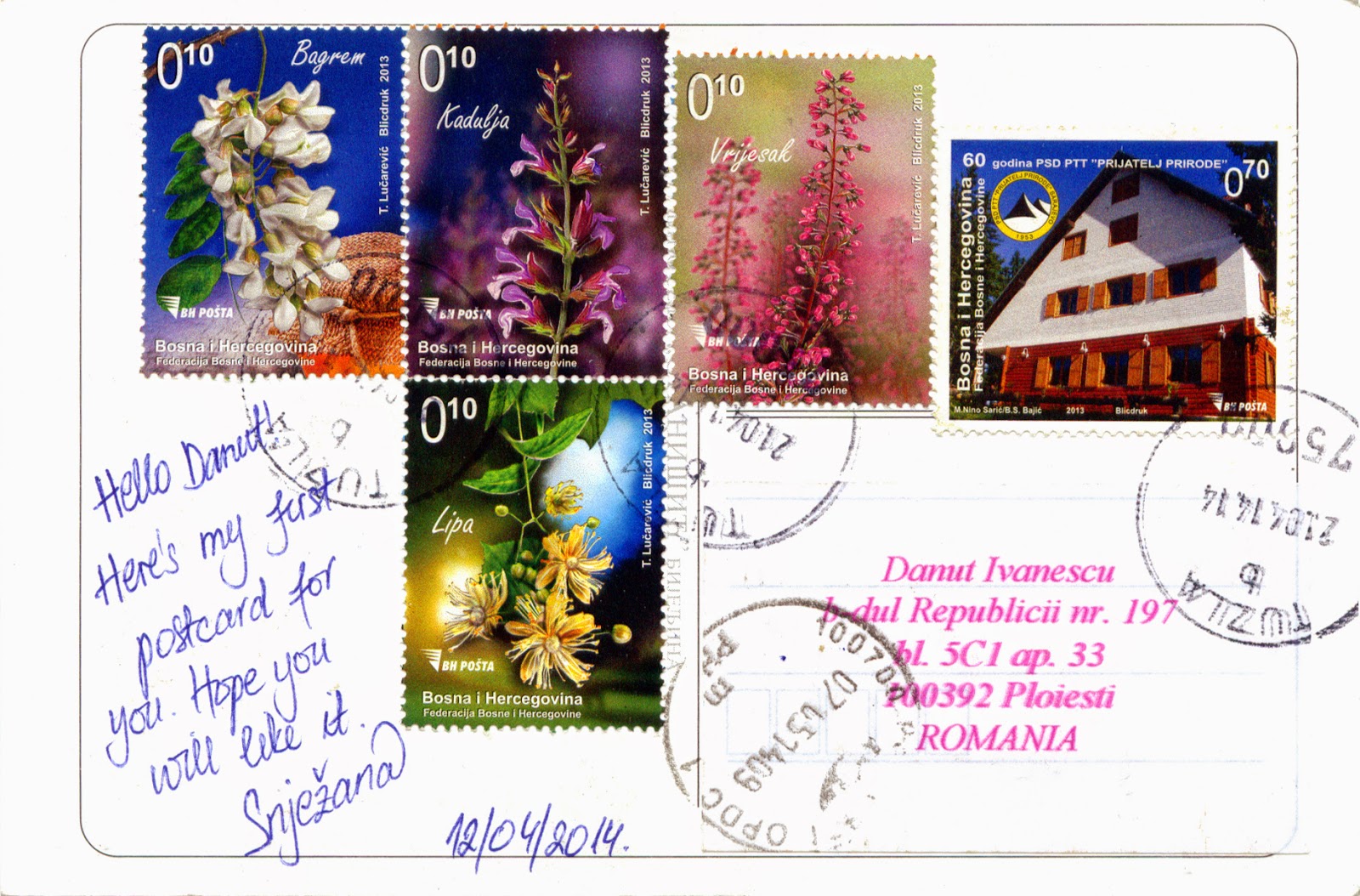 Bosnia and Herzegovina is home to three ethnic "constituent peoples", Bosniaks, Serbs and Croats, all three explicitly mentioned in the constitution, none of them being considered a minority or immigrant. The costumes of Bosnian Serbs are divided into two groups, the Dinaric and Pannonian styles. The basic element of both women's and men's dress was a hemp or linen shirt in the form of a tunic with sleeves, abundantly decorated with embroidery done in yarn. The Jelek is a Waistcoat made from wool or velvet while women's jackets are lined with fur. The peony embroidery design often found on aprons, socks and elsewhere is colored bright red, symbolising the blood lost at the Battle of Kosovo. 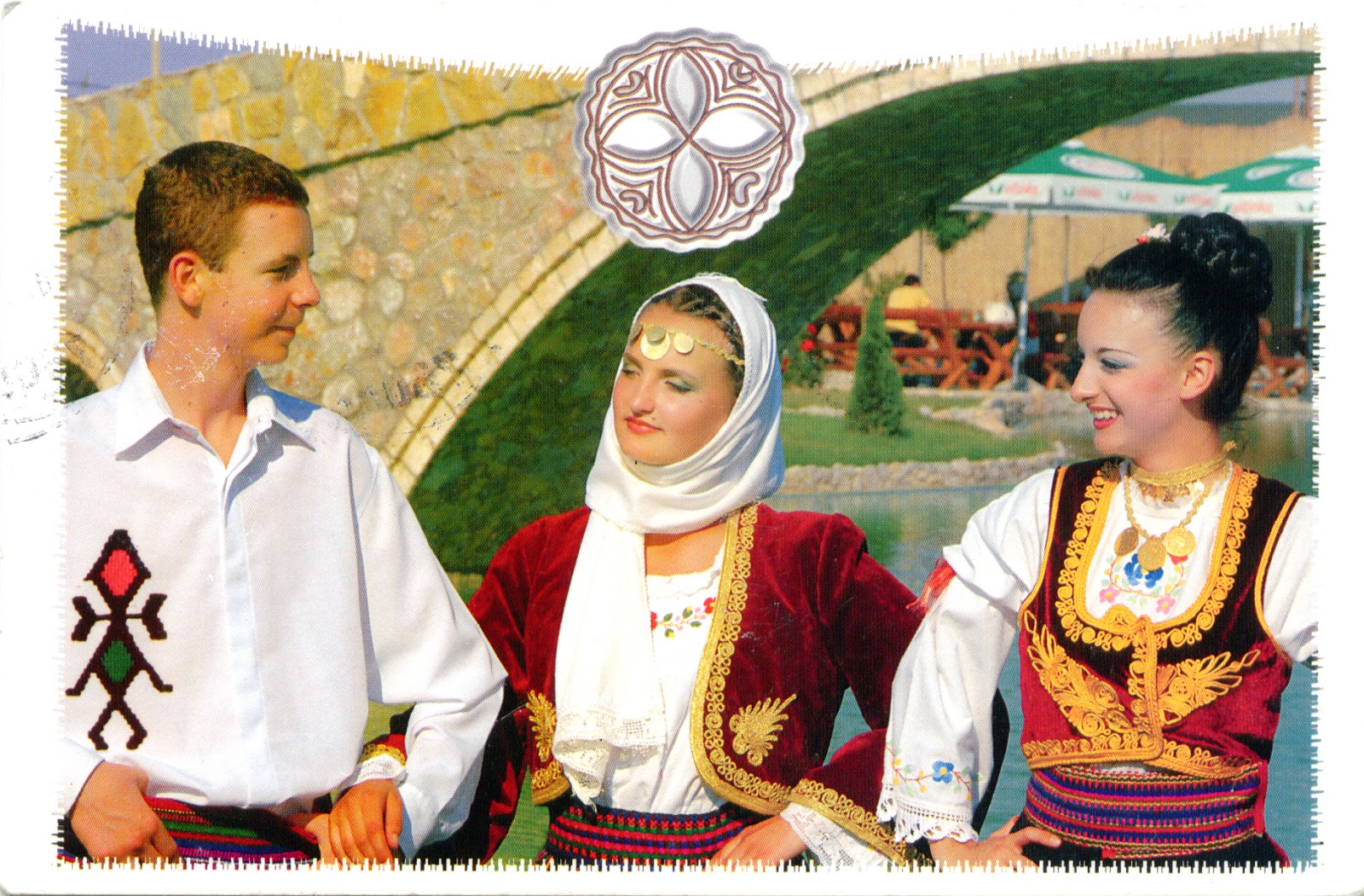 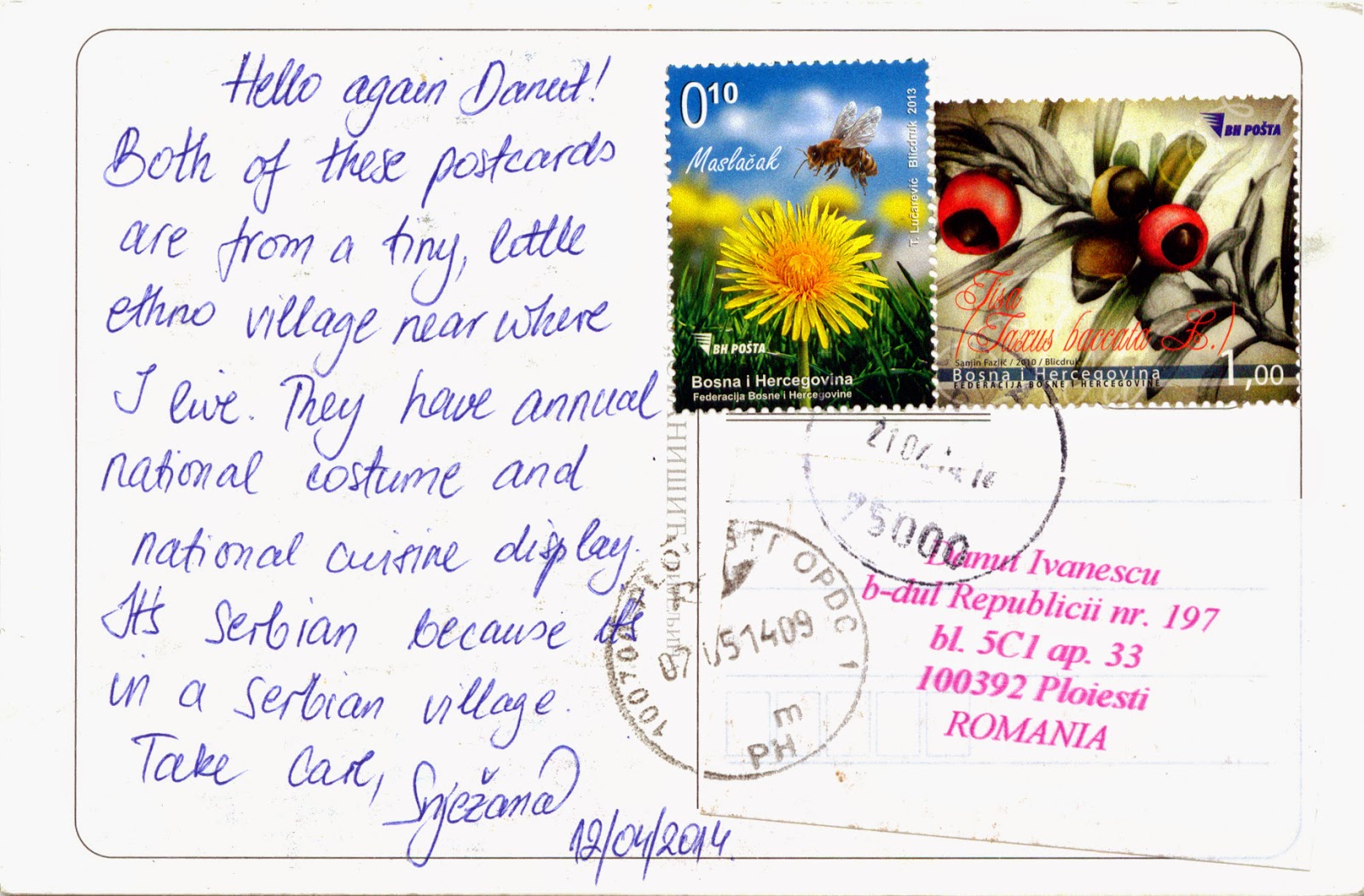 Traditional Serbian female costume consists of Opanci, embroidered woolen socks that reached to the knees and Nazuvice. Skirts are very varied, of plaited or gathered and embroidered linen, with tkanice serving as a belt. An important part of the costume are aprons (Pregace) decorated with floral motifs. Scarves bordered with cords were worn as headdress. Girls also wear collars, or a string of gold coins around their throats, earrings, bracelets, and their caps were decorated with metal coins. The men wear in the winter Šubara, a fur hat in a conical or cylindrical shape,  predominantly black, because of the black lamb/sheep fur (woolen). 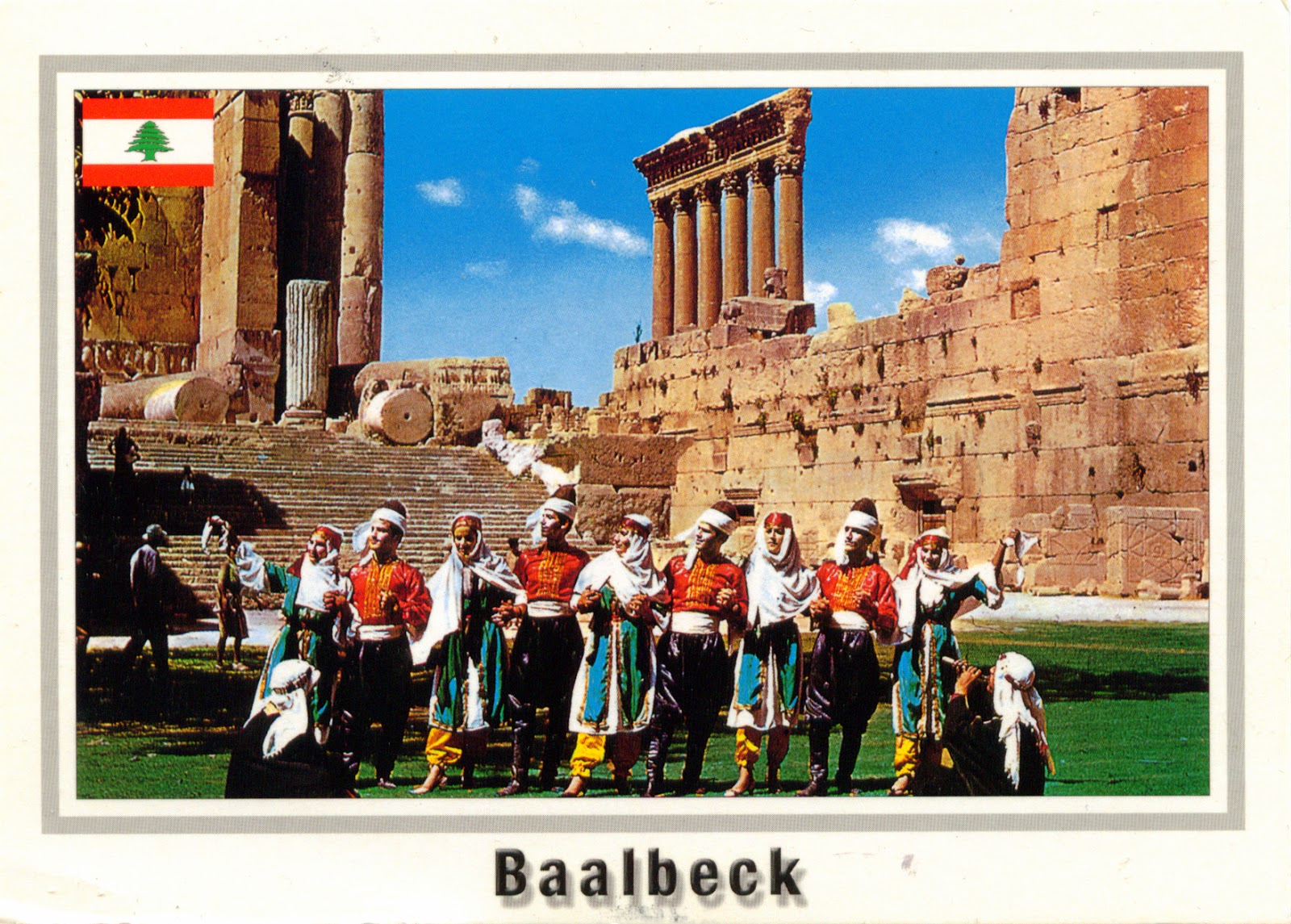 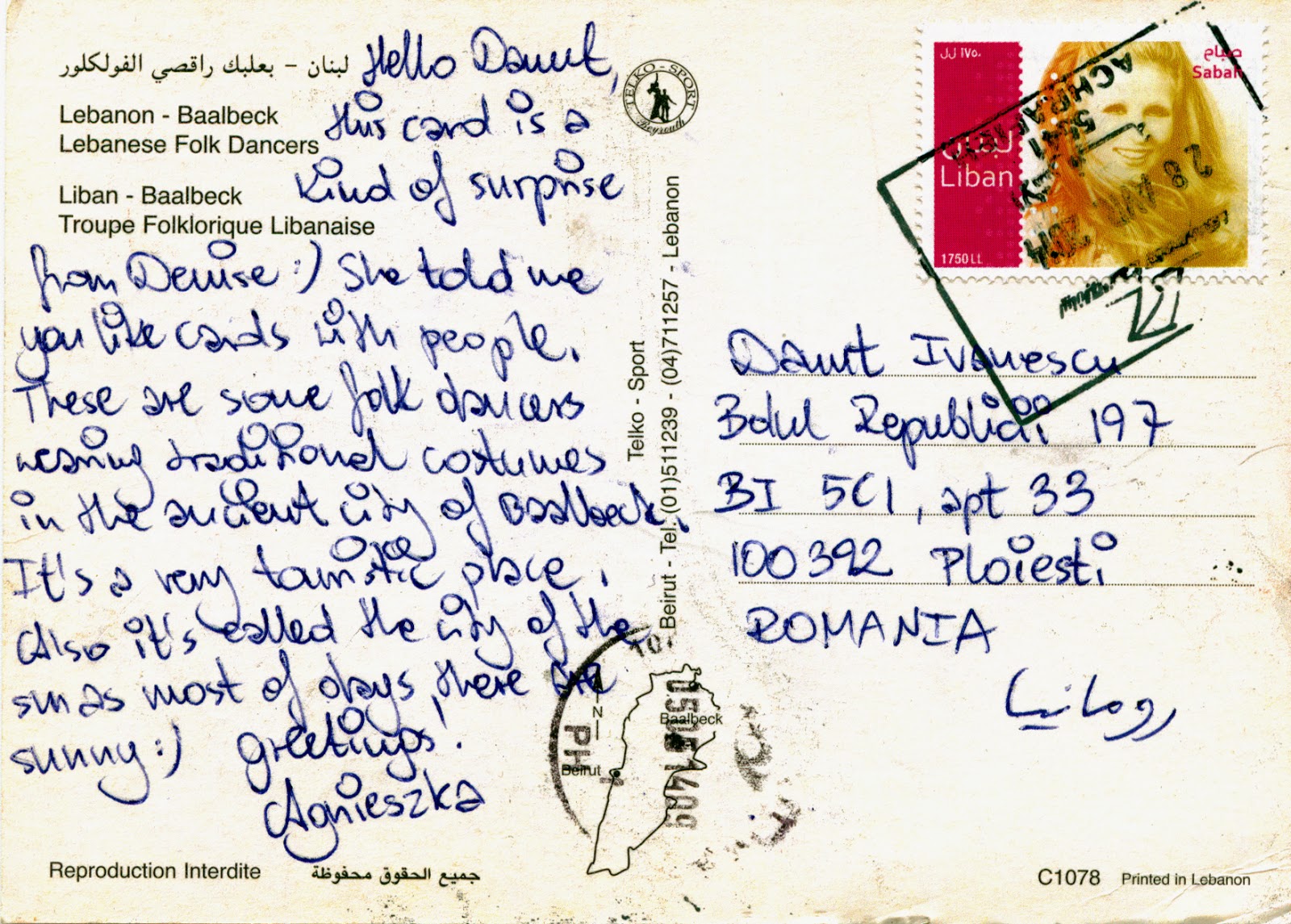 Situated east of the Litani River, in the Beqaa Valley, at the foot of the south-west slope of Anti-Lebanon, Baalbek, founded by Phoenicians and known as Heliopolis (in Greek, the City of the Sun) during the period of Roman rule, was one of the largest sanctuaries in the empire. The importance of this amalgam of ruins of the Greco-Roman period with even more ancient vestiges of Phoenician tradition, are based on its outstanding artistic and architectural value. The Roman construction was built on top of earlier ruins which were formed into a raised plaza, formed of 24 monoliths, the largest  weighing over 800 tons. The gods that were worshipped at the temple - Jupiter, Venus, and Bacchus - were grafted onto the indigenous deities of Hadad, Atargatis, and a young male god of fertility. Local influences are seen in the planning and layout of the temples, which vary from the classic Roman design. 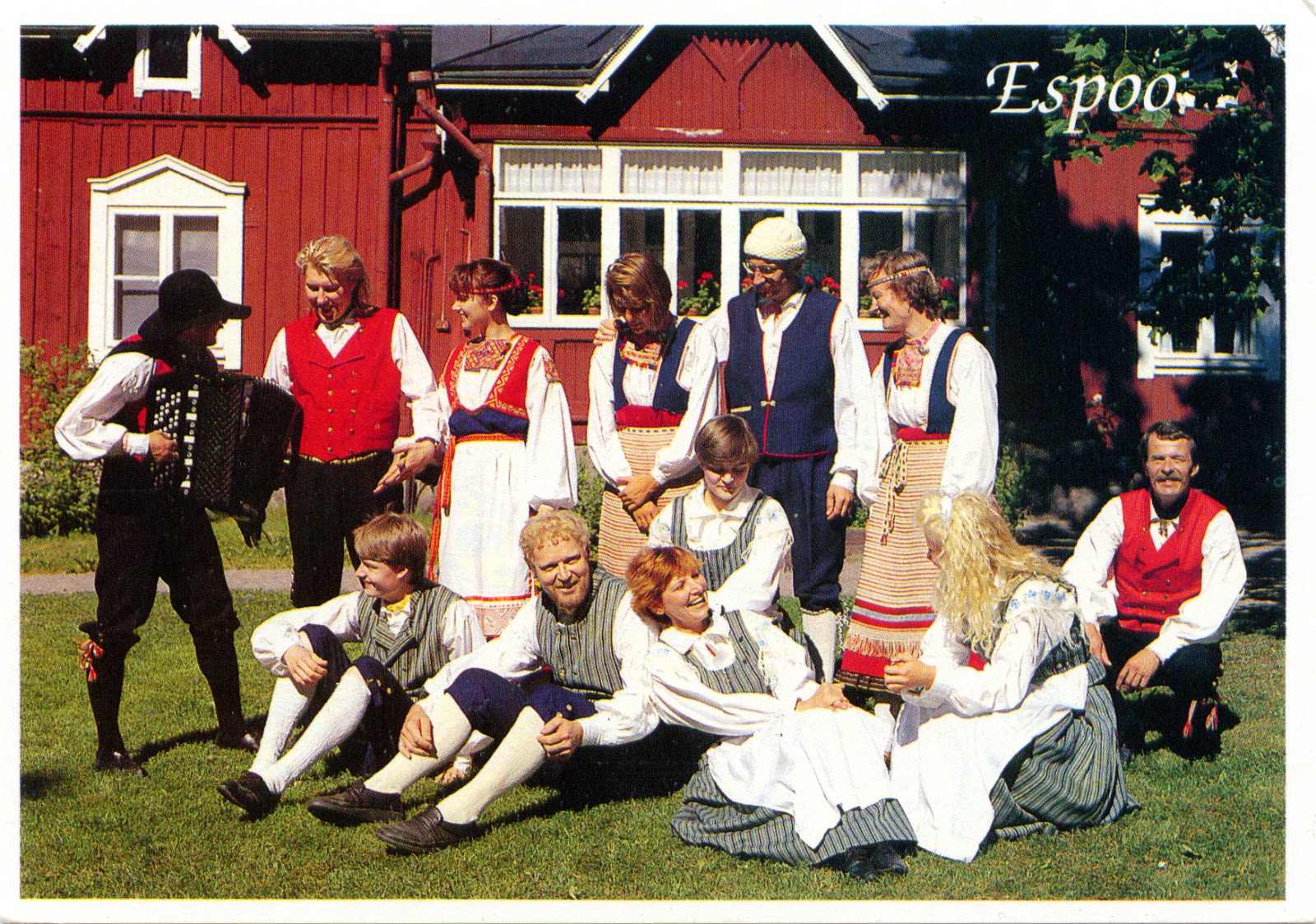 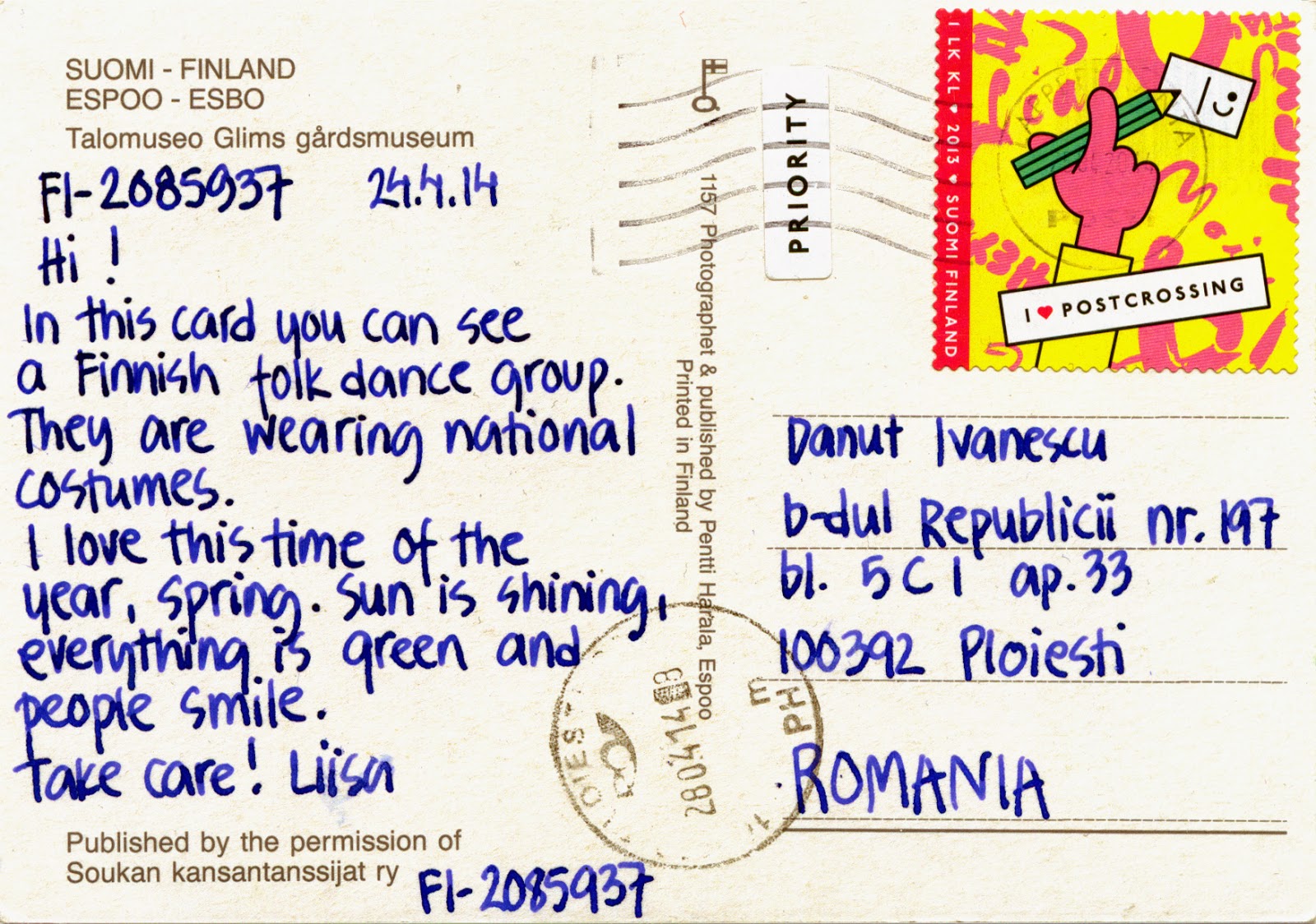 As in many of the european countries, the Finnish national costumes are based on the outfits of common people in the end of the 17th and the beginning of the 18th century. These outfits used to represent the estate of the wearer, so even there were dressing laws which forbade dressing too sophisticated for the ones who weren't in upper class. Common people therefore had to come up with ways to dress well without breaking the laws. These laws influenced a lot the dressing of common people and the way the Finnish national costumes look today. As the dialects of Finnish language, also the Finnish folk costumes are divided in two groups, namely western, and Karelian, or eastern. 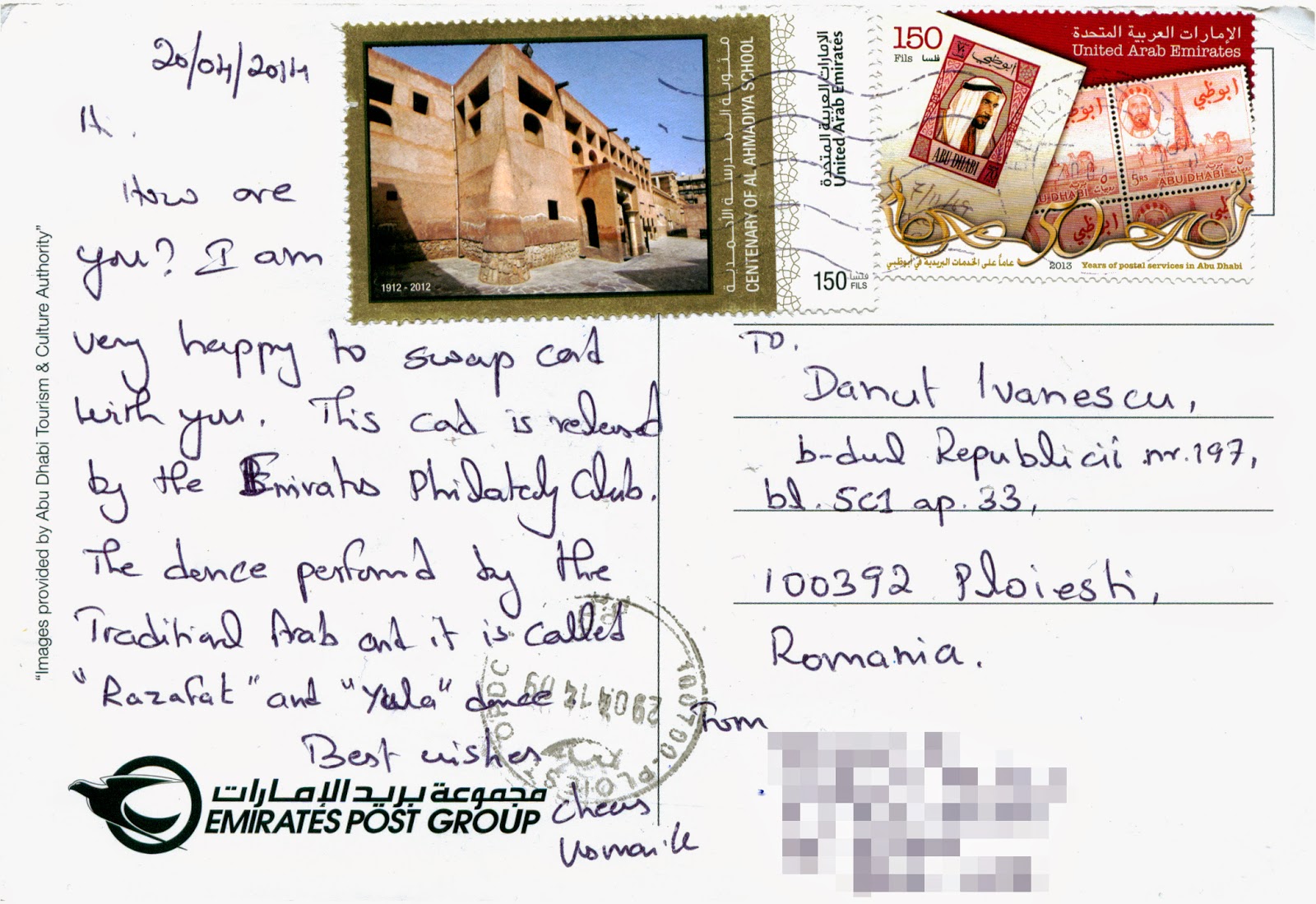 The United Arab Emirates is a part of the Arab khaleeji tradition (characterized by heavy use of the oud and tabl drum), and is also known for Bedouin folk music. Many of the songs and dances, handed down from generation to generation, have survived, even if today only 16.5% of the country's population are Emiratis, mainly originating from the Bani Yas tribe or with Persian origins (Sunni and Shia). The interpretation of these folk arts varies between the coast, the oases and the desert, but the structure is broadly similar and the common themes are pride, religion, praise, masculinity, strength and chivalry. 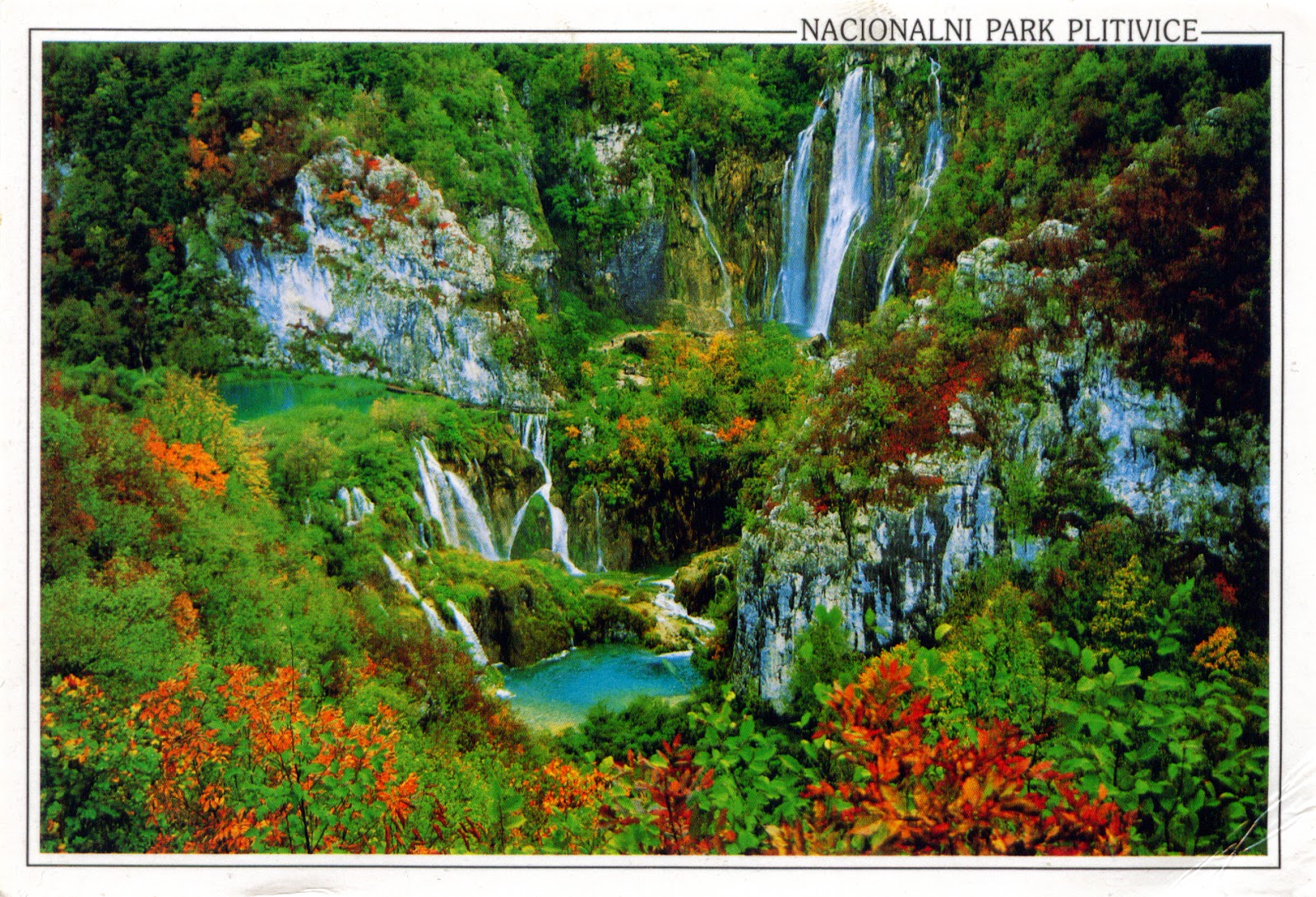 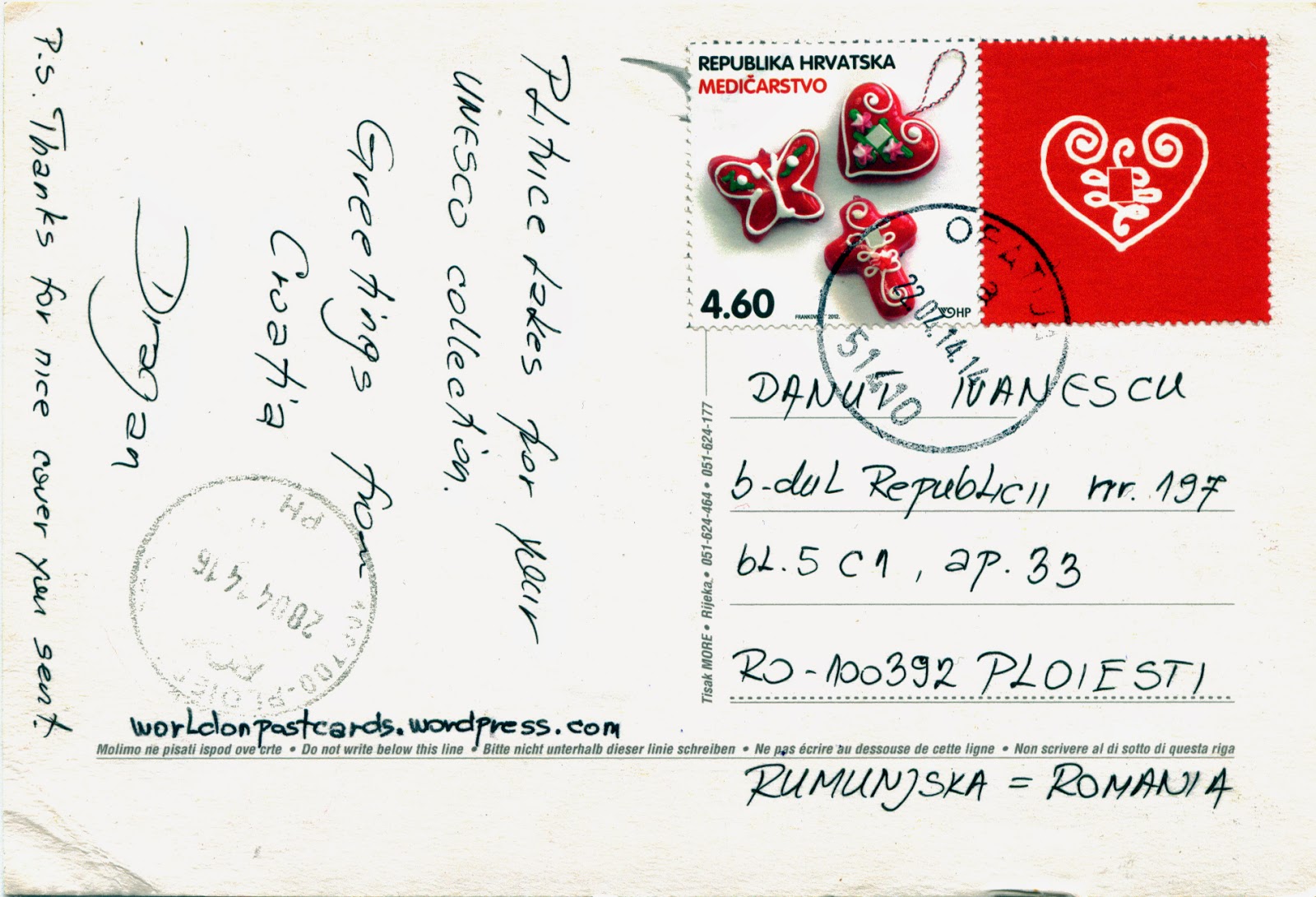 Situated in the mountainous karst area of central Croatia, at the border to Bosnia and Herzegovina, Plitvice Lakes National Park is the oldest national park in Southeast Europe and the largest national park in country. It is famous for the 16 lakes arranged in cascades between Mala Kapela Mountain and Pljesevica Mountain, a result of the confluence of several small rivers and subterranean karst rivers. The lakes are all interconnected and follow the water flow, being separated by natural dams of travertine, which is deposited by the action of moss, algae, and bacteria. The encrusted plants and bacteria accumulate on top of each other, forming travertine barriers which grow at the rate of about 1cm per year.