0493 ROMANIA - The administrative map of Transylvania in 1886 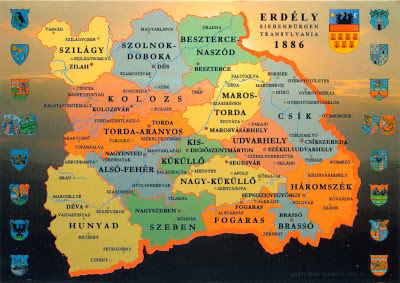 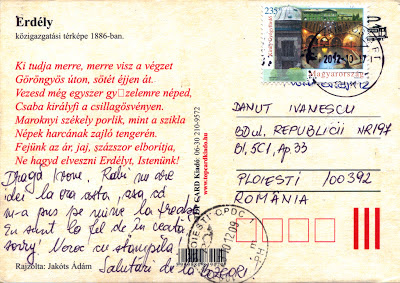 In this postcard is shown the administrative map of Transylvania in 1886, as stated on it in Hungarian, German and English. If the etymology of the name Transylvania is clear (the Latin terra ultra silva - land beyond the forest), as also the German Siebenbürgen (Seven fortresses - after the seven Transylvanian Saxons cities in the region), that of Erdély (in Hungarian) / Ardeal (in Romanian) is not fully elucidated. The two main theories supporting one a pathway based on the Hungarian erdő elv (erdő elő) - Erdeuelu - Erdély - Ardeliu - Ardeal, and the other one the Indo-European root Ard - Ardeliu - Erdély. Anyway, even since the Middle Ages prevailed the name Transylvania, primarily because Latin was the language of chancery.

Bounded on the east and south by the Carpathians range, the historical Transylvania (now in Romania) extended in the west to the Apuseni Mountains. Sometimes the term encompasses not only Transylvania proper, but also the historical regions of Crişana, Maramureş, and Romanian part of Banat. In the postcard is shown only proper Transylvania.

Even from the 2nd century BC, in Transylvania was the center of the Kingdom of Dacia, conquered in 106 AD by Roman legions. The Romans abandoned the province in 271, but many of the cities continued to exist. And certainly many villages which fed these cities. During the Migration Period, the territory was occupied (or only crossed), by Visigoths, Carpians, Huns, Gepids and Avars, and, after a brief period of Bulgarian rule, was partially under Byzantine control. When Magyar tribes arrived here, they found state formations and a mixed population, including Vlachs. Even their chronicler tells this in Gesta Hungarorum: "Hoc dum Tuhutum audivisset a legato, preparavit se cum suis militibus, et dimissis ibi sociis suis egressus est ultra silvas versus orientem contra Gelou ducem blacorum." (When Tuhutum heard this from an envoy, he readied himself with his warriors and, having left his companions there, went forth eastwards beyond the woods against Gelou, duke of the Vlachs)

Between 1003 and 1526, Transylvania was a autonomous voivodeship of the Kingdom of Hungary, and after the Battle of Mohács became part of the Eastern Hungarian Kingdom, which in 1571 was transformed into the Principality of Transylvania, a semi-independent state, under nominal Ottoman suzerainty. From 1711, the princes were replaced with the governors named by Habsburg Monarchy, and in 1765 Transylvania was declared a Grand Principality of Transylvania, further consolidating its special separate status within the Habsburg Empire. After 1867 the region was reabsorbed into Hungary as a part of the Austro-Hungarian Empire. Following the defeat of the empire in WWI, the Romanians, who remained majority despite the intense Magyarization process, proclaimed union with the Kingdom of Romania on December 1, 1918.

Since medieval times, the population of the region has been a mixture consisting mainly of Romanians (historically known as Vlachs), Hungarians, Székelys and Germans (known as Saxons). Since the 12th century, the Hungarian crown encouraged the settlement of the Székelys (the Hungarian speaking with controversial origin) and the Germans to defend the area, but also to develop it. In 1438, three Estates of Transylvania, the (largely Hungarian) nobility, the Saxon burghers, and the free military Szeklers, made a pact of mutual aid named Unio Trium Nationum (Latin for "Union of the Three Nations"), directed against the peasantry, many of whom were Romanian Orthodox Christians. This state of affairs was kept until 1918. On the census conducted by Austro-Hungarian authorities in 1910, the ethnic component of the 16 counties (the ones on the postcard, established at the administrative reorganization of 1876 and maintained until 1918) was following:

Why was printed in Budapest in 2006 this postcard, by a company that specializes in transportation-related postcards, Top Card Kiado, it seems to me obvious, especially since among hundreds of products offered on its website are only four maps: Hungarian Kingdom in 1886; Transylvania in 1886; Pest-Pilis-Solt-Kiskun counties in 1900; and the official national anthem of Hungary (adopted in 1844), having as background the map of the Hungarian Kingdom in 1886. True, nationalist extremists and irredentist exist in all countries (including in Romania), but it seems that so many nostalgic of imperial period as in Hungary are nowhere, and the authorities never rushed to become detached by them. Things become clearer when you turn back the postcard and find the following verses in Hungarian (English translation - Wikipedia):

"Who knows where destiny takes us
On a rough road on a dark night.
Lead your nation to victory once more,
Prince Csaba, on the stars' path.

Handful of Székely being crushed like the cliffs
On the storming sea of the battle of nations.
Our heads are, oh, a hundred times covered by the tide,
Don't let Transylvania be lost, Our God!"

These are the first two stanza of Székely Himnusz (Székely Anthem), written by György Csanády in 1921, since 2009 the anthem of the Szekler National Council (SNC). SNC is a political organization in Romania, founded in 2003, which claims to represent the interests of Székely, and demands, according to the organization's website, "the self-determination for the Székely Land on the Catalan model". CNS forget first that Romania is not a federative state like Spain, and both the map and the anthem refer to throughout Transylvania, not only to Székely Land, composed of the territories inhabited mainly by the Székely, i.e. parts of 4 counties (from 16) from the map (Maros-Torda, Csík, Udvarhely and Háromszék), corresponding to the present-day Harghita, Covasna, and parts of Mureş Counties in Romania.

The medieval Székely Land was an alliance of the seven Székely Seats (later decreased to five), which enjoyed a considerable but varying amount of autonomy, due to the military service the Székely provided. Its autonomy was abolished in 1876, when the Kingdom of Hungary create a unified system of counties.

This is a post for Postcard Friendship Friday #153, hosted on Beth's blog The Best Hearts are Crunchy. Click on the button below to visit all the other participants.