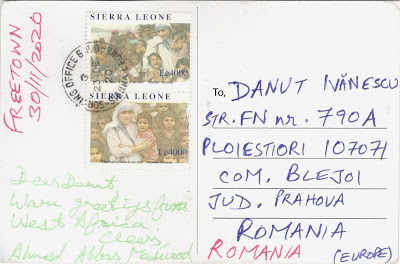 Even if Sierra Leone is a resource-rich country, it remains among the world's poorest countries, with 2011 estimates indicating nearly 53% of Sierra Leoneans living below the poverty line, and a life expectancy of 52.2 years. I don't know when this photo was taken, but I think it's significant for the standard of living in this country. Such clothes irons (filled with hot coals, or heated in a fire or on a stove) are no longer used in Europe from 7-8 decades.

About the stamps
The stamps are part of the series The 100th Anniversary of the Birth of Mother Teresa, issued on October 14, 2010.