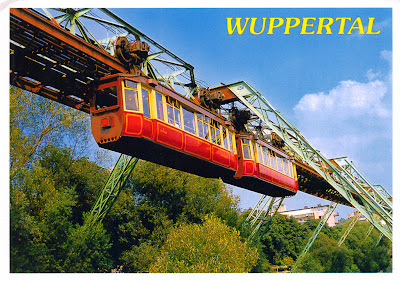 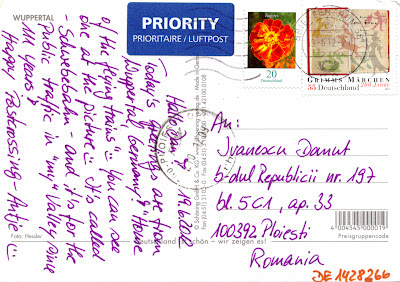 Who wouldn't want to live in a city like Wuppertal, where two-thirds of the total municipal area is green space? From any part of the city it's only a 10 minute walk in one of the public parks or woodland paths. In addition, Wuppertal (Wupper Valley), formed in 1929 by merging the cities of Barmen and Elberfeld with Vohwinkel, Ronsdorf, Cronenberg, Langerfeld, and Beyenburg, is known for its suspension railway, the Wuppertal Schwebebahn (Wuppertal Floating Tram), perfect because of the city's steep slopes.

On its full name Anlage einer elektrischen Hochbahn (Schwebebahn), System Eugen Langen (Electric Elevated Railway Installation (Floating Tram), Eugen Langen System), this suspended monorail was designed to be used in Berlin, but eventually was built in Barmen, Elberfeld and Vohwinkel, between 1897 and 1903. Around 19,200 tonnes of steel were used for the supporting frame and the train stations, and the construction cost 16 million Goldmark. Since 1901, the railway has closed only once, in WWII (when the city was heavily bombed by the allies, almost half of the houses being destroyed), but was open early in 1946. Traffic has been suspended several times, but for short periods. Have occurred also accidents, but no more serious or more numerous than those on ordinary railways.

Since 1997, the supporting frame has been modernised, many stations being reconstructed. In 2011 Wuppertaler Stadtwerke (Wuppertal City Works) signed a contract with Vossloh Kiepe to supply 31 new articulated cars to replace the 27 two-car trains of today, built in the 1970s.

The first stamp, depicting Tagetes, is part of the Blumen series (17 values), of which I have so far 4 values. 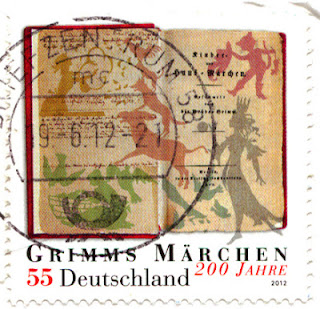 The second is a special one, designed by Barbara Dimanski and issued on 14 June 2012, having as theme 200 Jahre Grimms Märchen (200 years Grimm's fairy tales). It shows the inside cover of the original edition of Children's and Household Tales by the Brothers Grimm, 1812.