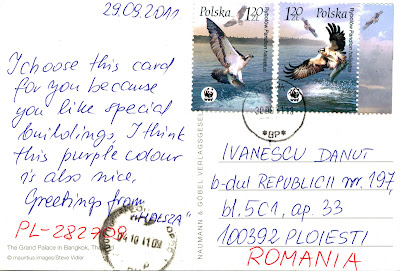 Undoubtedly, Bangkok's history is intimately linked to the Chakri dynasty, which leads Siam (named from 1939, with a brief interruption, Thailand) for more than two centuries. Founder of the dynasty, Buddha Yodfa Chulaloke (Rama I), was the one who moved the capital from Thonburi to Bangkok. Of course, the king had to have a palace and so appeared The Grand Palace (Phra Borom Maha Ratcha Wang), whose construction began in 1782, after a plan that closely followed that of the old palace in Ayutthaya.

The king, his court and his royal government were based on the palace until 1925. King Bhumibol Adulyadej (Rama IX), resided at Chitralada Royal Villa and his successor Vajiralongkorn at Amphorn Sathan Residential Hall, both in the Dusit Palace, but the Grand Palace is still used for official events. Situated on the banks of the Chao Phraya River, at the heart of the Rattanakosin Island, the palace complex (made up of numerous buildings, halls, pavilions set around open lawns, and gardens) is roughly rectangular. Its asymmetry and eclectic styles are due to its organic development, with additions being made by successive kings. 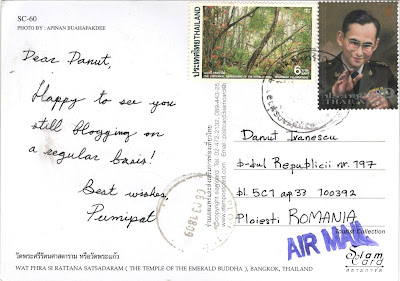 The first phase of construction began in 1868, then again in 1876, and the final phase between 1882 and 1887. The throne hall forms the front or the façade of the entire building group. The throne hall is constructed in an eclectic style, a blend of Thai and European (more specifically Renaissance or Italianate) styles. The lower part of the structure is European, while the upper part is in Thai-styled green and orange tiled roofs and gilded spires or prasats. 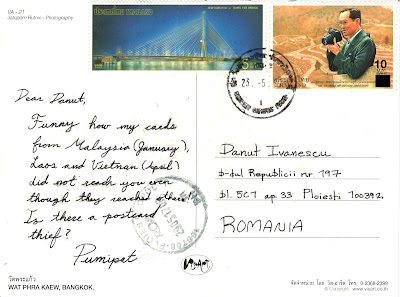 The Temple of the Emerald Buddha (Wat Phra Kaew), formally known as Phra Sri Rattana Satsadaram that means "the residence of the Holy Jewel Buddha", is actually a royal chapel, completed in 1784. Wat Phra Kaew has undergone a number of renovations, restoration and additions in its history, particularly during the reign of King Rama III and Rama IV. The architectural style is named as Rattanakosin style (old Bangkok-style). The main temple of the Emerald Buddha is decorated and similar to the temple in ancient capital of Ayutthaya.

It is surrounded on four sides by a series of walled cloisters, with seven gates. Like the royal temples of Sukhothai and Ayutthaya, the complex is separated from the living quarters of the kings. Within these walls are buildings and structures for diverse purposes and of different styles, but most of them adheres strictly to classical Thai architecture. It is regarded as the most sacred Buddhist temple (wat) in Thailand. 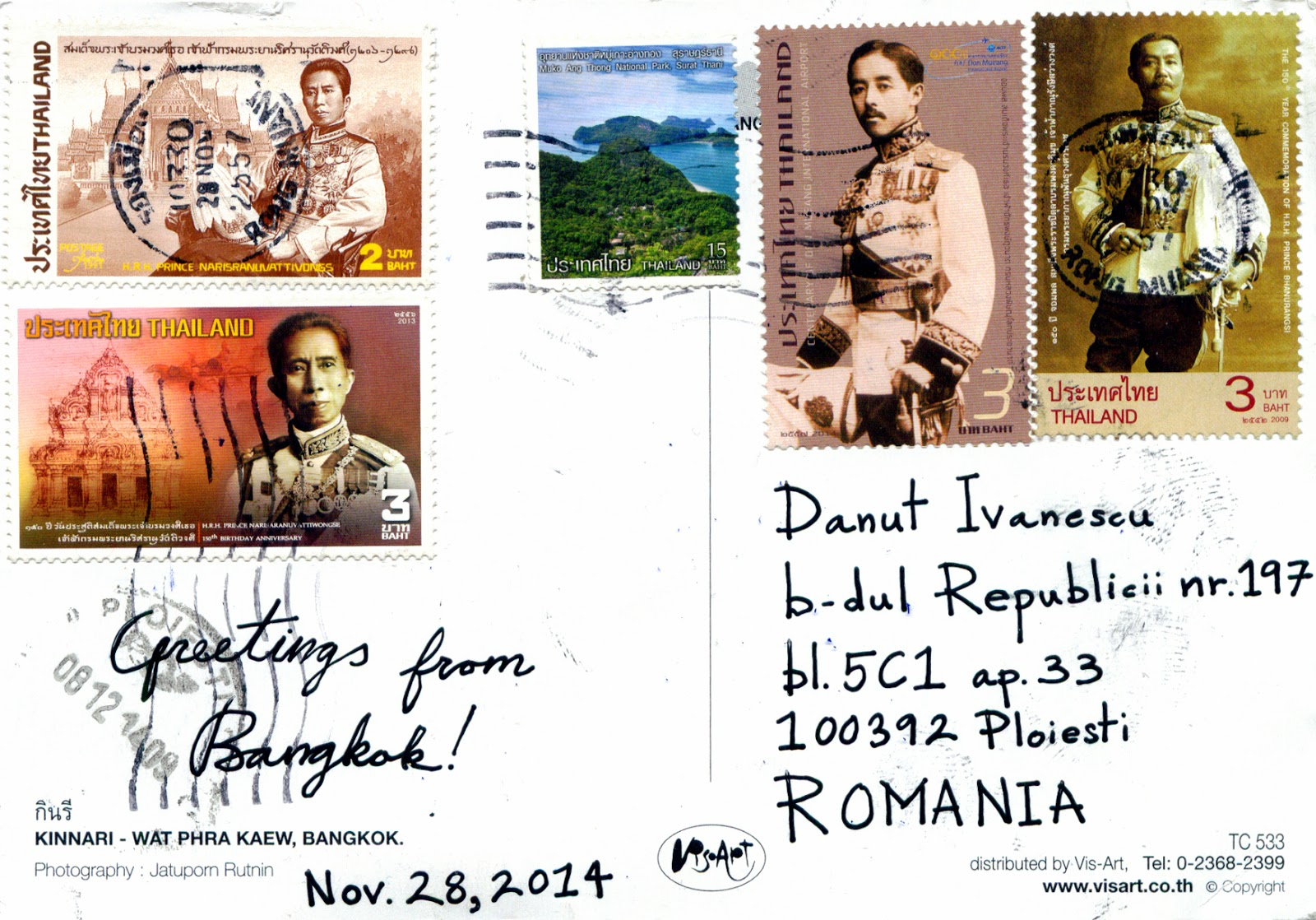 The main building is the central phra ubosot, which houses the statue of the Emerald Buddha. In the postcard 1433 is a golden statue of a kinnara, a half-bird, half-woman creatures at Southeast Asian Buddhist mythology, one of the many creatures that inhabit the mythical Himavanta. Kinnaris have the head, torso, and arms of a woman and the wings, tail and feet of a swan. She is renowned for her dance, song and poetry, and is a traditional symbol of feminine beauty, grace and accomplishment.

The Gate No. 2 (Na Wua Gate) of the complex is guarded by the statues of two demons (yaksha), Thotsakhirithon and Thotsakhiriwan, which appear in Ramakien (Glory of Rama), Thailand's national epic, derived from the Hindu epic Ramayana. They are the sons of Thotsakan (One with ten necks), a king of demons and their mother is a female elephant, that why they have trunks like an elephant. They are mostly depicted with a characteristic face, having big round bulging eyes and protruding fangs, as well as a green complexion. 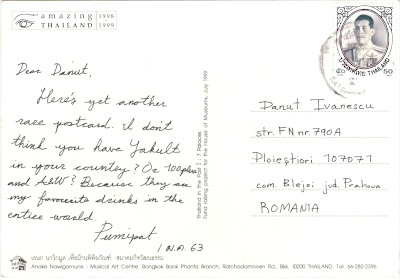 The Dusit Maha Prasat throne hall, built by Rama I in 1790, dominates the Maha Prasat group. The throne hall was built on a symmetrical cruciform plan, the roof is topped with a tall gilded spire. The hall is considered an ideal archetype of Thai traditional architecture. Every aspect of the exterior decoration of the throne hall is imbuded with symbolism. The hall is built in the shape of a tall mountain to represent Mount Meru, the mythological centre of the universe. The north face has a porch with a type of throne known as a busabok used by the king when gave public audiences.

About the stamps
On the postcard 0008 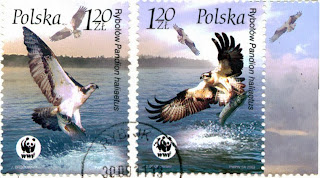 The stamps are Polish, because I received this postcard from Poland. All four stamps that form the set, which has been issued on 31.10.2003, picture the same endangered bird, the Osprey (Pandion haliaetus), spotted in various hypostasis, and have the same face value, 1.20 PLN. Each stamp bears the WWF logo in the bottom left corner. 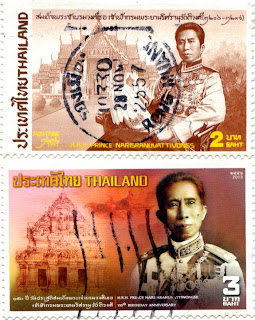 The first two stamps depict the prince Narisara Nuvadtivongs (Naritsaranuwattiwong; 1863-1947), the patron of Thai arts circles in his capacity as The Great Craftsman of Siam or the Divine Guru of all craft works. Owing to his ingenuity in arts of various fields, UNESCO has passed a resolution proclaiming him as one of the World Eminent Personalities in 1963. The second stamp was issued on November 11, 2013 to commemorate 150th anniversary of his birth, and presents his portrait with the background of his drawing of the Sun God Riding Chariot and the sketch of the Royal Rajadhivas Temple.

The third stamp is part of the series Tourist Spots in Thailand (Seaside 2nd series), about which I wrote here.

The fourth stamp is part of the series Centenary of Don Mueang International Airport, designed by Udorn Niyomthum and issued of July, 1st, 2014 (all stamps have the same face value, 3 THB):

On the postcard 2655
The first stamp is one of the five of the series issued on June 9, 1996 with the occasion of the 50th Anniversary of King Bhumibol's Accession to Throne as Rama IX (4th Series).

The second stamp was issued on March 3, 2004 to mark the Centenary of the Siam Society.

The last stamp was issued on December 5, 2009 to mark the 82nd Anniversary of the Birth of His Majesty King Bhumibol Adulyadej.

The second stamp was issued on July 2, 1988 with the occasion of The 42nd Anniversary of Accession to Throne of King Rama IX - 1st series (The Longest Reign Celebrations Commemorative Stamp).

The third stamp is part of the series The 60th Anniversary of the Birth of King Bhumibol Adulyadej, issued on December 5, 1987.

The last stamp is part of the series issued on July 2, 1988 with the occasion of The 42nd Anniversary of Accession to Throne of King Rama IX - 3rd series (The Longest Reign Celebrations Commemorative Stamp).

On the postcard 2831
The first stamp, depicting Rama IX, is part of a definitive set, about which I wrote here.

The first stamp is King Bhumibol Adulyadej's 86th Birthday Anniversary Commemorative Stamp, issued on December 5, 2013. King Bhumibol is the first monarch of the world to receive "The Humanitarian Soil Scientist" Award from the International Union of Soil Sciences (IUSS) through his performance of activities promoting and supporting continuous soil management.

The second stamp is part of the series issued on October 20, 1999 to mark the King's 6th Cycle Birthday Anniversary (3rd Series).

The last stamp is one of the seven of the series issued on December 5, 1997, to mark the King's 70th Birthday Anniversary.

On the postcard 3274
The first stamp is part of the series The Centenial Anniversary of The Royal Forest Department Celebrations Commemorative Stamps, issued on September 18, 1996. King Rama V had the Department of Forestry established on 18 September 1896 and affiliated it under the Ministry of the Interior, Mr. H.A. Slade was Thailand's first director.
• The Tropical Rain Forest (3 THB)
• The Hill Evergreen Forest (6 THB) - It's on the postcard 3274
• The Swamp Forest (7 THB)
• The Mangrove Forest (9 THB)

The second stamp, depicting King Rama IX, is one of the thirteen of the series The Royal Cremation Ceremony of His Majesty King Bhumibol Adulyadej Commemorative Stamps, issued on October 25, 2017 (3 designs of 3 THB and 10 designs of 9 THB).

On the postcard 3421
The stamp is part of a large definitive series depicting Rama X (Maha Vajiralongkorn, king of Thailand since 2016), about which I wrote here.