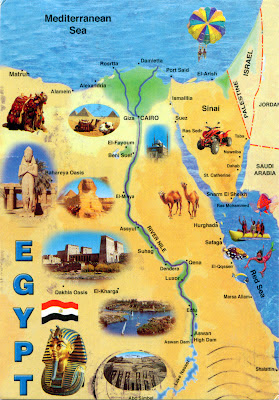 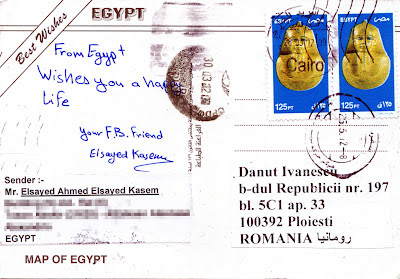 With an area of about 1,010,000km2 and a population of 81 million people, Egypt is today a major power in Africa and the Mediterranean Basin, as always was. Its map, as old and interesting as Egypt itself, has probably had more changes than that of any other existing country, because Egypt has existed as country longer than any other.

Geographically, the ancient Egypt was divided between north and south, known as Lower and Upper Egypt, and prior to the 1st Dynasty, these regions were politically separate. Around 3100 BC, the country was unified, but the Egyptians continued to think of their country as consisting of these two regions, each represented by different crowns (the red deshret crown of Lower Egypt and the white hedjet crown of Upper Egypt), combined into one, the pschent. Even today, they distinguish between Lower and Upper Egypt, and also frequently refer to Middle Egypt as a region between the north and south.

Today, the map of Egypt doesn’t cover as much land as it did during the Empire period of the New Kingdom, but it does take in more land than during some others periods of Egyptian history. For example, Aswan in southern Egypt was typically thought of as the southern boundary of Egypt proper, even when Egypt controlled much of Nubia further south. Today, the map of Egypt includes the upper part of what was once Nubia. To the west, the borders were always somewhat indistinct, but for much of ancient Egypt's history, most of the current Oasis regions were considered a part of Egypt. To the east, the ancient map of Egypt once took in a considerable amount of land, including a stretch along the Mediterranean Sea through present day Israel and up into Syria.

However, Egypt proper was still mostly thought of as ending somewhere along the division between Africa and the Sinai Peninsula, even though Egypt had control of the Sinai through much of its history. Today, the map of Egypt is divided politically into 26 governates, which include all the landscape, including the desert regions and the Sinai.