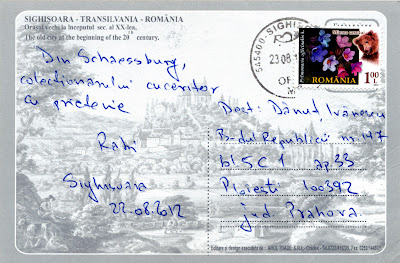 Posted on 01.12.2012 and completed on 07.02.2013
Because today is the National Day of Romania (Great Union Day - December 1, 1918, the Union of Transylvania with Romania) I post a postcard from Sighişoara, a city located in Transylvania. Historic Centre of Sighişoara, "a fine example of a small, fortified medieval town which played an important strategic and commercial role on the fringes of central Europe for several centuries", was designated a UNESCO World Heritage Site in 1999.

After they settled in the Pannonian Basin at the end of 9th century, Hungarians conquered large territories in Central Europe. Defeated in the Battle of Lechfeld (955), they stopped definitively the westward expansion, concentrating eastward (Transylvania) and southward (Balkan Peninsula). So, in 1003, Stephen I established the control over Transylvania, which became a voivodeship in the Kingdom of Hungary. During the 12th century, the King of Hungary invited the Saxons (later known as Transylvanian Saxons) to settle in Transylvania and defend the frontier of his realm. A wise decision, because in the next centuries the Saxons will have a very important role in the region, not only militarily, but also economically and socially. Actually the German name of Transylvania, Siebenbürgen, means "seven fortresses", and refers to the seven Saxons' cities in the region (in parentheses are the Romanian names): Mediasch (Mediaş), Muhlenbach (Sebeş), Hermannstadt (Sibiu), Clausenburg (Cluj-Napoca), Schässburg (Sighişoara), Reussmarkt (Miercurea Sibiului) and Broos (Orăştie). To these were subsequently added two others, Bistritz (Bistriţa) and Kronstadt (Braşov)


In nowadays Sighişoara is considered to be the most beautiful and well preserved inhabited citadel in Europe, with an authentic medieval architecture. In Eastern Europe, Sighişoara is one of the few fortified towns which are still inhabited. The houses inside Sighişoara Citadel show the main features of a craftsmen's town. However, there are some houses which belonged to the former patriciate, like the Venetian House and the House with Antlers.

The first postcard is a reproduction of an image from the early 20th century, when the city was still part of the Austro-Hungarian Empire. In the center of the picture can be seen the Clock Tower, the most impressive and the most picturesque. Built in the second half of the 14th century and expanded to 64m height in the 16th century, was the main gate into the citadel and it housed the town's council. After a big fire in 1676, the roof was restored to the present Baroque shape. The four small corner turrets symbolize the fact that the town had judicial autonomy, and the "right of sword" (ius gladii) which was the right to decide on capital punishment.

The tower houses the town's History Museum, spread on five levels, with rooms dedicated to each of the major guilds. At the top is a wooden balcony, from where can be seen the town's panorama. On the way to the balcony one can also see the clock mechanism, equipped with wooden figurines which marks the hours, times of the day (day or night), and the days of the week. The clock was installed in 1648 by Johann Kirschel, but the present mechanism is newer, dating from 1906.

About the stamps
The stamps on the both postcards, depicting the Common Lungwort, respectively Creeping Buttercup, are part of the first series Flora of Romania - Fauna flowers, about which I wrote here.