Posted on 15.12.2012, completed on 13.12.2013
Located in the north-east of Romania, in southern Bukovina, in Humorului Depression, at the confluence of Moldova River and Humor River, between forested ridges of Obcina Mare, Obcina Voroneţului and Obcina Humorului, Gura Humorului has almost 14,000 inhabitants (declining in the last two decades). From geographically, obcina indicates in Romanian some type of relief, with prolonged ridges, not very high, separated by parallel valleys, and etymologically, it remembers of common property of the free peasants on forests and grazing from these heights. In nowadays the town administers the former village Voroneţ (which became a neighborhood - in the second postcard in right), site of Voroneţ Monastery, one of the eight which formes the UNESCO World Heritage Site named Churches of Moldavia. Another one, namely Humor Monastery, is at only 5km. 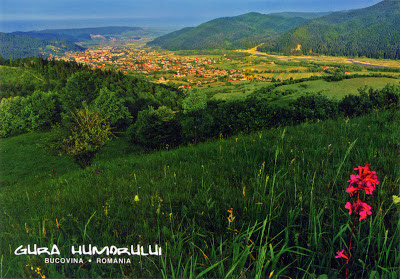 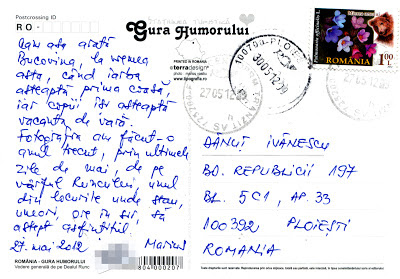 The first documentary mention of the settlement dates from 1490, in a document issued by the chancellery of Ştefan cel Mare. In 1782, seven years after the annexation of northern Moldavia by the Habsburg Empire, region called since then Bukovina (I wrote about that here), in Gura Humorului is moved Austrian military commander, which built here a fortress. After 1800, in the settlement began to establish Germans, Poles, Ukrainians, Rusyns and Hungarians, who founded in 1835 a colony named Bori. Since this year, began to settle here numerous Jews, who formed in 1869 around a third of the settlement's population. On May 11, 1899 a disastrous fire destroyed most of the settlement, but was rebuilt soon after, with donations from the United States Jewish communities, and in 1904 it received city status. On October 10, 1941 the fascist regime deported virtually all the Jewish community (2,945 people) to Transnistria, where most of them perished.

In the fourth postcard is the intersection of the road E576 (Suceava - Cluj-Napoca) and DJ177 (which leads to Humor Monastery), surprised by Marius Vasiliu in winter, exactly on December 21, 2012 (Ready for Christmas). In the distance can be seen the Cathedral of the Nativity of the Theotokos, completed in 2011, 16 years after the putting of the cornerstone. A wonderful postcard representing the map of Gura Humorului you can find here. 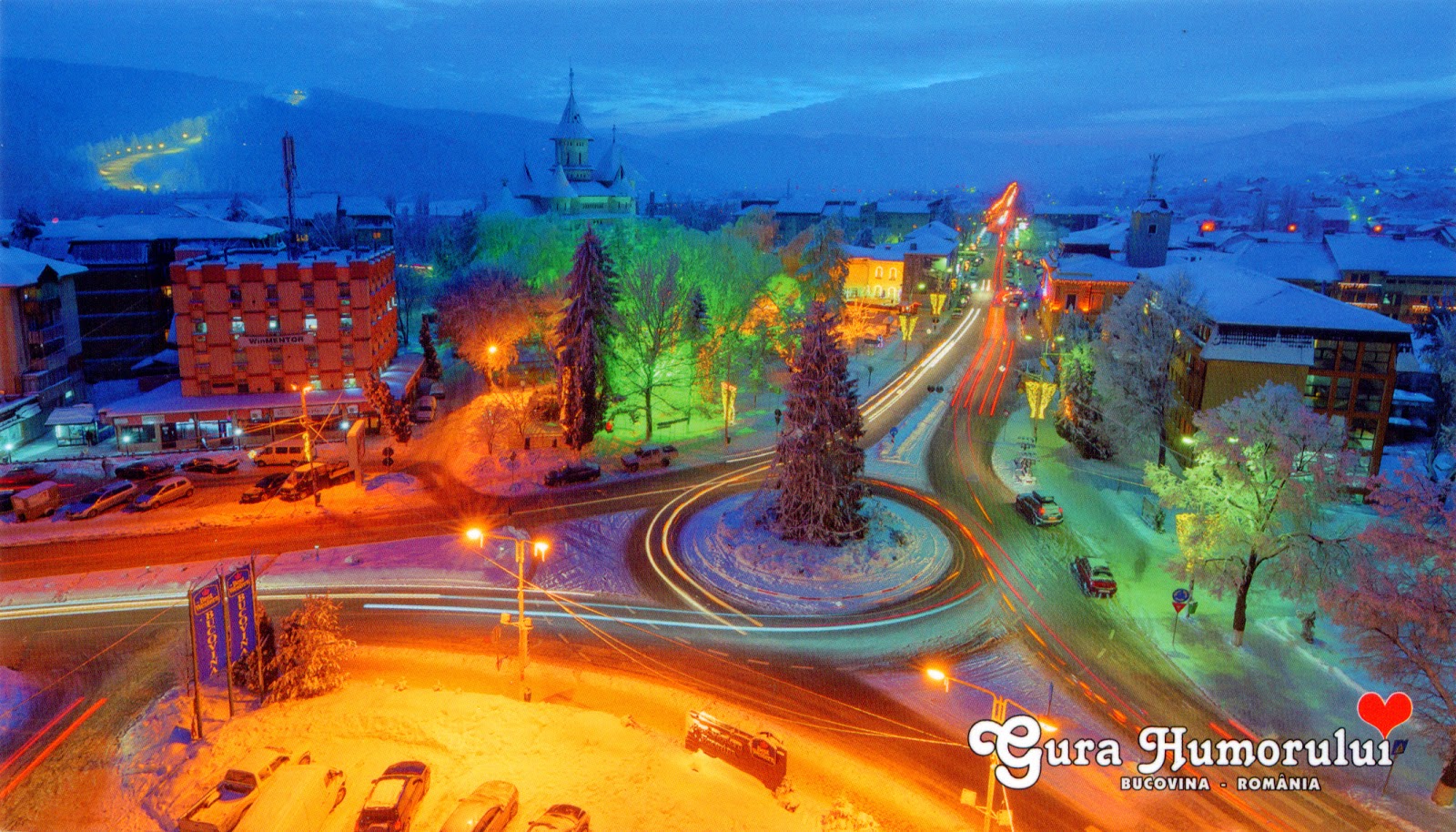 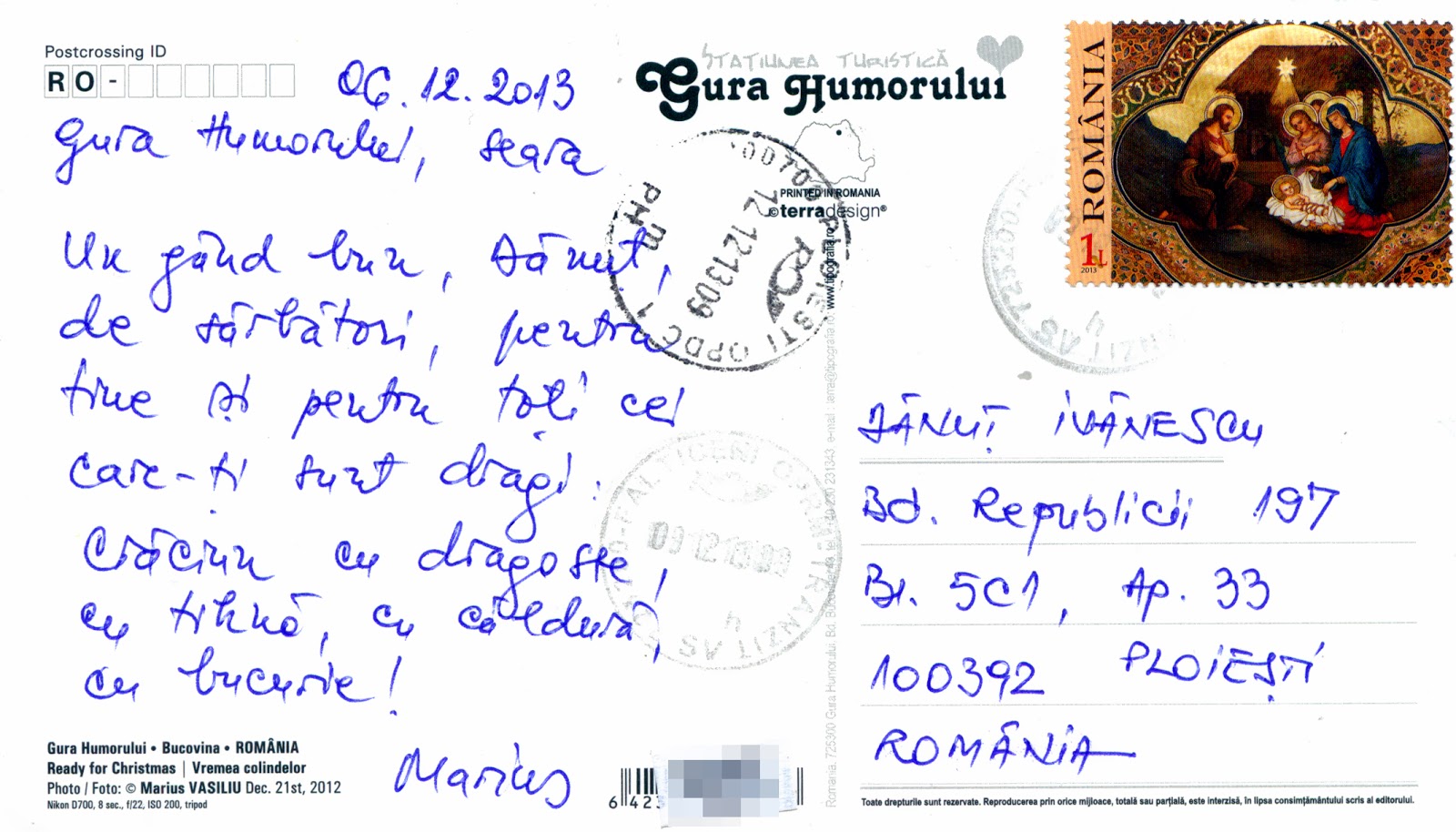 About the stamps
on the first postcard
The stamp is part of the series Trăieşte sănătos (Live Healthy!), about which I wrote here.

on the second postcard
The stamp is part of the first series Flora of Romania (Fauna flowers), about which I wrote here.

The second stamp is also part of the series Trăieşte sănătos (Live Healthy!), about which I wrote here.

On the fourth postcard

The stamp, depicting the images and icons belonging to Brancoveanu Settlements Patriarchal Chapel Domniţa Bălaşa Church from Bucharest, is the one issued on November 22, 2013, for the Christmas.

This is a post for Sunday Stamps #150, run by Viridian from Viridian’s Postcard Blog. The theme of this week is Holiday Stamps. Click on the button to visit Viridian’s blog and all the other participants.