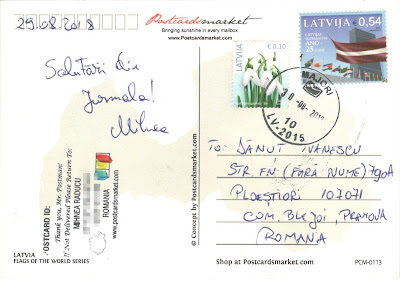 Posted on 05.03.2013, 09.01.2020
Located between Lithuania and Estonia, with outlet to the Baltic Sea, Latvia is one of the least populous and least densely populated countries of the European Union. More than 1,000 years ago, four Baltic tribes inhabited Latvia (Curonians, Latgalians, Selonians, and Semigallians), as well as the Livonians, speaking a Finnic language. Conquered in the 13th century by Teutonic Knights (who Christianized, with the sword, the indigenous tribes) it formed, together with Southern Estonia, the crusader state that became known as Terra Mariana or Livonia. 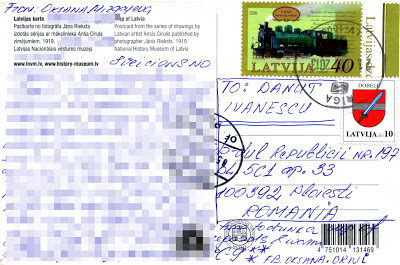 In 16th century it fell under Polish and Lithuanian rule, and in the following two centuries it has been involved in a struggle between the Polish-Lithuanian Commonwealth, Sweden, and Russia for supremacy in the eastern Baltic. Northern Livonia was conquered by Swedish, and throughout the 18th century Russia gradually occupied the whole territory, and so things remained until 1991, with only two interruptions (1918-1939 and 1941-1944).

Like many other European countries under a foreign yoke, Latvia took advantage of the power vacuum created by the Russian 1917 Revolution and the end of WWI and proclaimed its independence on 5 December 1918, which had to defend it with the gun in the hand for 20 months, until 11 August 1920. The map which is on the postcard 0541 is part of the series of drawings by Latvian artist Ansis Cirulis, published by photographer Janis Rieksts în 1919, and now belongs to the National History Museum of Latvia.

The current coat of arms of Latvia, designed by Rihards Zariņš, was adopted in 1921, and combines symbols of Latvian national statehood, as well as symbols of its historical regions. The three golden stars above the shield represent Vidzeme, Latgale and Kurzeme, and the golden sun in a blue field represents freedom. The bottom part of escutcheon is divided into two fields: the red lion from the Coat of arms of Courland, and the silver griffin from the Coat of arms of Livonia. Base of the coat of arms is decorated with the branches of an oak tree, Quercus robur, which is one of Latvia's national symbols.

Though officially adopted in 1923, the Latvian flag, red-white-red, was in use as early as the 13th century. The red colour is sometimes described as symbolizing the readiness of the Latvians to give the blood from their hearts for freedom and their willingness to defend their liberty. An alternative interpretation, according to one legend, is that a Latvian leader was wounded in battle, and the edges of the white sheet in which he was wrapped were stained by his blood. 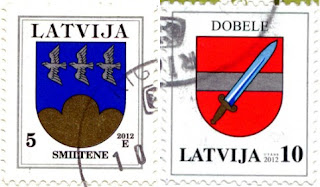 On the postcard 3342
First stamp is part of the series of definitive stamps Flowers, about which I wrote here. About the last stamp, issued to mark The 25th Anniversary of Latvian Membership of the United Nations, I wrote here.