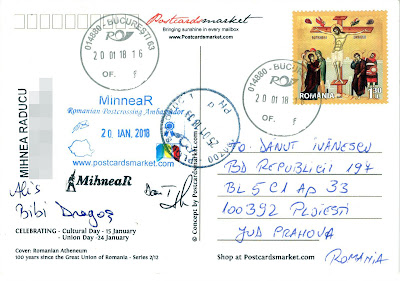 The second meeting of the Romanian postcrossers in the year of the Centenary of the Great Union (the 34th in total) took place on January 20, 2018 at the premises of the Philatelic Association of Bucharest. Since around this date the Romanians had other two reason to celebrate, these were also mentioned on the postcard. The first one was the National Culture Day, celebrated on January 15, the day in which in 1850 was born Mihai Eminescu, the Romanian national poet.

The second was the Union of the Romanian Principalities, celebrated on January 24 (colloquially named the Little Union - an unfortunate syntagm, unfairly derogatory, in my opinion, even if it is used only to distinguish it from the Great Union). On January 24, 1859 Alexandru Ioan Cuza was elected as the Domnitor (Ruling Prince) of the Principality of Moldavia and the Principality of Wallachia, creating in this way the United Principalities of Moldavia and Wallachia, the core of the Romanian nation state.

On the postcard is depicted the interior of the Romanian Athenaeum, one of the most important symbols of Romanian culture, over which was superimposed a part of the western border of Romania, trased with a tricolor ribbon (red, yellow and blue, the colors of the national flag). The Romanian Athenaeum was designed by the French architect Albert Galleron, built on a property that had belonged to the Văcărescu family and inaugurated in 1888.

On December 29, 1919, the Atheneum was the site of the conference of leading Romanians who voted to ratify the unification of Bessarabia, Transylvania, and Bukovina with the Romanian Old Kingdom to constitute Greater Romania. The ornate, domed, circular building is the city's main concert hall and home of the "George Enescu" Philharmonic and of the George Enescu annual international music festival. It has been inscribed in 2007 on the list of the Label of European Heritage sites.

At the initiative of Mihnea Răducu, between December 1 2017 and December 1 2018, so in the year in which the Romanians celebrated the centenary of the Great Union, took place every month a meeting of the Romanian postcrossers, and at each meeting has been edited a postcard to recall this exceptional event for the Romanians.

About the stamp
The stamp is one of the two issued on March 10, 2017 to celebrate Easter, about which I wrote here.

Sender: Mihnea Răducu and the Romanian postcrossers who participated to the Postcrossing Meetup which held in Bucharest on January 20, 2018.
Sent from Bucharest (Bucharest / Romania) on 20.01.2018
Edited by Postcardsmarket - 100 years since the Great Union of Romania - Series 2/12
Publicat de Dănuţ Ivănescu la 10:11 PM