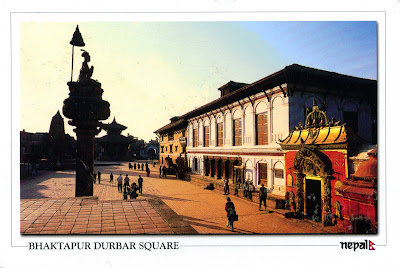 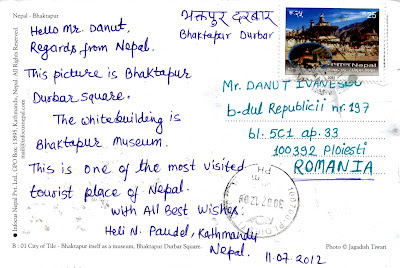 Posted on 21.09.2012 and completed on 10.04.2013
Only two UNESCO World Heritage Sites are located in Nepal, but if we consider the fact that one of them, Kathmandu Valley, has at least 130 important monuments, and occupies the entire region considered Nepal Proper by the people who live outside the valley, is not at all less. The site is composed of seven different Monument Zones: the centers of the three primary cities (Kathmandu, Patan and Bhaktapur), the two most important Buddhist stupas (Swayambhunath and Boudhanath), and two famous Hindu shrines (Pashupatinath Temple and Changu Narayan). The centers of the three primary cities are actually the Durbar Squares of these cities, belonging to the three kingdoms situated there before the Unification of Nepal, made by King Prithvi Narayan Shah in the mid-18th century. Durbar Square is the generic name used to describe plazas opposite old royal palaces in Nepal, durbar being a Persian term, which initial mean the Shah's noble court.

On the first postcard appears Bhaktapur Durbar Square, located, of course, in the town of Bhaktapur (literally meaning "The Town of Devotees", also known as Khwopa or Bhadgaon), which lies 13 km east of Kathmandu, on the old trade route to Tibet, and was the capital of Nepal during the Malla Kingdom, until the second half of the 15th century. The complex consists of four distinct square (Durbar Square, Taumadhi Square, Dattatreya Square and Pottery Square), but is known as the Bhaktapur Durbar Square. The actual Durbar Square houses the 55 Windows Palace, begun by King Jitamitra Malla and completed by his son, King Bhupatindra Malla. Home to royalty until 1769, now it is the National Gallery (in the first postcard) and hosts ancient and medieval paintings belonging to Hindu and Buddhist schools and depicting Tantrism of various periods and descriptions. 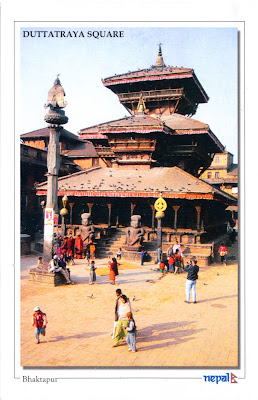 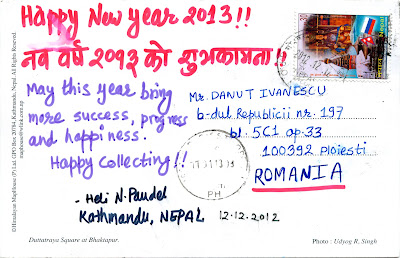 In right of the first postcard can be seen the Golden Gate (Sun Dhoka), actually made of brass, which is the entrance to the main courtyard of the palace and is considered one of the most important pieces of art in the whole Kathmandu Valley. Named Mulchok Court, the main courtyard is home of a temple dedicated to the goddess Taleju Bhawani and includes shrines to both the Taleju Bhawani and Kumari. Entrance to the temple is restricted to Hindus and the living goddess can’t be photographed. On the left, in shadow, on the top of a stone pillar standing on a lotus pedestal, is a golden statue of Bhupatindra Malla under the shade of Chudamani, a golden umbrella, in a praying position and facing the Taleju Temple.

In Bhaktapur Durbar Square are many other beautiful buildings, erected during three generations of kings. And what is seen today is just what remained after the earthquake of 1934, which destroyed or damaged almost all the palaces and temples in Durbar Square. Originally, there were 99 courtyards attached to this place, but now only 6 remained. 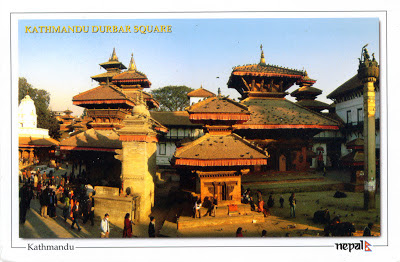 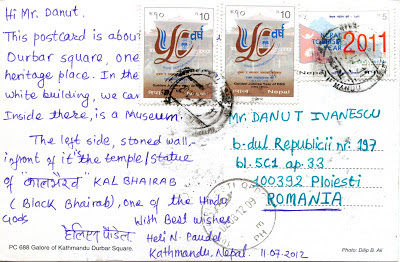 Known also as Basantapur Durbar Square, Kathmandu Durbar Square is named in present Hanuman Dhoka, due to the statue of Hanuman, the monkey devotee of Lord Ram. The first royal palaces were built here in the 3rd century, but they undergone repeated renovations so nothing remained from that period. Gunakamadev build also in the 8th century his palaces in this Durbar Square and from here ruled the Malla and Shah kings until 1896. Even today the square is the center of important royal events, like the coronation of King Birendra Bir Bikram Shah in 1975 and King Gyanendra Bir Bikram Shah in 2001.

This complex of palaces, temples, shrines, statues and courtyards, built between the 15th and 18th centuries, is a queer assortment of the old and the new. To try to write about each building, would be a risky endeavor, so I will specify only two things. Here is located the Kasthamandap temple, the Valley's oldest building, which gave the name of the city and is said that was created from the wood of a single tree. Into the Old Royal Palace's wall is a 17th-century stone inscription written in 15 languages; it is believed that milk will flow from the spout below if anyone deciphers the entire inscription. 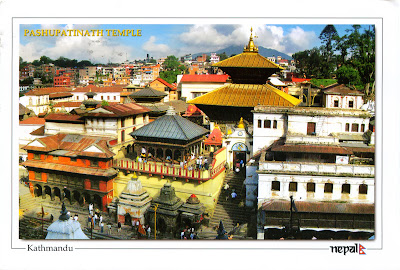 Located on the banks of the Bagmati River, Pashupatinath Temple is one of the most significant Hindu temples of Lord Shiva in the world, serving as the seat of the national deity, Lord Pashupatinath. It is one of the 275 Paadal Petra Sthalams (Holy Abodes of Shiva on the continent), and over the past times, only born Hindus were allowed to enter the temple. Kotirudra Samhita, Chapter 11 on the Shivalingas of the North, in Shiva Purana mentions this Shivalinga as the bestower of all wishes. The priests of Pashaputinath are called Bhattas and the chief priest is called Mool Bhatt or Raval.

The temple was erected anew in the 17th century by King Bhupendra Malla after the previous building had been consumed by termites. All the features of Nepalese pagoda style is founded here like cubic constructions, beautifully carved wooden rafters on which they rest (tundal). The two level roofs are of copper with gold covering. It has four main doors, all covered with silver sheets. It has a gold pinnacle (Gajur), which is a symbol of religious thought. The western door has a statue of large bull or Nandi, plated in bronze.

If even half of Nepalis are as friendly and helpful as Heli, who sent me these postcards, certainly Nepal is a very pleasant country.

About the stamps
On the first and fourth postcards
The stamp, issued in 2011, depict Yetser Jangchubling Monastery.

On the second postcard
The stamp is part of a set dedicated to the golden jubilee of diplomatic relations between Nepal and various countries (in this case Russia), about which I wrote here.

On the third postcard
The first stamp was issued with the occasion of Golden Jubilee Year of RSS (1962-2012). The second, designed by Mohan N. Rana, was issued on December 30, 2010 and has as theme Nepal Tourism Year 2011.

This is a post for Postcard Friendship Friday #134, hosted on Beth's blog The Best Hearts are Crunchy. Click on the button below to visit all the other participants.