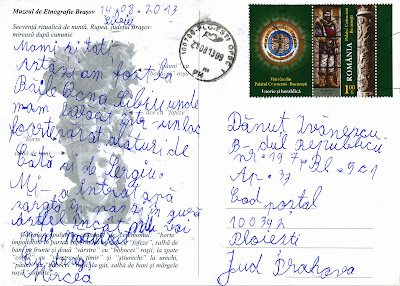 Moment with deep resonances in the universe of Romanian village, the wedding is one of the most important ritual thresholds that the human being must pass to fulfill its existence. The formation of the new family (intrarea tinerilor în rândul lumii - the entry of the young in line with the rest of the world) was and continues to be an event for the entire community, to which all the villagers bring their contribution. The weddings weren't held at random, but in those times when the works were appeased. Câşlegile de toamnă (between the Cross Day and shrovetide for the Christmas Fasting), along with Câşlegile de iarnă (between Christmas and Shrove Tuesday for Lent), represented once the time for the weddings. 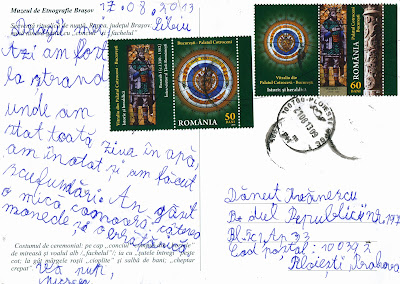 Of course there are differences between the customs of various regions of the country, but the main thread and the meanings are the same. Below I will try to do a synopsis of a wedding in Rupea, a settlement located halfway between Braşov and Sighişoara. From Thursday until Tuesday, with the peak on Sunday, at the homes of the bride and of the bridegroome, take place many ceremonial scenarios. Virtually every gesture, word, song, garment, jewel, loses its original function, becoming a sign with symbolic value of the ceremonial ranks of bridegroom, bride, couple's parents, godparents, heralds, horsemen, wedding guests etc. 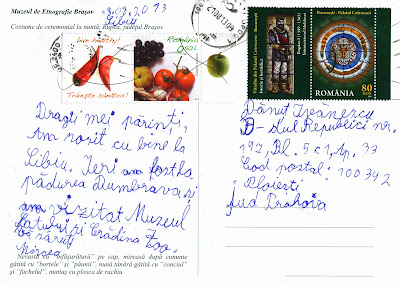 Friday, before the wedding, chemătorii (the heralds) walks through the village to invite people to the wedding. Saturday was carried cinstea (the foods from which will be prepared the dishes for wedding), and the bridegroom received as gift from the bride cârpa de pus la brâu (the cloth for put to the waist), woven from cotton with alesături (ornamentation of fabrics by separating and combining, by hand, after a pattern, of the yarns of warp and weft). 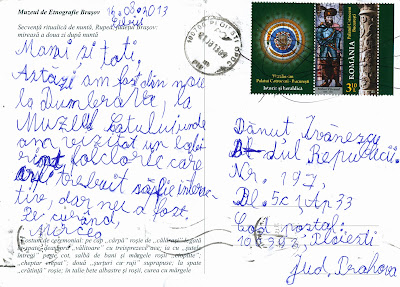 Sunday, at the groom's house, were gathered călăraşii (the horsemen), and one of them takes the bridegroom's flag, then he climbed into his wagon and headed to the godfather's house, accompanied by the young men on horseback. There, one of the horsemen received the godfather's flag, and the godparents, the lad of godfather, and the girl of godfather join to the procession, in another wagon, on their way to the bride's house. Of course, didn't lacked the musicians.

Once arrived there, one of the horsemen, crainicul (the announcer) began a spectacular speech in verse. He first stated that the groom is a emperor, and recounted how, been at a hunting, he saw a little flower that he wants to take. Only after that, was required the bride. First, appeared a false bride, and finally appeared the true one. She sprinkled the procession with water with a handful of basil, as a sign of welcome and contentment. Then she poured the remaining water at the feet of the bridegroom, showing that she know the woman's role and that she will be fertile, as the water brings abundance.


The mother of the bride, soacra mică (literally - little mother-in-law), strengthened the couple's covenant, putting in the hand of the groom colacul cu trei pinteni (a big bagel with three spurs), which signifies the life (the birth, the death, and between them the marriage). When the bride's dowry was loaded in the wagons, began the quarrel between women, versified and shouted. Some of them praised the bride, and others said that dowry was borrowed (the "arguing" will repeat at the downloading of the dowry in the groombride's yard). Before leaving the house, one of the horsemen received the bride's flag.

Boarded in the godfather's wagon, the bride joins to the procession which headed towards the church. The entry to the church was held in a certain order: godfather with the bride, the groom with the godmother. In front of the altar join them the lad and the girl of godfather. On leaving the church, was danced the bride's hora (a dance in circle), then the procession moved toward the groom's house, where took place some other acts of ritual significance, and the guests went home.

In the afternoon, the guests were returning to the wedding, bringing a colac and two eggs. They were served with hen soup and drink. In the evening they went to the groom, where they ate, drank and danced until dawn. At the midnight, the guests offered gifts to the new couple (cinstea), then follow cântatul găinii (hen's song). The women invited by the bride offered a hen to godfather, who paid it and take it at home, because in the day following will invite his godchild to a soup made ​​from it. The wedding last two days, the first day to the groom, and the second to the bride. At the end was danced perina (the pillow) and jocul miresii (the bride's dance), during which the bride received money, gathered into a bag held at waist.

The feast clothes could be recognized after the red carnation from the clop (hat of black felt, with cupola and narrow brim), and the black kerchief worn around the neck, with cănace (tassels) to corners, twisted and pulled through a ring (to the males), and şurţele (apron) of black silk, with flowers, worn over a black skirt (to the women). Often, cioarecii (tight leg pants, usually from rough homespun) were worn by men shoved in boots, and over the shirt they had a chieptar (a sheepskin waistcoat). The man in the postcard 0835 wears chimir (a wide leather belt with pockets) and holds in hand a ploscă (a vessel round and flat, with a neck short and narrow, for drink).

The women wore ie (a blouse made ​​of white cloth of cotton, flax or silk, adorned with embroidery), tall black boots and chieptăriţă, like men's chieptar, from tanned sheepskin, embroidered with arnici (cotton threads twisted), generally red and black. The bride in the postcard 0833 has the hair braided with ribbons and wears on head borte (square ornaments, placed in rows), trimmed at the top with needles with fofeze and peacock feathers, necklace of coins on his forehead, and two vârstre (vârstrat means striped) with red flower buds. At the rear is a coif (helmet) with vârstre de ţimir, on the ears ştiurechi, and around the neck a necklace of coins and red beads.

Note: The sloppy handwriting belongs to my son, Mircea, who when sent these postcards just graduated first class. In addition, are the first postcards written entirely by him.


Below you can watch a documentary film funded by AFCN and made by TVR Cluj: Gheorghiţă Radu şi Junii Cetăţii Rupea - "Nuntă tradiţională din Rupea" (Traditional wedding at Rupea)

About the stamps
First of all, I need to say "thank you" to the officials of the post office from Sibiu from which have been sent the postcards. As you can see, wasn't applied any postmark, the stamps being scrawled with a pen. You lost your stamper, ladies and gentlemen? Yours indifference and incompetence filled me with indignation. Shame on you.

The first stamp from the postard 0835 is part of the series Live Healthy!, about which I wrote here.

This is a post for Postcard Friendship Friday #189, hosted on Beth's blog The Best Hearts are Crunchy. Click on the button below to visit all the other participants.