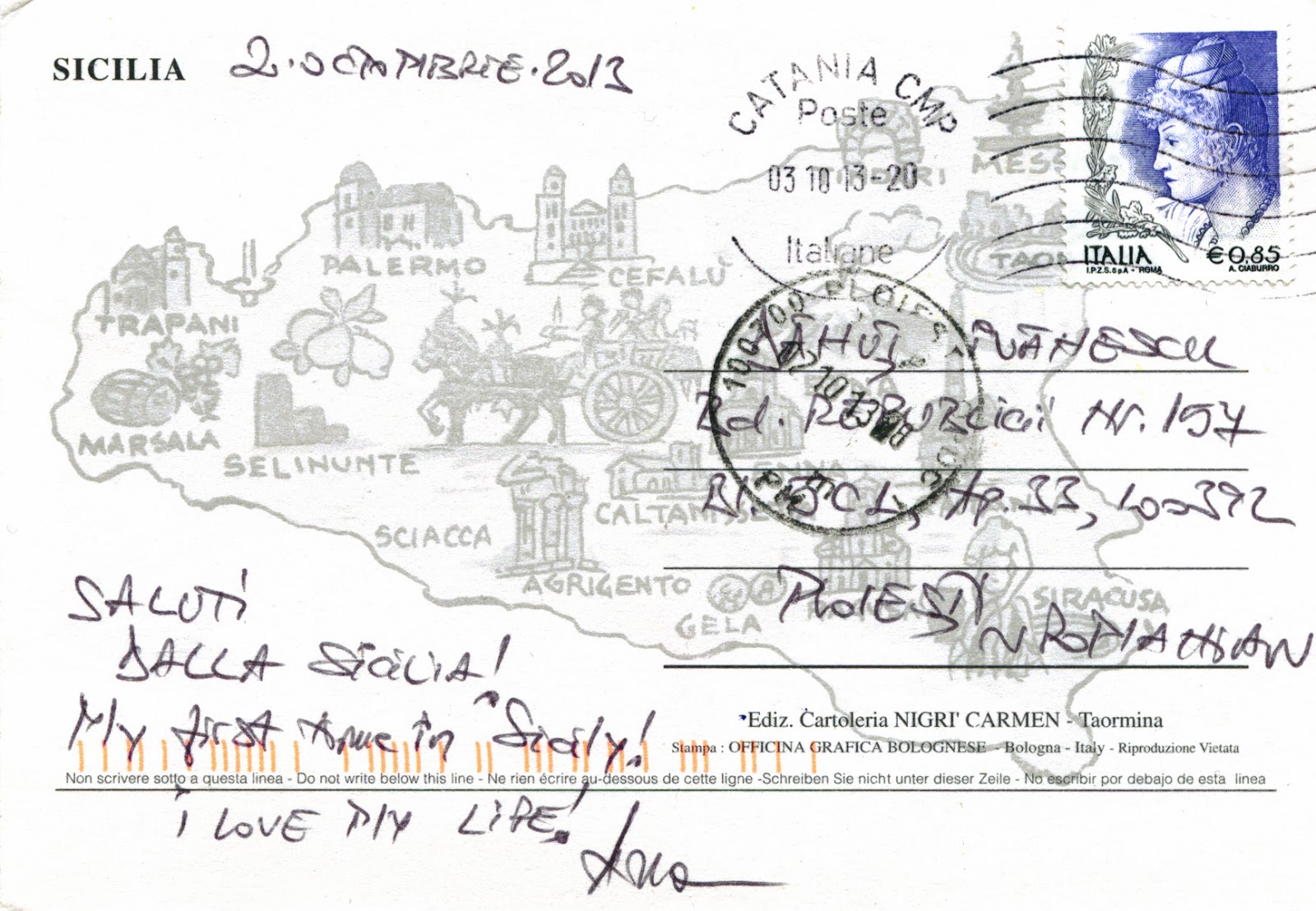 Posted on 12.01.2014, 19.09.2015, 19.01.2017, 12.03.2017
Located in the extension of the tip of the Apennine peninsula, from which is separated only by the narrow Strait of Messina, Sicily is the largest island in the Mediterranean Sea. Its terrain is mostly hilly and intensively cultivated, but has also mountain ranges. The eastern coast is dominates by the Mount Etna, the largest active volcano in Europe, and the Aeolian Islands, in the Tyrrhenian Sea, to the northeast of mainland Sicily, exhibit also a volcanic complex, including Stromboli. With a population of slightly more than 5 million, it has only two metropolitan areas: the capital Palermo, and Catania. 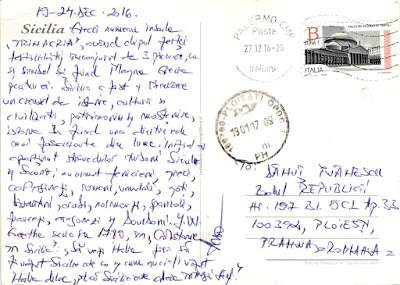 For a long time the poorest region of Italy, with a social, economic and political life dominated by Mafia (Cosa Nostra), which led to massive waves of emigration, especially in Americas, in the last years Sicily had a regular growth, mainly due to the reforms in agriculture, the investments in industry and tourism development, so that today it is the eighth richest italian region in terms of total GDP. The earliest archeological evidence of human dwelling on the island dates from 8000 BC. At around 750 BC it was host to Phoenician and Greek colonies and for the next 600 years it was the site of the Greek-Punic and Roman-Punic wars, which ended with the destruction of Carthage. 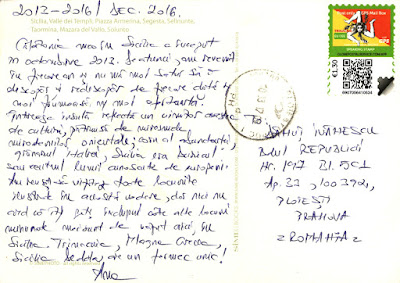 After the fall of the Roman Empire, Sicily often changed hands, and during the early Middle Ages it was ruled in turn by the Vandals, Ostrogoths, Byzantines, Saracens and Normans. Later on, the Kingdom of Sicily lasted between 1130 and 1816, first subordinated to the crowns of Aragon, Spain, the Holy Roman Empire, and finally unified under the Bourbons with Naples, as the Kingdom of the Two Sicilies. Following the Expedition of the Thousand, a Giuseppe Garibaldi-led revolt during the Italian Unification process and a plebiscite, it became part of Italy in 1860. After the birth of the Italian Republic in 1946, Sicily was given special status as an autonomous region. 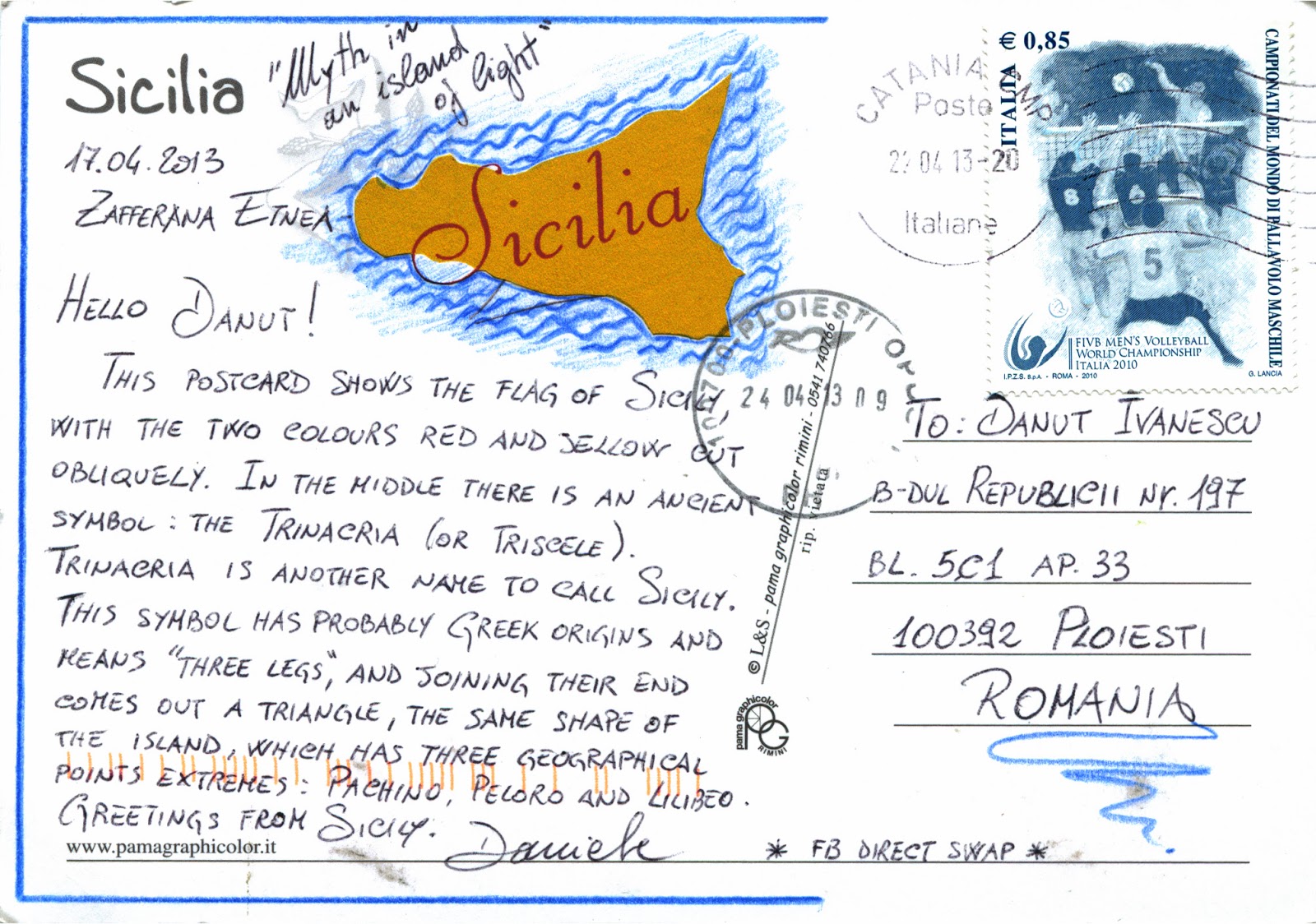 As in the rest of Italy, the official language is Italian (even if the most people are bilingual and speak also Sicilian, a distinct and historical Romance language) and the primary religion is Roman Catholicism. In its long and tumultuous history, it received a variety of different cultures, each of them contributing to the island's culture, particularly in the areas of cuisine and architecture. It's the reason for that it has a rich and unique culture, many poets, writers, philosophers, intellectuals, architects and painters having roots on the island. 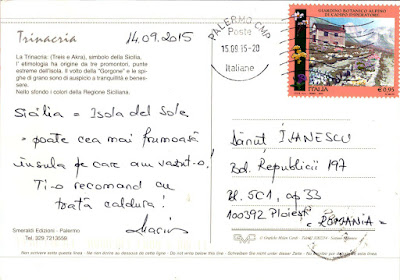 The flag of Sicily (which is also its coat of arms) was first adopted in 1282, after the successful Sicilian Vespers revolt against the king Charles I of Sicily. It is characterized by the presence of the triskelion (trinacria) in its middle, the (winged) head of Medusa and three wheat ears. The three bent legs allegedly represent the three points of the triangular shape of the island. The present design became the official public flag of the Autonomous Region of Sicily on 4 January 2000. The flag is bisected diagonally into regions colored red and yellow, red representing the municipality of Palermo, yellow representing Corleone, which in medieval times was an agricultural city of renown. The triskelion appears also on the flag of the Isle of Man.

About the stamps
On the postcard 0963
The stamp, showing the painting Courtesans, by Carpaccio (0.85 EUR), is part of a definitive set named Donna nell'arte (Women in Art), about which I wrote here. 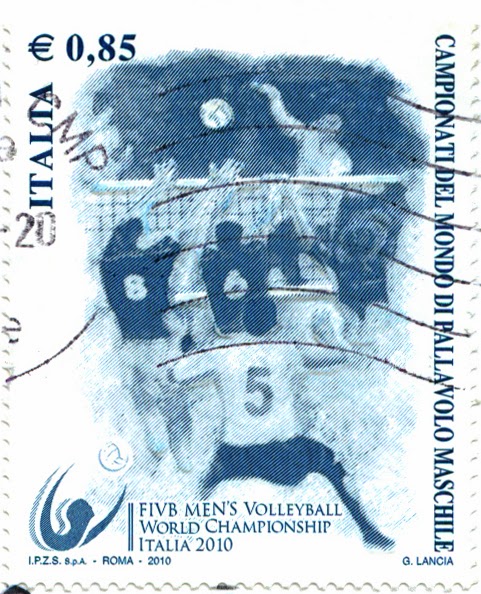 The stamp was issued on September 24, 2010, to celebrate FIVB Volleyball Men's World Championship which held in that year in Italy, from 25 September to 10 October. The image, created by the stamp designer and engraver Giuseppe Lancia, represents some players in action during the match and at the bottom left there is the logo of the World Championship.

On the postcard 1907
The stamp are part of the series Parks, Gardens and Botanic Gardens, about which I wrote here.

On the postcard 2981
The stamp is part of a series of GPS stamp, about which I wrote here.