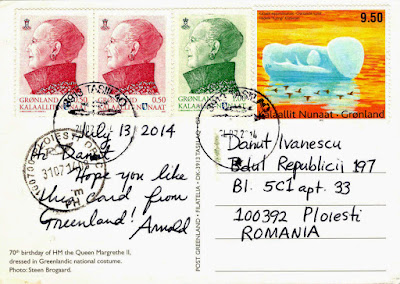 Greenland became a  Danish colony in 1814, and a part of the Danish Realm in 1953, as an autonomous country. Since 2008, Greenland enjoy broad autonomy, but still is part of the  Kingdom of Denmark, and Queen Margrethe II is the head of state. Margrethe II, full name: Margrethe Alexandrine Þórhildur Ingrid; born 16 April 1940) is the eldest child of King Frederik IX and Ingrid of Sweden, and succeeded her father on 14 January 1972. On her accession, she became the first female monarch of Denmark Margrete I, ruler of the Scandinavian countries in 1375–1412 during the Kalmar Union. In 1967, she married Henri de Laborde de Monpezat, with whom she has two sons: Crown Prince Frederik (born 1968) and Prince Joachim (born 1969). The Queen and her siblings belong to the House of Glücksburg, which is a branch of the Royal House of Oldenburg.

In former times the Inuits only wore clothes made from animal hides or skins, warm and hardwearing. When the Europeans set foot in Greenland in the 17th and 18th centuries, they brought with them clothing fabrics and glass beads as goods to trade. These materials gradually become incorporated into the Inuits' dress, particularly for festive attire. For men the hide trousers were replaced by a thick woollen material called holmensklæde (literally island cloth), and for women the anorak was sewn in silks. It gradually became prestigious to use more and more beads, and this trend is particularly visible on the women's national costume. The composition of the national costumes of Greenland is more or less the same in all its areas. Only some small details and in particular the colors are different.

The standard parts of the costume include a silk, satin or, in rare cases, woolen surcoat. The neck is closed with a narrow leather collar and the sleeves also have a leather trim. The most dominant part of the costume is worn over the fabric surcoat (essentially a blouse with long sleeves) and it consists of an outer garment made from colored seed beads sewn onto fabric. The trousers (takisut) are made from fine sealskin. Around the waist there is a belt made of black leather with the hair removed and two decorative stripes are sewn onto the front sides of the thighs. This type of decoration is called avittat and it is usually further emphasized by means of the inclusions of small colored strips of leather. The conspicuously large kamik shoes are sewn from sealskin, bleached and have the hair removed from the skin. The kamiks of older women can be dark blue or yellow. Younger women can wear red kamiks. The majority of snow-white kamiks are decorated with decorative strips with a floral design. 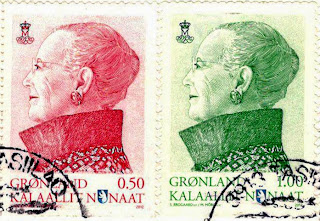 The first two stamps are part of a definitive series, reprint on October 22, 2012 and depicting Queen Margrethe II.

The last is part of the series Contemporary Art VI, issued on January 16, 2012.

This is a post for Sunday Stamps II-23, run by Violet Sky from See It On A Postcard. The theme of this week is: Royalty, from any country (but a bonus if it's Victoria). Click here to visit Violet’s blog and all the other participants.