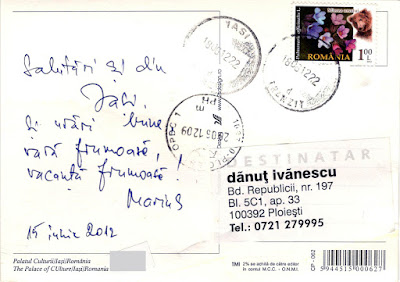 Posted on 05.10.2015, 22.07.2016, 05.12.2019
Recognized as an effigy of the city of Iaşi (the capital of the Principality of Moldavia from 1564 to 1859), the Palace of Culture hosts, since 1955, the Moldova National Museum Complex, consisting from four museums, as well as other cultural institutions, after previously served as Administrative Palace and then Palace of Justice. It was built between 1906 and 1925, partly on the old ruins of the mediaeval Royal Court of Moldavia (1434), and partly on top of the foundations of the former neoclassical style palace, dated to the time of Prince Alexandru Moruzi (1806), rebuilt by Prince Mihail Sturdza and dismantled in 1904.

Designed in flamboyant neo-Gothic style by the Romanian architect Ion D. Berindey, the Palace has 298 large rooms, 92 windows in the front part of the building and another 36 inside the building. The wings of the building were withdrawn and decorated with statues of archers that stand sentry, and on the sides were built two entries in the form of vaulted towers. Entry into the palace is through a large dungeon tower, with battlements and alcoves dominated by an aquila with open wings. 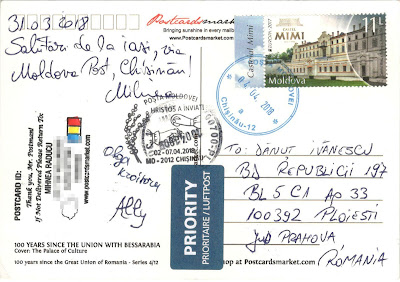 Elements of tourist interest are, at the ground floor The Gothic Hall (where can be admired a mosaic that represents a gothic bestiary), and upstairs The Voivodes Hall (which contains the portraits of the Princes of Moldavia and of the Kings of the Romanians) and The Henri Coandă Hall. The clock carillon installed in the central tower is a set of eight bells which reproduce every hour Hora Unirii (The Union Hora - a song which is sung and danced especially on January 24, when Romanian United Principalities united in 1859).


About the stamps
On the postcard 1940
The stamp, depicting Common Lungwort (Pulmonaria officinalis L.), is part of the first series Flora of Romania - Fauna flowers (I), about which I wrote here.

The stamp was issued on September 14, 2006, on the occasion of celebrating one century since the foundation of the Romanian Lottery.

On the postcard 3284
About the stamp, depicting the Castle Mimi, I wrote here.