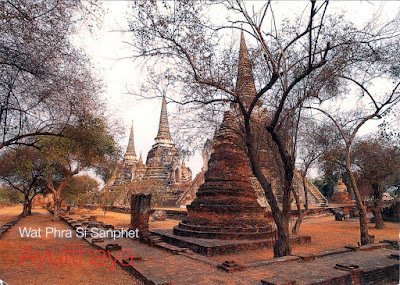 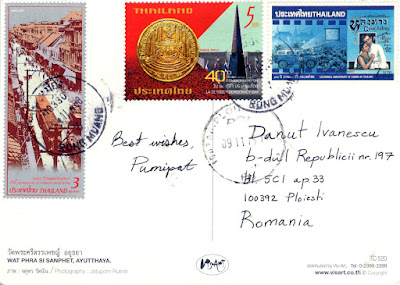 Founded in 1350  in the valley of the Chao Phraya River by King Uthong and proclaimed the capital of the Ayutthaya kingdom or Siam, Ayutthaya reached around 1700 CE a population of 1,000,000, making it one of the world's largest cities at that time. Unfortunately in 1767 was destroyed by the Burmese army, resulting in the collapse of the kingdom. The ruins of the old city, characterised by the prang (reliquary towers) and gigantic monasteries, give an idea of the city's past splendour, and are preserved in the Ayutthaya historical park.


Wat Phra Si Sanphet (Temple of the Holy, Splendid Omniscient) was the holiest temple on the site of the old Royal Palace in Ayutthaya, and also the grandest and most beautiful temple in this capital, serving as a model for Wat Phra Kaeo in Bangkok. It was the temple of the royal family, used exclusively for royal ceremonies. King Ramathibodi II built in 1492 two Stupa (known in Thailand as Chedis), where the ashes of his father, King Borom Trailokanath, and his brother, King Borommaracha III were buried.

In 1499 a viharn, or hall of worship, called Vihara Luang (Royal Chapel) was built on the palace grounds. King Ramathibodi II gave orders for a gigantic image of Buddha to be cast, and installed in Wat Si Sanphet. This image of Buddha was 16m high, covered with 343kg of gold, and the pedestal was 8m in length. This statue, called Phra Si Sanphetdayan, was the main object of veneration within the royal chapel. Another Chedi was built under King Borommaracha IV in 1592.

In 1767, the Burmese conquered the capital of Ayutthaya and began the extensive destruction and looting of numerous temples and other buildings, including the Wat Phra Si Sanphet. They set the building on fire and melted the gold. The three Chedis were destroyed in the process, but restoration work began in 1956. The chedi is built in the classic, Ceylonese design that is reminiscent of a bell. In every direction small chapels are recognized, their roofs being topped with a miniature Chedi.

The first stamp was issued on February 5, 2011, to celebrate the 150th Anniversary of Charoen Krung Road, a major road in Bangkok.

The second stamps was issued on October 14, 2013, to mark the 40th Commemoration 14 October Democracy Day.  The popular uprising of 14 October 1973 was a watershed event in Thailand's history. The uprising resulted in the end of the ruling military dictatorship of Anti-Communist Thanom Kittikachorn and altered the Thai political system.