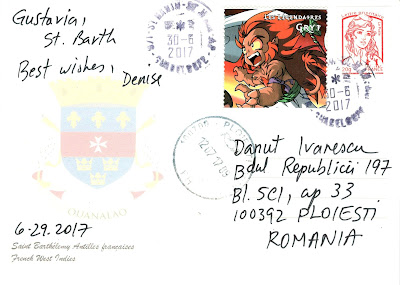 Gustavia, the main town and capital of the island of Saint Barthélemy, is known as a haven for yachting, with many events being held there each year. One of the most important is St Barths Bucket Regatta, which is taking place every year over three days, usually in the month of March. It is open to cruising yachts whose length is 30.5m (100ft) or greater. The first regatta in St Barths itself was held in 1995 with four yachts; ten years later, 26 boats competed in the race, and in 2017 no less then 38.

Parsifal III is a 54m (177.17ft) ketch sail yacht with a Displacement hull built by Perini Navi and launched in 2005. She features exterior styling by Perini Navi, and engineering by Perini Navi & Ron Holland Design. The yacht's interior has been designed by Remi Tessier. Its interior layout sleeps up to 12 guests in 5 rooms, and is capable of carrying up to 9 crew onboard, being so one of the most sought after and versatile sailing yachts on the charter market.

About the stamps
The first is part of a series of two se-tenant stamps, The Legendaries, designed by Patrick Sobral & Mathilde Laurent and issued on September 16, 2016. Each stamp is forms from two parts, and all four parts have a continuous design, which represents Danaël, Gryf, Jadina, Shimy, and Razzia, the five heroes of the comic book series The Legendaries created in 2004 by Patrick Sobral.

The stamp is part of the definitive series depicting Marianne, issued on  July 16, 2014, about which I wrote here.