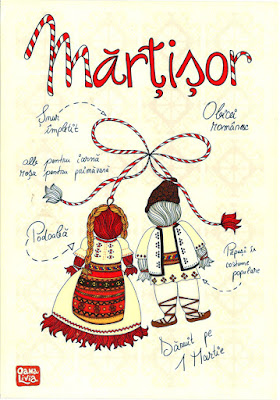 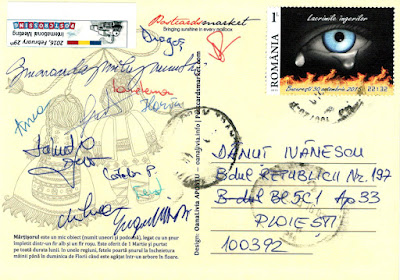 Mărțișor is a Romanian celebration at the beginning of spring, on March the 1st, in Romania, Moldova, and all territories inhabited by Romanians. The word Mărțișor is the diminutive of marț, the old folk name for March (Martie, in modern Romanian), and thus literally means "little March". It is a red and white string with value of talisman, a symbol of the coming spring, and in the past was believed that the wearer will be strong and healthy for the year to come.

Usually, both women and men wore it pinned to their clothes, close to the heart, until the last day of March, when they tie it to a fruit-tree twig. In eastern Romania (Moldova and Bucovina), a gold or silver coin was hanged on the string and was worn around the neck. After wearing the coin for twelve days, they would buy red wine and fresh cheese, according to a belief that their faces would remain beautiful and white as cheese and rubicund as the wine, all year.

Some ethnologists believe that Mărțișor has a Roman origin, while others believe it has a Daco-Thracian origin. Anyway, whatever the truth, both the Romans and the Thracians celebrated New Year's Eve on the first of March, along with the rebirth of nature. In some areas, Romanians still celebrate the agrarian New Year in spring, and the first days of March are considered days of a new beginning. Before March 1, women choose one of the first nine days of March (days named babele, which means "the old women" - with reference to Baba Dochia); the weather on that day would predict how year will go for them.

Initially, the Mărțișor string was called the Year's Rope (funia anului, in Romanian), made by black and white wool threads, representing the 365 days of the year. The Year's Rope was the link between summer and winter, black and white representing the opposition and the unity of opposites: light and dark, warm and cold, life and death. On the other hand, in Romanian folklore, seasons are attributed symbolic colours: spring is red, summer is green or yellow, autumn is black, and winter is white.

The custom was preserved, but over time Mărţişor has changed its shape, aspect and meaning. Nowadays, on March 1, Romanians buy silky red-white threads (șnur) tied into a bow to which a small trinket is attached (in shape of a flower, an animal, a heart, a chimney sweep etc, in the last decades even abstrat shape) and offer them to their (female) family members, friends and colleagues to show friendship, respect or admiration. Woe to the man who forgets to give Mărţişoare.

The custom of giving mărţişoare was inscribed in 2017 on the Representative List of the Intangible Cultural Heritage of Humanity, under the name Cultural practices associated to the 1st of March (Bulgaria, North Macedonia, Republic of Moldova and Romania).