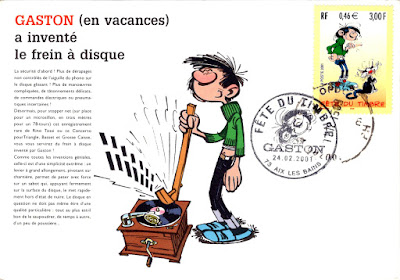 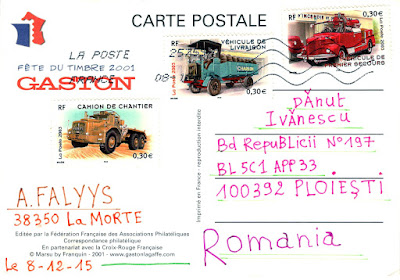 It was 1935 when the FIP proposed at its Congress in Brussels the creation of a stamp day in each of its member countries. The project was approved by the Congress of the FFAP in Paris in 1937, and the first day of the stamp took place in 1938. Since 1944 La Poste issued stamps devoted to the stamp day. From 1944 to 2002, a surcharge in favor of the French Red Cross was levied on the sale of these stamps. In 2000 the event was renamed The Stamp Feast.

To attract a young audience, since 1999 the stamps issued with this occasion have as theme the heroes from comics or youth literature. In 2001 the stamp depicts Gaston Lagaffe and his cat, and the maxicard showed "Gaston (on vacation) invented the disc brake". Gaston is a gag-a-day comic strip created in 1957 by the Belgian cartoonist André Franquin in the Franco-Belgian comics magazine Spirou. The series focuses on the everyday life of Gaston Lagaffe (whose surname means "the blunder"), a lazy and accident-prone office junior.

About the stamps
In addition to maxicard stamp on the front, which I mentioned previously, on the back are three stamps which are parte of the series Utility vehicles and larger scales - Youth Collection, about which I wrote here.

Email ThisBlogThis!Share to TwitterShare to FacebookShare to Pinterest
Etichete: FRANCE, Maxicards, Paintings and not only
Locaţia: Franţa