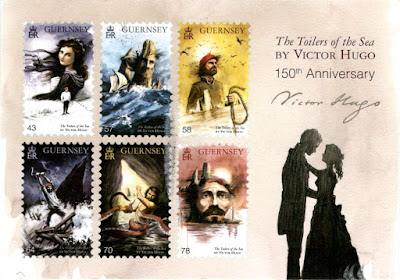 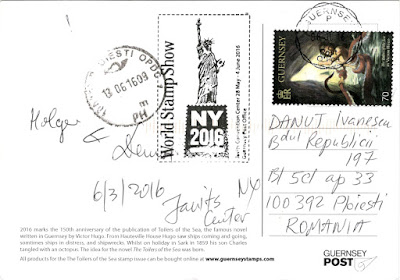 When Louis Napoleon (Napoleon III) seized complete power in 1851, establishing an anti-parliamentary constitution, Hugo openly declared him a traitor to France. He relocated to Brussels, then Jersey, from which he was expelled for supporting a Jersey newspaper that had criticised Queen Victoria and finally settled with his family at Hauteville House in Saint Peter Port, Guernsey, where he would live in exile from October 1855 until 1870.

From Hauteville House, Hugo saw ships coming and going, cometimes ships in distress, and shipwrecks. In 1859 he spent a holiday in Sark. There his son Charles tangled with an octopus. An idea for a novel was born. In 1864 Hugo began to write The Toilers of the Sea, which will be published in 1866 in Brussels. Hugo uses the setting of a small island community to transmute seemingly mundane events into drama of the highest calibre.

On May 6, 2016, the Guernsey Post issued a series of stamps (and a postcard depicting these stamps) to mark the 150th Anniversary of The Toilers of the Sea. Designed by Keith Robinson, the six stamps presents the following scenes:
• Gilliatt the Fisherman (43p)
• Durande Wrecked (57p)
• The Great Storm (58p)
• A Great Storm (64p)
• Devilfish Octopus (70p) - It's on the postcard 2717
• Deruchette sails away (78p)