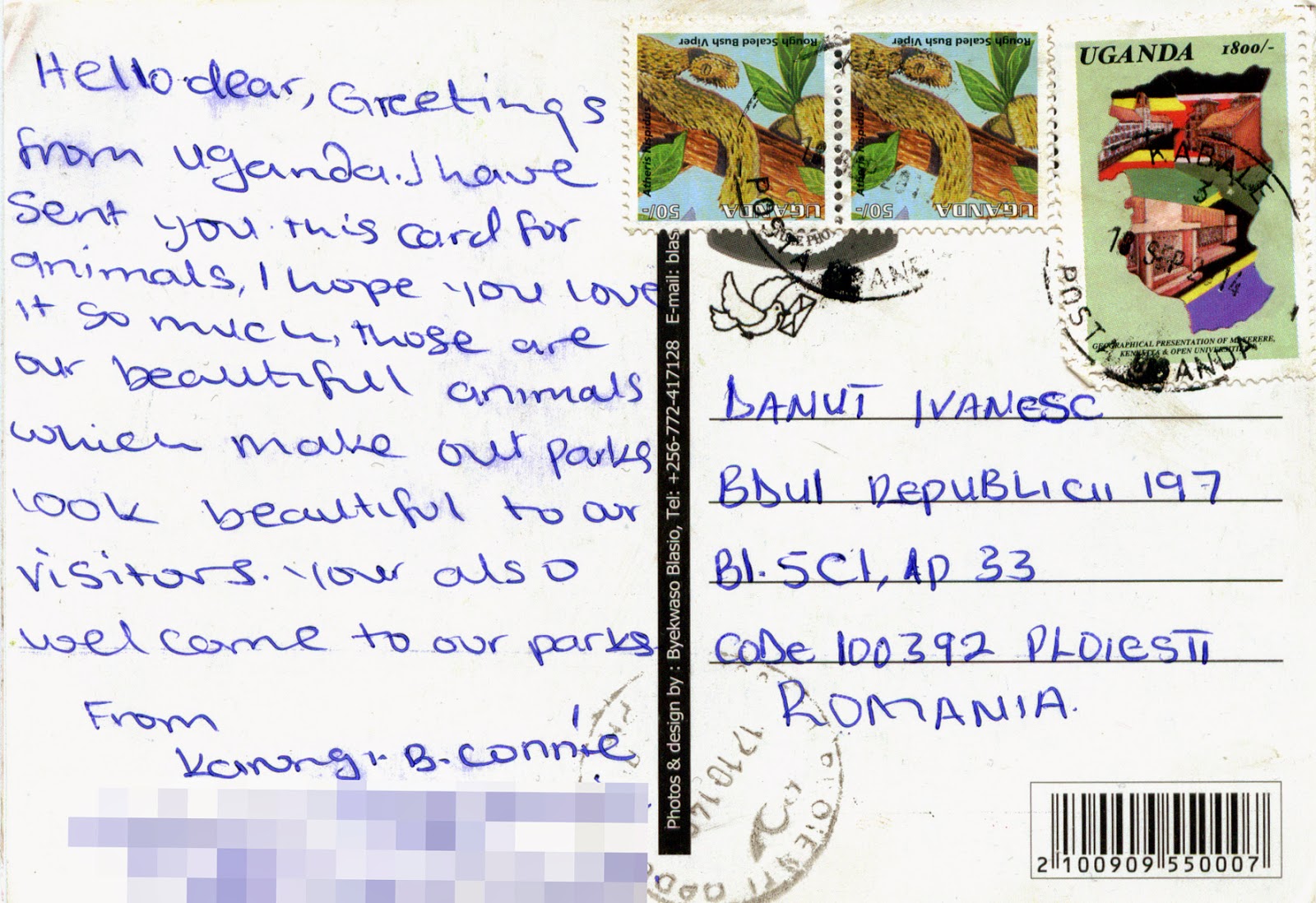 Posted on 29.12.2014, 09.01.2016
Located on the East African plateau, almost completely within the Nile basin, Uganda has an average altitude of about 1,100m, its slopes descending to the Sudanese Plain to the north, while its centre is dominated by  Lake Kyoga, surrounded by extensive marshy areas, and in south occupy a part of the shore of Lake Victoria. Although generally equatorial, the climate is not uniform as large variations in the altitude modify the climate. Therefore, it is no wonder that the country has 60 protected areas, including ten national parks, and two UNESCO World Heritage Sites, being home to a vast number of species of plants and animals. In the postcard are four of the most popular species to live in this country, four of the "big five" (missing only the African leopard). 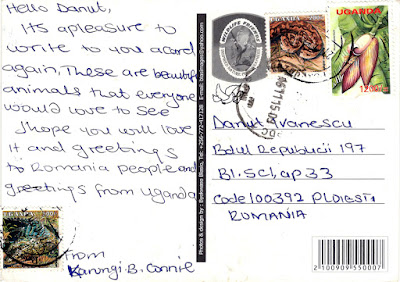 Lion (Panthera leo) - is the second-largest living cat after the tiger. Wild lions currently exist in sub-Saharan Africa and in Asia, and are apex and  keystone predators. Until the late Pleistocene, about 10,000 years ago, it was the most widespread large land mammal after humans. They typically inhabit savanna and grassland, are unusually social compared to other cats, and live for 10-14 years. Groups of female lions typically hunt together, preying mostly on large ungulates. Sleeping mainly during the day, they are primarily nocturnal, although bordering on crepuscular in nature. It is listed as vulnerable by the IUCN.

African elephants - are two extant species: the African bush elephant (the largest living terrestrial animal) and the smaller African forest elephant. They are considered to be keystone species due to their impact on their environments, and can live up to 70 years. Their thickset bodies rest on stocky legs, they have concave backs, and their large ears enable heat loss. Their incisors grow into tusks, which can serve as weapons and as tools for moving objects and digging. The largest recorded individual stood 4m at the shoulders and weighed 10t. It is listed as vulnerable by the IUCN.

African buffalo (Syncerus caffer) - it is not closely related to the larger wild Asian water buffalo. Owing to its unpredictable nature, which makes it highly dangerous to humans, it has never been domesticated. Its shoulder height can range from 1 to 1.7m and its head-and-body length can range from 1.7 to 3.4m. A characteristic feature of its horns is that they have fused bases, forming a continuous bone shield referred to as a "boss", which can't always be penetrated even by a rifle bullet. It is listed as least concern by the IUCN.

Common hippopotamus (Hippopotamus amphibius) - is the third-largest land mammal (after elephant and rhinoceros), and lives in sub-Saharan Africa. The name comes from the ancient Greek for "river horse". Despite its physical resemblance to pig, its closest living relatives are cetaceans, from which it diverged about 55 million years ago. It is semiaquatic, and during the day it remains cool by staying in the water or mud; reproduction and childbirth both occur in water. It emerge at dusk to graze on grasses. Though it is mostly herbivorous, is by nature very aggressive. It is listed as vulnerable by the IUCN.

Leopard (Panthera pardus) - is one of the five "big cats" in the genus Panthera, and has a wide range in regions of sub-Saharan Africa, West Asia, the Middle East, South and Southeast Asia to Siberia. Its fur is marked with rosettes similar to those of the jaguar, but the leopard's rosettes are smaller and more densely packed, and don't usually have central spots as the jaguar's do. Leopards are agile, opportunistic and stealthy predators, elusive, solitary and largely nocturnal, and have a very broad diet. It is listed as near threatened on the IUCN.

Nile crocodile (Crocodylus niloticus) - it may be considered the second largest extant reptile in the world, after the saltwater crocodile. It is quite widespread throughout Sub-Saharan Africa, and lives in different types of aquatic environments such as lakes, rivers and marshlands. On average, the adult can range between 2.8 and 5m in length and weigh around 70 to 700kg. It has thick scaly skin that is heavily armored, is an opportunistic and enduring predator and a very aggressive species, and is generalists, taking a variety of prey. It is listed as least concern by the IUCN.

Ugandan Kob (Kobus kob thomasi) - is a subspecies of the kob, a type of antelope found in sub-Saharan Africa in Sudan, Uganda, Democratic Republic of Congo and Ethiopia. It is normally reddish-brown, in which it differs from other kob subspecies. An Ugandan Kob appears on the coat of arms of Uganda. They are found in wet areas, where they eat grasses, are diurnal, but inactive during the heat of the day, and live in groups of either females and calves or just males. These groups generally range from five to 40 animals. It is listed as least concern by the IUCN.

Hartebeest (genus Alcelaphus) - is a grassland antelope, which form herds of 20 to 300 individuals, and inhabits savannas, woodlands, and open plains. Adults stand over 1m at the shoulder. Males weigh 125 to 218 kg, and females are slightly lighter. The coat colour varies between species, from the sandy coat of the western hartebeest to the almost black coat of the Swayne's hartebeest. Both sexes have horns; these grow 45-70cm long, with the shape varying greatly between species. Generally calm in nature, hartebeest can be ferocious when provoked. It is listed as least concern by the IUCN.

Plains zebra (Equus quagga) - is the most common and widespread species of zebra. It ranges from the south of Ethiopia to Botswana and eastern South Africa. Adults can stand from 1.1 to 1.45m high at the withers, and weigh 175 to 385 kg.  The striping pattern is unique among ungulates in the region, and its functions are disputed. They generally avoid desert, dense rainforest and permanent wetlands. They forms harems with a single stallion, several mares and their recent offspring, and groups may come together to form herds. The harem stallion attacks predators to defend his harem. It is listed as least concern by the IUCN.

About the stamps
On the postcard 1383

The second is geographical presentation of Makerere, Kenyatta & Open University.