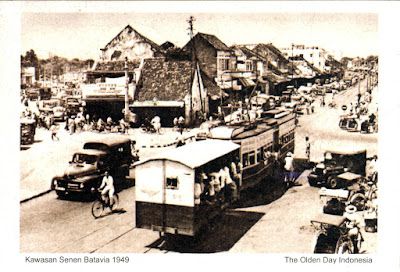 Batavia was the name of the capital city of the Dutch East Indies, and corresponds to the present day city of Jakarta. It was established on the site of the razed city of Jayakarta by the Dutch in 1619, and this name was retained until full Indonesian independence was achieved and Jakarta was officially proclaimed the national capital (and its present name recognized) on December 27, 1949.

Senen (meaning Monday in Indonesian) is one of the historic subdistricts of Central Jakarta. The historic part of Senen is mainly concentrated on the Senen administrative village, developed in 1733 after the Dutch government built the new town, Weltevreden, in south of Batavia. Some of the important landmarks of the Senen subdistrict are the Museum of Indonesian National Awakening and the Faculty of Medicine of the University of Indonesia.

In Batavia, a horse tram service started in 1869. A steam tram ran from 1881, and electrification followed in 1897. All Jakarta trams were discontinued in the 1960 due to pressure from president Sukarno which saw tram network as "antiquated" and "relic of colonial era".

About the stamps
The first stamp is part of the series Indonesian Traditional Foods, about which I wrote here.