Posted on 10.10.2015, 03.01.2016
Located on Elisabeta Boulevard, along the Black Sea, the Constanţa Casino is considered a symbol of the city, even if, unfortunately, in the last 20 years it has been left to decay. The construction of an edifice like the great European casinos started in 1904 after the plans of the Romanian architect Petre Antonescu, who designed a building inspired by the traditions of Romanian art. After completion of the foundations, the authorities hired the French architect Daniel Renard, who changed the plans in Art Nouveau style. 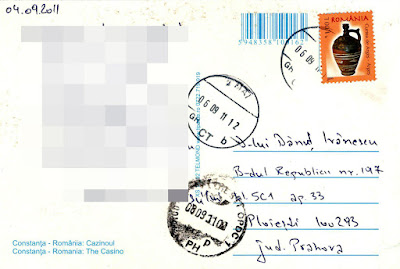 Built between 1908 and 1910, it functioned until WWI (1916), when it was converted into a military hospital. Bombed by German aviation, it was then devastated by German- Bulgarian troops. Restored in 1928, and in 1934 (by the same Daniel Renard), was bombed again at the beginning of WWII, and seriously damaged. After the war, the Soviet troops have looted the building. The communist regime transformed it in the House of Culture of the Unions since 1948, and in 1951 renovated the building. 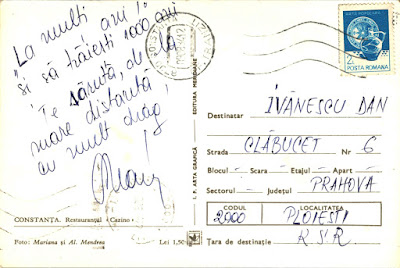 In 1986 was again renovated, this time by a group of Romanian artists. Were added Baroque frescoes, stucco, and stained glasses. The ground floor, surrounded by terraces with sea direct view, housed a billiards room and a room with round tables for card games. Upstairs, the ballroom was transformed from time to time in theater hall, and lovers of the nightscapes with moon mirrored in the sea waves could admire the view from the terraces, at the light of the lanterns.

About the stamps
On the postcard 1948 and 1949
The stamp is part of the third set of a very extensive series, entitled Romanian Pottery, about which I wrote here.