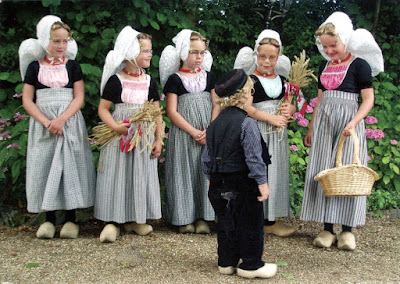 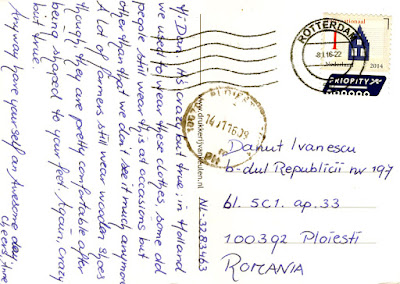 Located in the south-west of the country, the province of Zeeland consists of a number of islands and peninsulas (hence its name, meaning "sea-land") and a strip bordering Belgium. It is famous for the mussels and oysters from Yerseke, the dikes, dunes and the Delta Plan to prevent flooding (it lies below sea level), but also for the traditional costumes. Because the people were separated by water, each island developed its own typical costume. Especially the women's costumes could be easily distinguished from one another because they often wore completely different caps.

A distinctive feature of Zeeland's costume are the large white lace caps. It is striking to see that Protestant women in the former islands North and South Beveland wear shell-shaped caps, and Roman-Catholic women the square-shaped ones. In Walcheren, lace from the close-fitting hat flows loosely over the shoulders. Worn with a blue-and-white checked or striped apron, the dress includes a floral dickey. Spiral kissers are worn with the hat, a feature with all the costumes from the province of Zeeland.

Men’s traditional dress usually consists of a black jacket and trousers, enlivened by a brightly colored shirt, rows of silver buttons on the jacket, and a cotton scarf. The finishing touch may be a eye-catching, flat, round, black cap. With the exception of some elder women in Arnemuiden and on South Beveland, there are no people anymore who wear these costumes on a daily basis. However, klompen (clogs) are a different matter. Like windmills and tulips, klompen are a unniversally recognized symbol of the Netherlands.

About the stamps
The stamp is part of the series Dutch Icons, about which I wrote here.